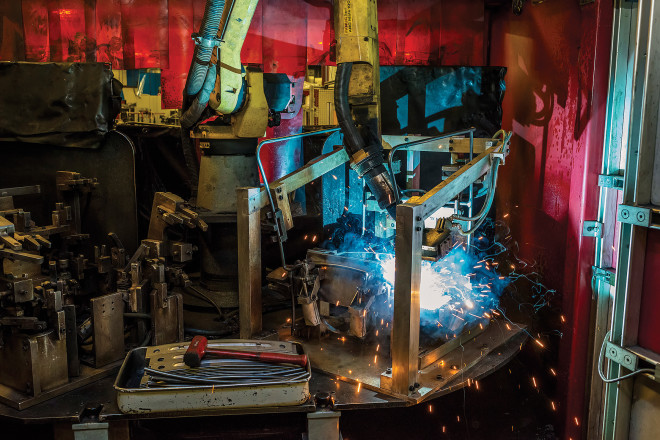 What is a business in Sturgeon Bay, Wisconsin, to do to stay in the game against fierce foreign competition?

That’s a question the team at WireTech Fabricators had to ask itself after it saw its high-volume grill business undercut and taken away by a Japanese manufacturer.

Well, you batten down the hatches and look for a business model that proves more valuable to potential customers than the cut-rate goods from overseas. 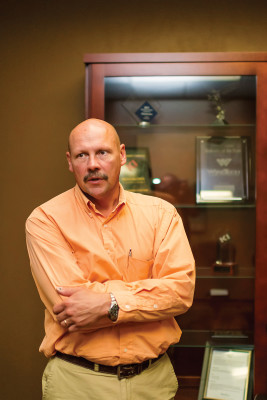 After losing the Weber grill account to the Japanese, WireTech co-owner Mike Baudhuin said, “We became a jack of everything, master of none. If it was metal, we would do it, low-volume, specialty-type stuff. We had some success in that, but we also recognized that there are only so many small customers we could serve. We started investing heavily in equipment and automation so we could go after much larger companies.”

And they went after those larger companies by becoming a collaborator rather than just a component supplier. Now they are the state’s leading supplier of custom fabricated wire products to industries such as lawn and garden, office furniture, food service, automotive and appliances.

Baudhuin said these are the questions they started asking:  “What are the key drivers in their business? Where are they going? How can we help? That’s really our market strategy. Get to know our customers very intimately, understand what their needs are and what’s driving their business and find ways to help them.”

But they also looked internally. How could they make their operation more efficient so that everyone is working smarter instead of harder? It meant a cultural change from top to bottom, including, ironically, adopting the lean manufacturing principles that were first introduced by the Japanese. 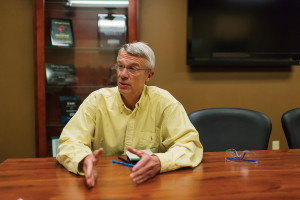 “In the old days you’d buy a Chevy because your dad bought Chevys, and his dad bought Chevys,” Baudhuin said. “Today the buying decision-making is more about the value proposition. What we see from the companies we serve, they’re making the value-based decisions. What am I getting for product? How good is it? What are the services surrounding it? And what’s the all-in cost?

“What’s happening with the offshore competition, companies are beginning to recognize that a little bit inferior product, a lot less flexibility for when they need it, offset a huge price differential,” Baudhuin continued. “When I say price, price is only about two-thirds of the total in cost. So they’re recognizing that the value proposition is better to buy domestic because there’s flexibility. Bob [Wirth, plant manger] and this team put together an operation here; we can spin this thing on a dime for our customers. You’re not going to spin it on a dime if it’s coming out of China. It’s on the ocean for weeks. Before they can even get an order placed to China, we’re shipping product.”

“Our response time makes all the difference in the world,” said Tom Lardinois, the other co-owner of WireTech. “If somebody asks, we have to respond because we’re all the way up here on the peninsula. We ship material up, and ship it out. There’s cost to that. So we try to offset it with those intrinsic values. That’s important.” 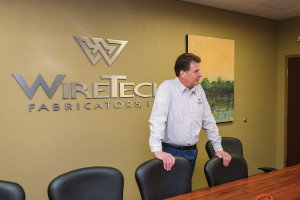 Having a work force that understands what the company is up against also makes a difference, both men said.

“Our work force, I’ve said it a number of times, I’ll take our team up against anybody in the world and I bet we’re going to win,” Baudhuin said. “We’ve got folks that understand our business and they understand the customer need. More than that, they’re dedicated and will work their ever-lovin’ tails off to make sure the customer gets what they need. Our job is to give our folks the training and tools, and then get the hell out of the way so they can get the job done.”

That is very evident on the clean, well-lighted floor of the WireTech plant in the Sturgeon Bay Industrial Park, which is separated into two “value streams” – one producing components for the outdoor power industry (frames for lawnmower bags, control levers for riding lawnmowers, etc.) and the other turning coils of heavier gauge wire into furniture (chairs, barstools).

“When we get a customer in here, we’ll land it,” said Plant Manager Bob Wirth. “Showplace ready all the time. That’s one of our themes here.” 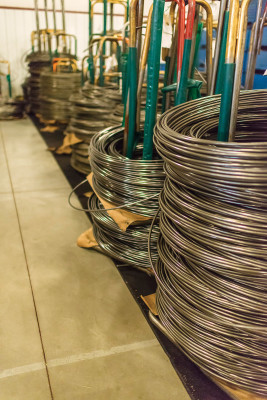 The company employs 80 to 90 people in the summer, but that jumps to 115 to 120 in the winter months when their customers are gearing up for the new season. WireTech runs two 10-hour shifts with four-day work weeks.

“But we’ve created the flexibility to run five days a week or weekends, whatever it takes,” Wirth said.

“People are more than willing to do that,” Baudhuin added. “If Walmart needs lawnmowers next week Thursday, everybody knows it’s a working weekend.”

Wirth said the company took a good long look at everything from the design of the work cells to recycling.

The company has also adopted an entrepreneurial attitude by taking control of its own tool needs.

“We’re self-sustaining. We make all our tools. We’ve got a tool and die shop right here,” Wirth said. “The guys in there take it from the plan to execution. We build everything in house now, which creates a lot faster turnover. It’s a sense of urgency to get the job done, the killer instinct. If we don’t do that, we will be beat at the crossroads.”

Adopting lean principles has meant cutting down on inventory.

“We used to have a lot of overstock. We used to buy in volume. Streamlining that down helps the process,” said Charles Amundson, a second shift supervisor. 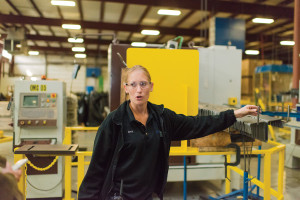 Cell operators were consulted during a recent redesign of the plant working areas.

“In redesigning the factory, we tried to make everything work in a smaller area to make it more efficient for our operators so they don’t have to do so much traveling,” Amundson said.

“That’s something new to us,” she said. “We recycle almost everything, from the plastic wrappers that cover the wire to cardboard that we reused for many different things.”

“We went from 40 bags of garbage that I would dump at the end of the week to, I would say, maybe six bags,” Amundson said. “We didn’t think we had that much to recycle until we started doing it. It’s amazing.” 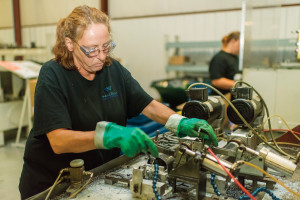 WireTech’s efforts in that direction led to it being named a Green Tier company, meaning it exceeds environmental requirements set by the Wisconsin Department of Natural Resources.

Since the company started focusing on its environmental footprint about a year ago, WireTech has more than doubled the amount of material it recycled. It went from producing 37 cubic yards of trash every month – almost enough to fill two and a half dump trucks – to just 17.

“I’m very proud of where we are,” Wirth said. “That’s what drives us, continuous improvement. And it’s not just team leaders or upper management. It’s everybody. It’s a team effort. We really focus on that. That’s what makes us better. It’s a culture and we have to sustain that culture or we get passed.”

“Through the efforts of lean principles, technology and automation, that’s how we’re beating foreign competition, low-cost Asian producers,” Baudhuin said. “They’re still out there, but they’re slipping. As soon as they slip, we’ll just help them to the ground a little quicker.” 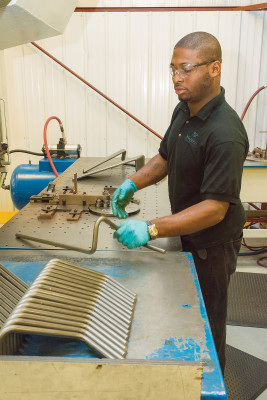 The business known today as WireTech Fabricators, Inc., began life in the early part of the 20th century as the Economy Electric Lantern Co. in Milwaukee.

“During World War II, ships were being produced in Sturgeon Bay, so they relocated the lantern business here so they could go on the ships for overseas,” said WireTech co-owner and Vice President Mike Baudhuin. “In the early ’60s, the company was purchased by our predecessors, my grandfather, dad and uncle. They renamed it Dorco and branched out from the lanterns into lazy susans, candelabras, housewares, food service-type stuff, and tried to sell it under their own brand. It wasn’t successful because they had a narrow offering of products. They got into the job shop world, producing housewares and food service items for other companies. And then they got into the barbecue grill business. When Weber grills started taking off, they were producing for Weber, and that mushroomed into a job shop-type business.”

He and Tom Lardinois bought the business in 1992, and changed the business name to WireTech Fabricators in 1998.

“We kind of reinvented the company a couple times since then,” Baudhuin said. “The one constant in our company is change. We’re constantly reinventing ourselves in how we better serve our customers.”

Since moving to Sturgeon Bay, the company had operated on the east side of the city, in what grew into a residential neighborhood on 6th Avenue.

Looking at options for growth, WireTech worked with the city and the Door County Economic Development Corporation to build a new $3 million, 66,500-square-foot plant in the Sturgeon Bay Industrial Park, while also working with the Wisconsin Housing and Economic Development Authority to turn its former site into what is now known as the Sunset Hill subdivision, a 17-lot single family housing development.