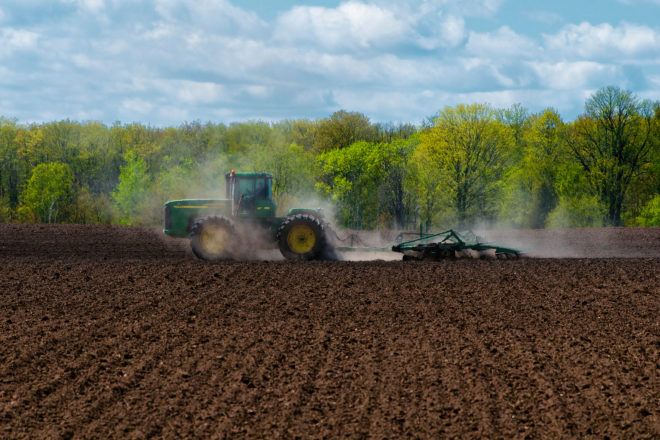 Wisconsin’s agriculture industry grew 18.6 percent to $104.8 billion between 2012 and 2017 amid perpetually low commodity prices, according to a new report from Steven Deller of the University of Wisconsin-Madison’s Center for Community and Economic Development. As farmers face record bankruptcies and increasing debt loads, the report reveals a sharp divide between food production and food processing in Wisconsin.

“Farming remains a very unstable industry, and prolonged periods of weak commodity prices are resulting in a particularly high period of economic stress,” Deller wrote. “At the same time, food processing is going through a period of strong growth.”

Food processors include businesses such as cheesemakers and bakeries that use the commodities grown by farmers in their production. Although net farm income in Wisconsin has declined since prices for products such as milk dropped around 2014, food processing has seen sustained growth since 2010.

“Since the end of the Great Recession, Wisconsin’s food-processing sector has seen its largest growth in several decades,” Deller wrote. “The growth in food processing is reflective of changing consumer preferences for prepared meals.”

Food production has shown little growth during the past 50 years. Since 1963, the entire Wisconsin economy grew 298 percent, but farm production grew only 10.3 percent during the same period while income has remained flat. The past five years of depressed prices have exacerbated this trend.

“The successive ‘down’ years are the primary cause for the current fiscal stress facing many Wisconsin farms,” Deller wrote. “Without an ‘up’ year to rebuild assets, farmers are forced into dramatically reducing income to the farm household and/or accepting higher levels of debt.”

The same disparity between food production and food processing is seen in employment. Since 1963, on-farm employment has declined 13 percent while food-processor employment has grown 25 percent, with most of that growth occurring during the past decade.

It is unclear whether continued weak farm income and production will threaten the growth in the food-processing industry.

“While one could argue that a reduction in on-farm production might strengthen commodity prices and help remaining farmers strive to return to some acceptable level of fiscal health, such a reduction may place undue pressure on food processors,” Deller wrote. “There is a clear balancing act between ensuring a healthy farm economy while continuing to promote growth in food processing.”