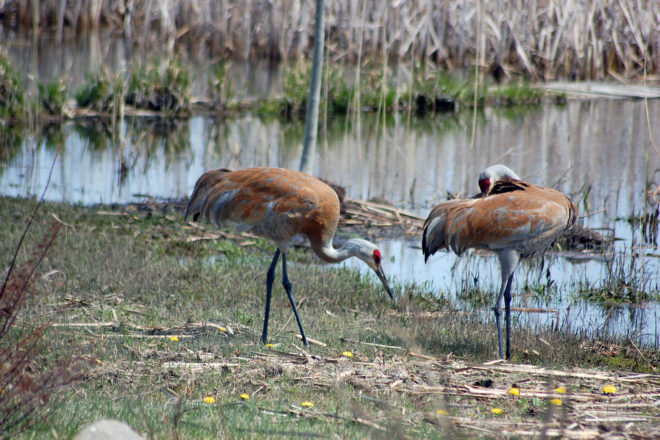 A pair of sandhill cranes going through the lengthy process of camouflaging their gray feathers with wetland mud. Photo by Jim Lundstrom.

“When we hear his call we hear no mere bird. We hear the trumpet in the orchestra of evolution. He is the symbol of our untamable past, of that incredible sweep of millennia which underlies and conditions the daily affairs of birds and men.”

– Aldo Leopold on the call of the sandhill crane

When Aldo Leopold wrote the above quote in his 1937 essay “Marshland Elegy,” there was an estimated 25 pair of nesting sandhill cranes in Wisconsin. Leopold had little hope that the population would recover and also wrote in that essay, “The last crane may well trumpet his farewell and spiral skyward from the great marsh.”

Due to hunting and the loss of wetland habitat, the sandhill crane was an endangered species in Leopold’s time, but today it is considered a conservation success story. According to the International Crane Foundation, the sandhill crane population today is 650,000, which makes it the most numerous of the world’s cranes. 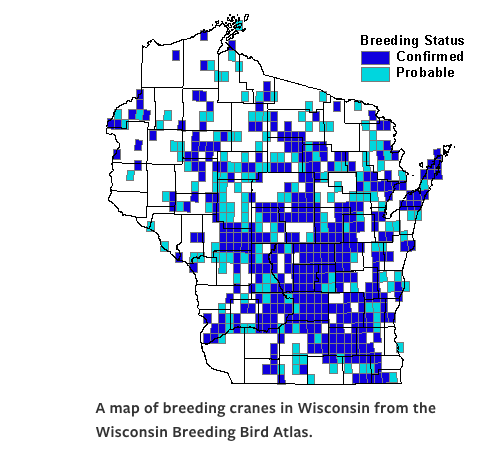 Some say there are too many sandhill cranes. Farmers especially take issue with the number of sandhill cranes because the birds like to eat freshly planted corn.

According to the Wisconsin Conservation Congress (WCC), 17 states have a sandhill crane hunt, including two states in our flyway – Kentucky and Tennessee. Hunters refer to the big cranes as “ribeye in the sky.”

Next month the WCC convenes with meetings in all 72 counties on April 10 to answer 88 questions, including whether Wisconsin should have a sandhill crane hunt. It’s not the first time the question has come up. In fact, WCC voters have voted several times in favor of a sandhill crane hunt, most recently in 2015, with 2,255 voting in favor of the hunt and 1,554 against. In Door County the vote was 22 for and 16 against.

Kleefisch originally used agricultural crop damage by the cranes as a reason to hold a hunting season, but it was subsequently revealed that in his initial meeting with the Department of Natural Resources regarding the hunt, Kleefisch said it was his interest in hunting that led to the bill.

In 2013, the U.S. Fish and Wildlife Service office in Wisconsin received 265 complaints regarding sandhill crane damage to field crops, with a reported damage estimate of $1.9 million.

The International Crane Foundation (ICF), based in Baraboo, Wis., lists a number of reasons on its website (savingcranes.org) why it opposes a Wisconsin hunting season, particularly, they say, because “Hunting is not a solution for sandhill crane crop damage.”

The ICF played a role in developing Avipel, a bird repellent that can be used on newly planted seeds. Birds who eat seeds treated with Avipel experience “an unpleasant, but harmless, gut reaction they associate with the location,” according to Arkion Life Sciences, makers of Avipel. Last year, 125,000 acres of Wisconsin cropland featured seeds that had been treated with Avipel.

However, farmers say the cost of Avipel – reported to be anywhere from $6 to $12 an acre – is burdensome.

Farmers can apply for a federal permit to hunt sandhill crane when they are damaging crops, but only after the farmer has proven that he has exhausted all other nonlethal options.

Finally, here is what the Wisconsin Society for Ornithology has to say about the proposed hunt: “Not all animal species need to be managed with a goal of having a sufficient population so that they can be hunted. Aldo Leopold was a hunter for much of his life. He also wrote the first widely used textbook on wildlife management, and held the world’s first academic chair in wildlife management at the University of Wisconsin, teaching that subject and ecology for many years. …He realized that our relationship to the natural world – to the land – is much, much more. It underpins how we live our lives at a deeper level, beyond the strictly utilitarian concerns of natural resources policy, or wildlife management. Leopold intuited that ethics compels people to work together so that all in the community could benefit. One of his main points was that the community was not composed of humans only, but that it included other elements such as soils, waters, plants, and animals; or collectively: the land.…Perhaps we can take Leopold’s implicit guidance and learn to see some species truly as fellow members of the community that we love and respect. The Sandhill Crane is a symbol, one that reminds us of Leopold, one that reminds us of his teachings, and one that we can hold onto and protect. That may be enough.”

Here are a couple more of the 88 questions coming before the WCC:

You can see all the questions here, dnr.wi.gov/About/WCC/springhearing.html. The Door County WCC meeting is at 7 pm on April 10 in the Sturgeon Bay High School Commons. The Kewaunee County meeting is the same date and time at Kewaunee High School.