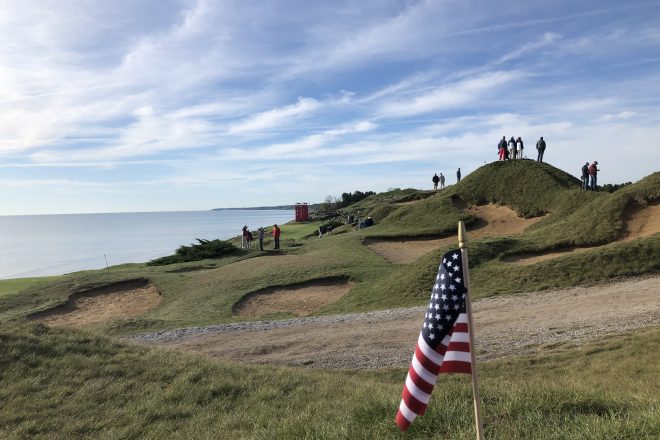 A golf fan left this small U.S. flag in the rough along the fourth hole at Whistling Straits during the Friday Ryder Cup matches. The American team, coached by Edgerton, Wisconsin, native Steve Stricker, set a record for the most points amassed during the three-day event. Photo by Craig Sterrett.

A public servant and avid golfer from Sturgeon Bay had a deep desire to drive to Whistling Straits to see the best golfers in the world compete in the Ryder Cup because he said such a collection of amazing players would never return to the spectacular lakeside course northeast of Sheboygan. But he was on call during that historical weekend in late September. He missed his one chance.

He talked about how Pete Dye created the Scottish-style, sandy, dune-filled masterpiece from flat land formerly occupied by Camp Haven. I told him it amazes me that there is not one hole on that course that seems like an afterthought. Any of them, on their own, could be the best and toughest hole on any golf course anywhere. I told him there will be other tournaments that he can see at Whistling Straits.

Such a sense of urgency is not uncommon among golfers at this time of year in northeastern Wisconsin, but unlike the Ryder Cup, golfing opportunities won’t pack up and leave. Though courses gradually close for the season and many groundskeepers start to park the greens mowers by November, those courses will reopen again after the winter.

Though short, the fall golf season in Door County provides some of the most wonderful weather and most stunning scenery of the year. As the leaves are changing colors, golfers can also find some of the best rates of the year as many courses offer fall specials.

Here’s how late into the fall and winter you can find a tee time:

• Peninsula State Park Golf Course’s final day of the season will be Oct. 30.

• On Washington Island, Dan and Trudy Schelitzche are closing Deer Run for the season Oct. 16. The resort owners are also retiring 25 years after purchasing, restoring and partially redesigning the course. They’re working to sell the property so that the course, pro shop and hotel can continue to serve residents and vacationers.

• Nearby at Stone Hedge, Jon Oswald lets golfers play anytime when the weather allows and the turf isn’t soft and easily damaged. Some years he closes after snow covers the course, but he left the flags in all winter in 2020-21. Oswald already has fall rates in place: unlimited golf for a day for $10 walking or $20 riding. If the pro shop is closed, golfers can put money through a slot on the honor system.

• In the Sturgeon Bay area, Idlewild has no announced closing date. Cherry Hills has Nov. 7 penciled in as its last day, but the course sometimes reopens when the weather is accommodating.

• At 27 Pines, Tom Schmelzer keeps the clubhouse and pro shop open for Christmas shoppers, and he allows golfers to pay and play anytime. He said he had some “diehards” who showed up all last winter to use the course and driving range, and they carefully swept a track to the cup on four greens at the course last year. They played those holes over and over.

• In Baileys Harbor, Maxwelton Braes owner Jim Bresnahan said he typically closes the clubhouse during or after the first week of November, but if the weather’s great, he’ll reopen and rent out carts. He also allows golfers to pay and play (walking only) on the honor system.