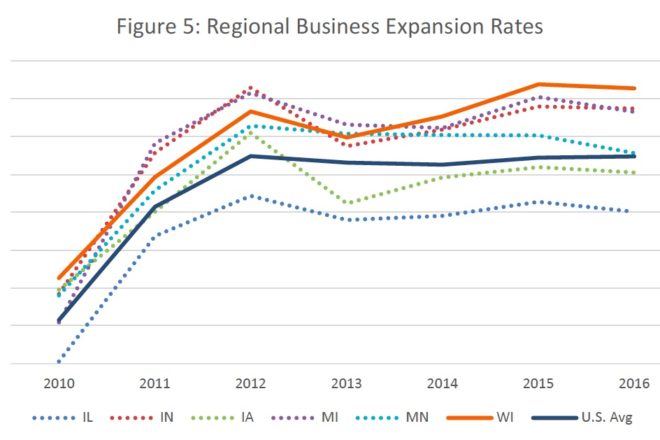 by Tessa Conroy and Chad Chriestenson, UW-Extension’s Center for Community and Economic Development

Wisconsin led the Midwest in the rate of expansions by existing businesses during the last three years for which data are available, according to a new report from the UW-Extension’s Center for Community and Economic Development. Wisconsin ranked first among six Midwestern states in the rate of business expansions in four of seven years between 2010 and 2016.

However, due to contraction and firms going out of business, this record of expansion has not translated into much employment growth. Between 2010 and 2016, the net gain in employment was 24,776 jobs, or 1 percent of total employment. Still, expansion of existing businesses produced nearly two and a half times more jobs than the birth of new businesses, indicating that expansion may have greater employment potential.

Startups drive job growth, but they are vulnerable to employment contraction or shutting down. Meanwhile, large, established firms add more absolute jobs, but at slower rates. Expansion and employment data across industries reveal this trend.

In 2015-16, five sectors created 58 percent of new jobs through business expansion: manufacturing (29,760 jobs); health care and social assistance (24,351); retail trade (21,121); accommodation and food services (18,507); and construction (14,088). Although manufacturing leads this list, it ranks sixth in the number of expanding businesses – again indicating that large, established firms add more new employees but do not expand as frequently.

“Encouraging successful firms to expand, and/or helping stabilize firms that may otherwise contract, leads to more overall economic stability, a key measure of risk,” the report said. “Lower-risk business environments are not only likely to attract more entrepreneurs, [but] they also have the potential to produce more funding for startups and young, successful firms.”

The Center for Community and Economic Development is the UW-Extension outreach unit that provides applied research, educational programs and assistance on community and economic development to individuals, local governments and community organizations.