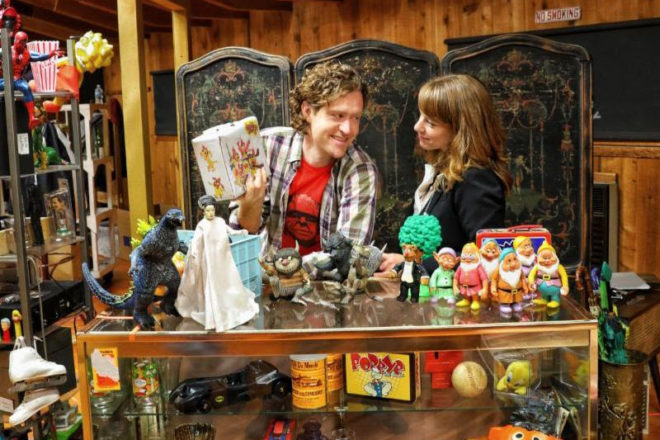 Peninsula Players Theatre presents the Wisconsin première of Salvage, a new play by Michigan playwright, Joseph Zettelmaier. Salvage opened Sept. 5 and will be performed through Oct. 14.

Salvage centers around Jason Byrnes, the proprietor of a Detroit collectibles shop. Every nook and cranny of his dream store, Hidden Treasures, is brimming with vintage monster movie figurines, collectible comic books, autographed photos and classic movie and sports memorabilia. While some people call these items junk, Jason considers them art. Salvage is intertwined with drama, comedy, mystery and romance.

“I feel like that’s actually a pretty good description of it,” Zettelmaier said in an interview with the Detroit News. “The reason it’s called Salvage is because it’s about trying to salvage our lives when the world that we thought we were supposed to be living in turns out that it’s not that world at all.”

Salvage performs Tuesdays through Sundays at 7 pm, except for Sept. 9, 23 and Oct. 14 at 3 pm. A post-show discussion will be held Sept. 8 with the creative team and cast. For information or tickets, call 920.868.3287 or visit peninsulaplayers.com.