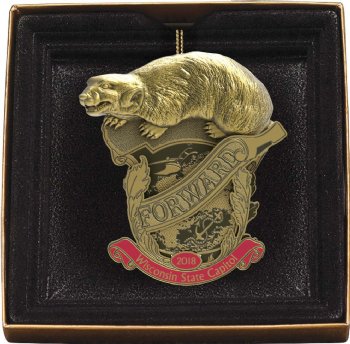 The 2018 Wisconsin State Capitol ornament is now available for order. This year’s ornament is a tribute to the badger statue located at the entrance to the governor’s office on the first floor of the State Capitol. The bronze statue was created as a gift from the people of the state of Wisconsin for the battleship USS Wisconsin in 1899. The badger statue was designed by artist Paul Kupper of Milwaukee for the USS Wisconsin and made with bronze salvage from Spanish cannons captured in Cuba during the Spanish-American War. The statue was designed to include the state motto “Forward.” The shield also holds a plow and fouled anchor, which were part of the “arms of the commonwealth.” The statue was placed on the bridge of the ship located directly above the 13 guns. Order your ornament at wisconsinhistory.org.