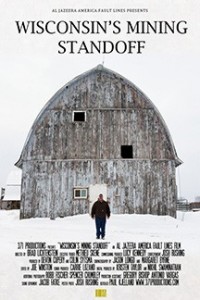 A documentary film about Gogebic Taconite’s (GTAC) controversial proposal to dig an open-pit iron mine in northern Wisconsin will be the feature at the next Dinner and a Movie Night at Greens N Grains Cafe on Jan. 22. The 25-minute film will be followed by a community discussion.

Produced and directed by Milwaukee-based 371 Productions, Wisconsin’s Mining Standoff takes viewers to Ashland and Iron Counties, where Cline Resources’ subsidiary GTAC has set off a battle over the state’s natural resources by proposing to dig what could be one of North America’s largest open pit mines in Wisconsin’s Penokee Hills.

The film explores the potential impacts of the mine and how legislation changed the state’s mining laws. This is a story about money and power versus environmental concerns and a way of life for thousands of local residents. It’s a story ultimately about the state of our democracy.

Greens N Grains Cafe offers a natural and organic dinner special each evening before the film screenings. Enjoy a soup specialty, salad, a fresh baked roll and a cup of tea for $7.50, available from 6 pm on. The film screenings at 7 pm are free, but loft-area seating is limited to 30 people. Dinner and film reservations are advisable. RSVP by calling 920.868.9999 or emailing [email protected].