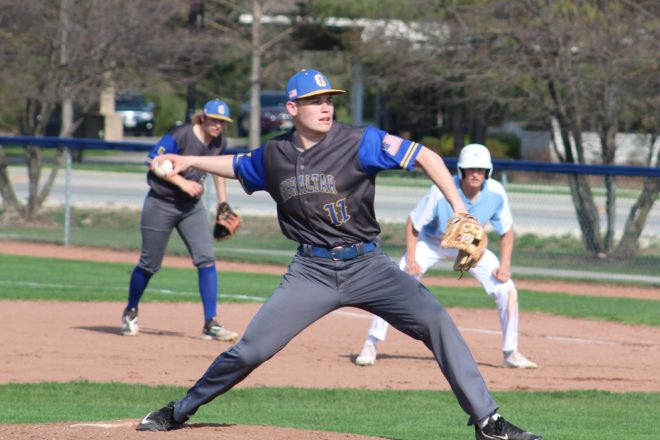 When this year’s Packerland All-Conference baseball team was announced, it put Gibraltar’s Sam Lindenberg in rare air. The infielder and pitcher was named to the All-Conference first team after finishing fifth in the conference in batting with a .480 average. He also helped to lead the Vikings to a WIAA Division 4 regional title.

But it isn’t just the baseball honor that puts him in select company. The selection came after he’d earned not just first-team All-Conference honors in football and basketball, but also Player of the Year honors in both of those sports.

Lindenberg, a 6-2 guard, averaged 20.4 points, 6.1 rebounds and 4.2 assists per game in leading the Vikings to their first appearance at the WIAA state basketball tournament. He now hopes to earn a spot as a walk-on at Division III UW-La Crosse.

In hopes of improving his chances, Lindenberg turned down an opportunity to play summer baseball this year to focus on getting in condition to become bigger, stronger and faster for the next level. UW-La Crosse competes in the Wisconsin Intercollegiate Athletic Conference. The Eagles went 21-7 overall last season and advanced to the second round of the NCAA Division III tournament.

Lindenberg, who plans to major in exercise science and minor in business at UW-La Crosse, is following in the footsteps of his mother, Trish, who also attended the school.

Lindenberg’s basketball coach, Justin Burress, said Lindenberg is very coachable and has a tremendous work ethic – he’s the first in the gym and the last to leave. Those traits will suit him well at the next level.

For now, three All-Conference teams, two Player of the Year awards, and a trip to state make for a pretty complete year.