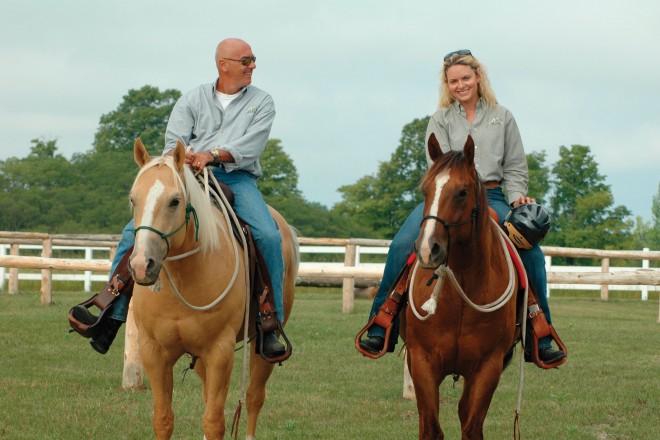 As you drive through the gate and pass along a row of young sugar maples, the A & A Ranch comes serenely into view. Made up of a stable/lounge, a large indoor training ring, a ranch house, and several out buildings surrounded by pastures, this ranch is new to Sister Bay but feels as if has been part of the land for decades.

Allen and Amy Musikantow became interested in horses about five years ago. Because most of the horse activity in the county is nearer to Algoma, it meant a 45-minute drive every time Amy or Allen wanted to ride. Before long it became clear that riding wasn’t merely a hobby; it was something altogether more consuming – they refer to it as “adult onset passion.” With this passion came the next logical step of finding a ranch closer to home. After looking around, they kept coming back to a 40-acre parcel of land adjacent to another a 40-acre parcel that they had purchased in 2002. Since the land had been the site for an airport with a gravel runway and an old hangar, there were many steps involved in converting it into their ideal ranch.

In April of 2004, the Musikantows began construction. It is a marvel that in the short space of a year a whole ranch was completed, but Amy laughingly attributes that to her husband. “Allen knows no speed but super fast!” Even with the speed in which the construction was completed, everything was done to their exact specifications and no detail was overlooked. They used mainly local contractors and specialists. “We always try to do everything locally,” Allen said. “Mike Lundquist did the plumbing, Action Electric did the electrical, Keller did the barn and we had Keith Bridenhagen help oversee everything.”

Allen and Amy were mindful of two major considerations while laying out the ranch – the horses and preserving Door County. “We had to sculpt the land so it would be just right for the pastures and the design of the ranch. Pat Hockers [of Hockers Excavating] did a great job for us,” Allen explained. Amy added, “We also planted grass, trees, natural herbs and rose hips. Everything is planted with the horses in mind. There is nothing poisonous anywhere on the property.” They even used reconstituted asphalt to reduce the amount of dust, which is a greater pollutant than most realize.

The design of the stable was greatly influenced by Amy and Allen’s participation in The Parelli Program, which was founded by Pat Parelli and uses a different philosophy in dealing with horses than the traditional style. It is considered natural horsemanship. According to Parelli, “If all I did was teach you to think like a horse and truly understand their psychology, you’d have the keys to be able to do whatever you want with horses, and to win their hearts.” The Musikantows have been studying the Parelli method for some time now. Amy and Allen have achieved a Level 1 certificate and are working on Level 2. There are a total of 10 levels in the Parelli program, but anything after four is reserved for professionals.

Through the Parelli method, Allen and Amy have learned to emulate the signals horses use with each other in order to communicate with them. This puts the horses at ease and inspires confidence. Since they don’t behave like predators around the horses, the horses don’t have the desire to flee. They also don’t put shoes on their horses. The only horseshoes found in the stable are those used to adorn the walls.

Since horses are naturally claustrophobic, the stalls were designed in an open concept with Dutch doors. There is a space for each of their three horses, Flash, Rooster and Zebulon, along with extra stalls. Attached to the stable is a well-organized tack room which houses saddles and medical supplies among other things.

Beyond the tack room is the lounge where Amy and Allen spend time when they aren’t working with their horses. This particular space was intended as a gathering place to meet with friends and relax with a glass of wine. The room houses a custom table and chairs, made by local woodworker David Hatch, as well as an office area and a seating area. One side of the room has a window view into the stables with the rest of the windows facing out towards the drive and the pastures beyond.

Next to the stable is an 11,200 square foot indoor riding arena, which is the first such building in the area. Due to its size, the Musikantows had to obtain special permission from the Township of Liberty Grove for the project. The arena is covered with a patented durable fabric by the Cover-All Company and lends very well to the natural theme. “There are only four lights in this whole structure,” Allen explained. “Lots of natural light comes through as well as more fresh air.” Several other buildings on the property hold hay and equipment as well as Allen’s vintage car collection.

Across from the stable, is a playground for the horses – a horse obstacle course where the horses can work on their riding patterns and jumps. The Musikantows’ trainer, a Level 4 Pirelli student from Green Bay, works with them here once every couple of weeks to improve their skills. The degree of horsemanship that Amy and Allen have achieved takes much practice, reinforcement and time. In addition to their trainer, the Musikantows are assisted by a full-time manager who lives on site in a ranch home designed and built by Portside Builders. In time, they will host clinics as well as invite top riders to use the facilities.

The ranch has become a way of life for Allen and Amy. While their home is located off the property, they are at A & A almost daily, from early in the morning until evening. Apart from the time spent with the horses, they love to kick back on their front porch and enjoy the peaceful environment that they have created.