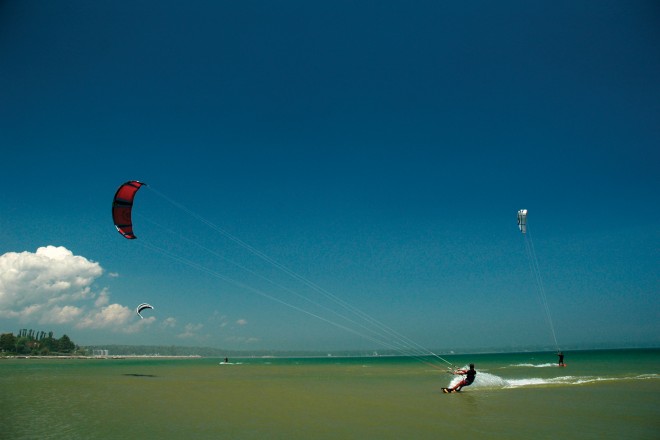 When people envision extreme sports, Door County usually is not the backdrop in their brain; however, there is a group of individuals who have rejuvenated the notion of what Door County could be. No longer just the picturesque surroundings for fine dining, art galleries, and antique shops, this crew has found a new vitality in the natural resources by hitting the water and tapping into the power of the wind. Kiteboarding – the next craze in water sports – has found a niche in Door County’s splendor.

The sport of kiteboarding, or kitesurfing, made its debut in Door County in the summer of 2000, a year after the sport’s first-ever World Championships were held in Maui. Steinerik Gabrielson, a windsurfing instructor and lifeguard known by many throughout the county simply as Stein, was covering the 1999 event for a windsurfing magazine. Pros at the event convinced Stein to take a chance and make the switch from windsurfing to kiteboarding, realizing the need for quality instructors to promote the potential of the sport, but also to heed its inherent risks. For perspective, a 12-meter kite (considered a mid-sized kite) has as much surface area as the sails on a 15-foot Precision sailboat, a boat with a 450-pound hull and the capacity to carry five passengers.

Even though the sport of kiteboarding could be considered in its stages of infancy, its history runs deep. The use of kites for transportation dates back all the way to the 13th century when both the Chinese and the Polynesians utilized kites to propel their canoes and barges throughout the Pacific Rim. Since those crude configurations, many have experimented with kites as a mode of transportation over land and water. George Pocock, a British inventor, used groupings of kites in the early 1800s to pull carts and boats, shattering all land and water speed records.

In 1977, Gijsbertus Adrianus Panhuise of the Netherlands patented a device which prefaced the notion of kiteboarding today. His idea was a water sport whereby a pilot stands on a floating board, similar to a surfboard, and is pulled by a wind-catching device of a parachute nature that is tied to his or her harness on a trapeze-type belt. Although Panhuise’s sytem never reached the commercial realm, people continued to experiment with the concept.

Kiteboarding emerged onto the worldwide scene in 1996 with the help of two professional windsurfers. Laird Hamilton and Manu Bertin showcased the sport to other ardent windsurfers, radical wake boarders, gnarly surfers, frenzied media, and awe-struck bystanders on Maui’s North Shore. Hamilton and Bertin’s display opened up the possibilities of what could be achieved with kites and cracked the pre-conceived ideas of their limitations. The two harnessed the abundant power of the wind and sparked the kiteboarding revolution.

After trying kiteboarding and developing an instant affinity Stein decided he would come back to Door County in the summer of 2000 to reach the sport to his friends. The perfect place to begin in Door County was Baileys Harbor; its shape provided a cocoon-like learning environment on days with a south wind. After launching from Anclam Beach, even if someone crashed their kite in the middle of the harbor and could not get it re-launched, they would eventually wash up somewhere along the beach of Baileys Harbor rather than floating all the way to Michigan.

Luke Peterson was the second person to take up the sport in Door County. From an outsiders perspective, it might seem that finding the time to fit kiteboarding in would be difficult – with a wife, two children and a successful tile art business, extra time is hard to come by. On the contrary, Luke says, “Kiteboarding reminded me of skateboarding as a kid.” It is the type of sport that completely captivates a lifestyle. Each weekend Luke and his family come up to Door County and spend their days on the beach.

After Stein and Luke, it did not take long for kiteboarding to engulf others in the county. Essentially five years after making its first appearance, there is a core group of around eight kiteboarders who consider Anclam their home beach. When the wind is blowing, one can almost see the anticipation in their eyes, a sparkling reflection of their eagerness to be out there ripping it up rather than at their respective jobs throughout the county.

The word spreads via one cell phone to another when the wind is coming out of the south. Soon, the whole gang has arrived at the parking lot, their vehicles decked out with gear, the beach dotted with kites, and the sand draped with lines. The mood is on the surface, almost as pure and simple as ‘the wind is blowing – today is a good day.’

They work together to safely launch each other’s kites, allowing and encouraging the physics of the bobbing and weaving, swooping and looping, dancing and dipping in figure eights to propel them across the water’s surface. The candy-colored kites aid the ability to effortlessly clear air space as large as the latest and greatest SUV. Their stunts and maneuvers seem to defy gravity as if they were meant to be floating in the clouds since birth.

Not long after the first kites peek above the treetops in Baileys Harbor, spectators start to arrive. They sit in their cars with binoculars perched upon their noses or walk the length of the jetty to get a little closer to the action. Onlookers cannot help but feel the passion and intensity that takes over; it is a sport that one truly has to respect whether a bystander or participant.

Kiteboarding is not for those who simply want to see if they like it. Even if one has the $1,500 to shell out for a beginner set-up including a kite, a board, a harness, lines and a bar, a lifejacket, and a helmet, the sport requires a certain mentality. Most kiteboarders would agree it takes at least a full season before anyone should go out on their own. Chris Miller, a 22-year-old kiteboarder was hooked on the sport in 2003 – a year he never even strapped a board to his feet and hit the water. He spent his time at the beach in July and August learning on a trainer kite, sometimes flying the kite for two or three hours a day, three to four days a week. “Now I can fly that kite without even looking, simply by feel.” Even after gaining the valuable time and testing their skills on the water, kiteboarders can still have accidents. Luke Peterson explains, “Everyone has their own little story [of a near disaster] … It’s entirely up to you when you’re out there.”

Where the future of kiteboarding lies is hard to tell – a sport still so fresh to the world scene and even greener in Door County. While the band of kiteboarders at Anclam Beach would love to see the peninsula become a destination in the Midwest for the radical sport, the prospect is also a reason for apprehension. The last situation any of them would want to happen would be for a flippant outsider to come in and blemish their standards of integrity and safety. The core group of kiteboarders truly appreciate Door County for the harmony of its wind and water and want nothing more than for others to appreciate them not just for their showmanship, but also for their ardor and virtue within this extreme sport.