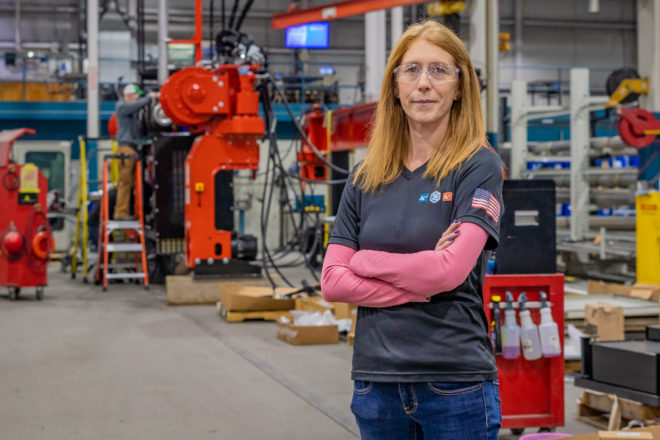 Jennifer Nixon started as a parts picker five years ago in the Marine Travelift warehouse in Sturgeon Bay and is now the warehouse manager. Photo by Rachel Lukas.

Manufacturing Month: Made in Door County

When Jennifer Nixon first set foot in Marine Travelift five years ago, she was intimidated by the vastness and orderly hustle of the assembly shop.

“Everything was so big, and everything moved so fast,” she said. “It was very overwhelming to see what we could actually do.”

Based in Sturgeon Bay, Marine Travelift makes marina boat-handling equipment, from mobile boat hoists to marine forklifts to hydraulic transporters. Nixon now serves as a warehouse manager there. It’s a role she attained last November after starting as a parts picker in the warehouse and then moving to receiving.

On a typical day, Nixon might set up her team for their daily tasks, load and unload trucks, clean and organize the assembly shop, and check in with other departments to ensure productivity. She’s no longer intimidated by the production process and now finds it satisfying.

“Now that I know more about the process of it all, it’s really neat to see it all come together,” Nixon said.

Though she is well aware that manufacturing is often thought of as a “man’s job,” she’s far from the only woman in her workplace. Instead, she reported a roughly even gender distribution at Travelift, from the factory floor to the managers’ offices.

Sharing this observation were other women leaders of Sturgeon Bay manufacturing businesses, such as Becky Ash of Hatco Corporation and Tina Rogers of N.E.W Industries.

“We’re pretty well split,” said Ash, an assistant team leader at Hatco. Although most workers on N.E.W.’s factory floor are men, Rogers, the vice president of finance and administration, said women fill many other positions.

Despite the number of women at these companies, manufacturing as a whole remains a male-dominated field. According to U.S. Census Bureau tables for 2021, women make up about 47% of the entire workforce, but only 30% of the manufacturing industry. And, only one in four manufacturing leaders is a woman.

Of the women who do work in manufacturing, many experience sexism, which comes in various forms, according to a study by the American Association of University Women. It may be glass ceilings, wage gaps or outright harassment, which 68.2% of women of color and 62.6% of white women have reported experiencing at work, according to the study.

Ash has worked in manufacturing the longest of the three women. She said a lot has changed during the past 25 years. When she has occasionally experienced sexism, it has taken the form of male workers not respecting her authority because she’s a woman.

“You get some gentlemen who come here to work who have the mentality at times that, ‘You’re a woman. I’m not gonna talk to you; I’m not gonna listen to you,’” Ash said.

But that’s changing. She said more and more employees are used to seeing a woman in charge. And N.E.W. Industries’ Rogers and her coworker, Christine Conlon, director of human resources, said they’ve never experienced any sexism during their manufacturing careers.

“I feel fully respected and fully acknowledged for the contributions I make,”  Rogers said. “I feel taken seriously.”

Despite the growing numbers of women in the manufacturing industry, Rogers said she believes it’s still viewed as primarily male-dominated – a perception she hoped wouldn’t scare away potential female workers.

And studies show it’s not. The U.S. Census reported that manufacturing jobs have included women at increasingly high rates since 2010, with the pandemic causing a dip in the overall rise.

When Nixon joined the manufacturing industry, she wasn’t sure it would be for her. Now she’s confident about sticking with it.

“I couldn’t see leaving this now,” she said.