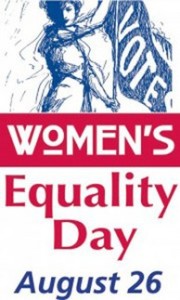 On Aug. 26, 1920 – after decades of work by suffragettes and others concerned with women’s rights – the 19th Amendment to the Constitution was passed, granting women the right to vote. Fifty-one years later, in 1971, at the urging of then-U.S. Representative Bella Abzug, Congress designated Aug. 26 as Women’s Equality Day to commemorate the passage of the 19th Amendment to the Constitution.

Yet, as the numbers below show, the gender gap continues.

The percent of Fortune 500 CEOs who are women.

The number of United Nations member states that have failed to ratify the Convention on the Elimination of Discrimination Against Women (CEDAW). While 186 member states have ratified CEDAW since it was adopted in 1979, the seven that have not are Iran, Palau, Somalia, South Sudan, Tonga and the United States.

The percent of executive officers in the U.S. who are women.

Percent of the 535 seats on Capitol Hill that are held by women.

The percent of the U.S. population that is female.

Where the United States ranks in wage equality among 142 countries.

The percent of minimum wage earners who are women.

The percent women earn compared to men – or 78 cents to every dollar earned by a man. For black women, that drops to 64 cents and for Latinas it is 56 cents.