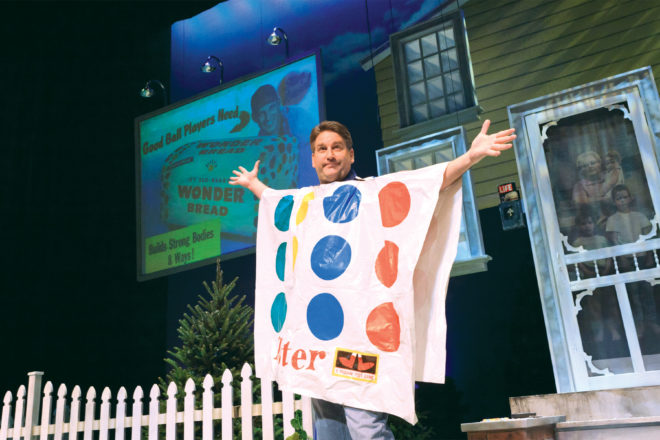 Pat Hazell brings his hilarious, one-man show on growing up as a baby boomer in the Midwest to Southern Door on Nov. 25. Photo by Andy Snow.

The Wonder Bread Years will live again at the Southern Door Community Auditorium on Saturday, Nov. 25, reminding people that there’s still a kid inside all of us.

The hilarious, one-man show was written by Pat Hazell, who has been a guest on the Tonight Show seven times, served as one of the original writers for Seinfeld, and is a contributing commentator to National Public Radio. He has also appeared on ABC, CBS, MTV, Comedy Central, PBS, Fox, CNN and Showtime.

Hazell created The Wonder Bread Years – his memories of growing up as a baby boomer in the Midwest – as a one-hour TV special for a pledge-drive campaign at the PBS station in Lincoln, Nebraska. It proved to be so popular that it spread to other PBS stations and eventually evolved into the live show that he has performed across the country for more than two decades.

Hazell’s Sweetwood Productions is based in Austin, Texas, where he has expanded his work to create, direct and produce live theater, including Bunk Bed Brothers, The Good Humor Men, Grounded for Life, Nashville Backstage, American Pie and Kodachrome Christmas.

“Stand-up comedy is often mistakenly looked at as a monologue,” Hazell said in an interview last week, “but it’s so much more than that when there’s a live audience. It’s like surfing a wave. As the audience reacts with laughter, the humor keeps building.” And laugh audiences do, as they remember their own experiences with hula hoop contests, Big Wheels, Eskimo Pies, Clackers, Toughskin jeans, Barbie dolls, sitting at the kids’ table at holiday dinners and riding way in the back of the family station wagon (without seatbelts, of course).

“When I was a boy,” Hazell said, “it was a tradition in our family to have a slideshow after Thanksgiving dinner, highlighting the things that had happened during the year. I incorporate many of those same slides in The Wonder Bread Years, sharing experiences that others in the baby-boomer generation can remember and relate to. It’s like a trip to the attic in the house they grew up in. And for their children and grandchildren it’s a humorous look at the world as it was when their parents and grandparents were kids.”

Jerry Seinfeld called Hazell “milk-snorting funny,” and Showtime said he is “one of the five funniest people in America.” The Los Angeles Times described The Wonder Bread Years as “pure-unpasteurized nostalgia.” Hazell said the show was written as a comic salute to the baby-boomer generation and our collective American consciousness.

“I think holidays are the best time to share nostalgia. There seems to have been a loss of ‘humanity’ in our everyday world. This show looks at how we lost it and how we can get it back.”

There will be a single performance of The Wonder Bread Years at the Southern Door Community Auditorium at 7 pm on Saturday, Nov. 25. The show is appropriate for all ages. Ticket prices are $15 for adults, $12 for seniors age 62 and older, and $10 for youth and children through high school age. To get the discounted prices, go to sdauditorium.org to select your seat and then choose Youth or Senior. For other reservations, go to the website or call 920.493.5979.