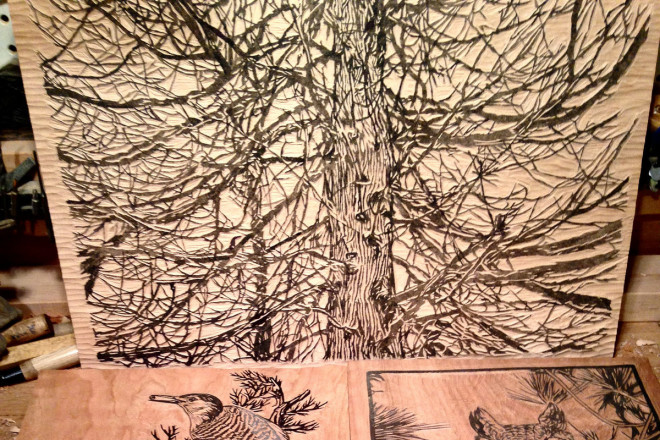 Alfred Stark’s work will be featured throughout March at The Ridges as part of their ongoing art and lecture series, Reflections on The Ridges. The artist will be in attendance during the opening reception on March 3, 4 – 6:30 pm, at the Cook-Fuller Center, 8166 Hwy 57 in Baileys Harbor.

Stark has a B.F.A. in drawing from Northern Illinois University and has been a woodblock printmaker for ten years. All his prints are created using the Japanese process known as Moku Hanga (wood print). Images are brushed on tissue thin Japanese paper (tengucho), which is then glued to a smooth wood block. Once the glue is dry the image is carved out through the paper on the block. The resulting image is then carefully inked with either a Japanese brush or brayer. Paper is then laid across the inked block and rubbed from the back with a tool called a disc baren. After rubbing, the paper is carefully pulled from the block and hung up to dry.

“Years ago my grandparents had a house in Door County near Kangaroo Lake,” said Stark. “Many years later I am still hooked on the place. Through my art, I hope to share some of the natural beauty that Door County and the surrounding lake area have to offer.”

Following the reception, guests are invited to say for a casual lecture at 7 pm. Brian Forest will present “Albert Fuller, Founding Father of The Ridges.”