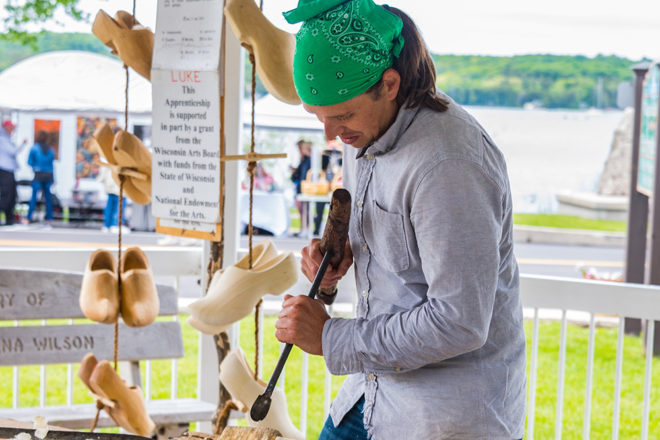 Walking through last year’s Fall Fest arts and crafts show, a booth near the end of the row caught my eye. Wooden ornaments were hung up and lying on tables surrounding the outsides of the tent, and there was a little commotion in the middle as a man was using tools – ones that looked old, worn and possibly inefficient – to create a pair of wooden shoes. In other hands, the tools would probably have been inefficient and clumsy, but this craftsperson’s hands wielded them with care and precision.

This artisan was Luke Traver of Oostburg, Wisconsin – the wooden-shoe carver of Luke’s Lost Arts – and he will be back at this year’s Fall Fest. On Oct. 18 and 19, 10 am – 5 pm, he will be at his booth demonstrating his craft.

Wooden shoes, despite not being an everyday form of footwear in the Netherlands or elsewhere, are symbolic of Dutch culture. The wooden shoe became a staple of Dutch workers during the 16th century. In the low-lying Netherlands, where the soil was often wet, these shoes kept the feet of farmers, fishers and other tradespeople warm and dry. The shoes were also adapted to the profession of the wearer, so, for example, the wooden shoes of fishers were shaped with an exaggerated point at the toe to help the wearers sort out the nets.

When leather became the more versatile shoe material, wooden shoes lost some of their popularity among workers, but they continue to serve as emblems of Dutch culture and an earlier era.

Today the shoes are mostly made by machines, but there are still a few (fewer than 50) craftspeople worldwide who make the shoes using handmade tools. Traver is one of them.

In the Netherlands, wooden-shoe makers passed down their craft through generations, with some families having done so for nearly 300 years. Traver learned the craft from master shoe carver Bob Siegel Jr. He started as Siegel’s helper in 2004, then progressed to assistant.

Siegel was trained by Dutch master shoe carvers in the province of Overijssel in northeastern Netherlands. In 2011, with help from a Wisconsin Arts Board grant and funds from the State of Wisconsin and the National Endowment for the Arts, Traver was able to complete a one-year apprenticeship under Siegel. Serving as his protégé, Traver has carried on Siegel’s dedication to preserving this ancient craft after Siegel  retired from carving in 2014.

Traver travels throughout the state to festivals and events. (Attendees at Ephraim’s annual Fyr Bal festival may remember him from his appearance earlier this year.) During the demonstrations, Traver uses only three hand tools and a wood vice to create the shoes using the centuries-old original techniques. He also discusses some of the history behind the wooden shoes and answers questions. At Fall Fest, the wooden shoes can be personalized through woodburning designs, names or dates onto them.

If you need a break from eating and drinking during Fall Fest activities on Friday and Saturday, stop by Luke’s Lost Arts to appreciate a craft the way it was done 400 years ago.

Find Luke’s Lost Arts at the Fall Fest arts and crafts show along west Mill Road (turning left as you come down the Sister Bay hill). For more information about Fall Fest, go to cometosisterbay.com.