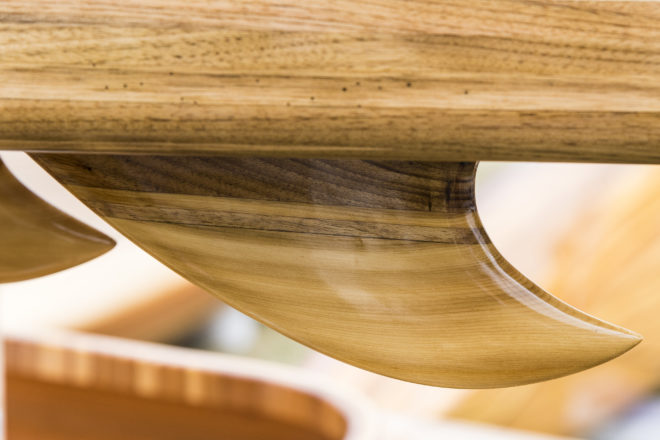 Shawn Peterson leads me past the yardbirds at his Egg Harbor farmstead, into the cool stanchion area of the century-old barn, and through the door into his workshop. It’s a long room, full of sawdust, books and a custom-made table he uses for building his handmade cedar strip boats. “This is where I live,” he said.

Two winters ago, Shawn began building boats during the slow season. He and his wife Karen own Maxwell’s House, a shop in Egg Harbor, and the winters are the time he can devote to his love of woodworking.

“Summers are packed with running the business, animal husbandry, and the garden. In the offseason, I need to find something to keep me busy, or Karen will find it for me,” he said, laughing.

He named his first completed boat, a canoe, for Karen in homage to her gentle push that got him started.

Shawn started woodworking as a young boy at his father’s side. Coming of age in Sturgeon Bay, he took shop class in high school and was surrounded by boatbuilding culture. 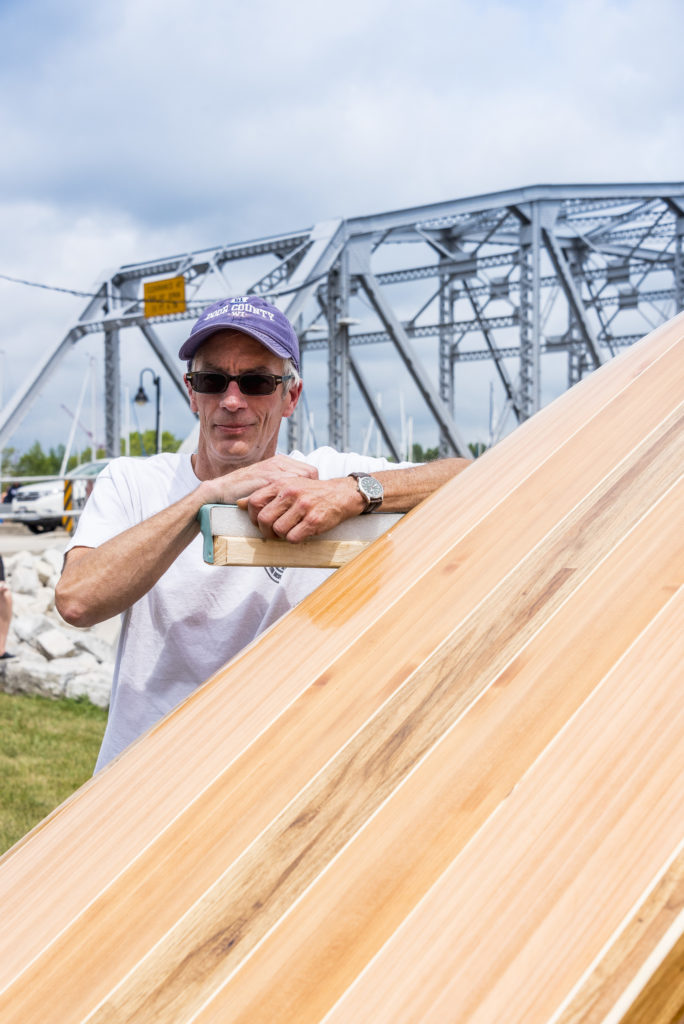 “We’d walk home from school and go past PJ’s,” he said. “We knew all the guys working there and saw the boats from start to finish.”

Like many of his generation, he learned to sail at the Sturgeon Bay Sail Training Foundation and spent time with family in the commercial fishing business.

Shawn and his dad built duck boats and skiffs together, and later he began building furniture. He studied design at the University of Wisconsin — Stout and after college worked at the Kohler Company doing industrial design.

“I had it all, the paycheck, the nice car. But I hated the corporate mentality, so I quit.” After some time in Arizona studying art, he found his way back to Door County and met Karen. “We grew up in school, church and college together,” he said. “But never gave each other any notice until we met later in life, back here.” 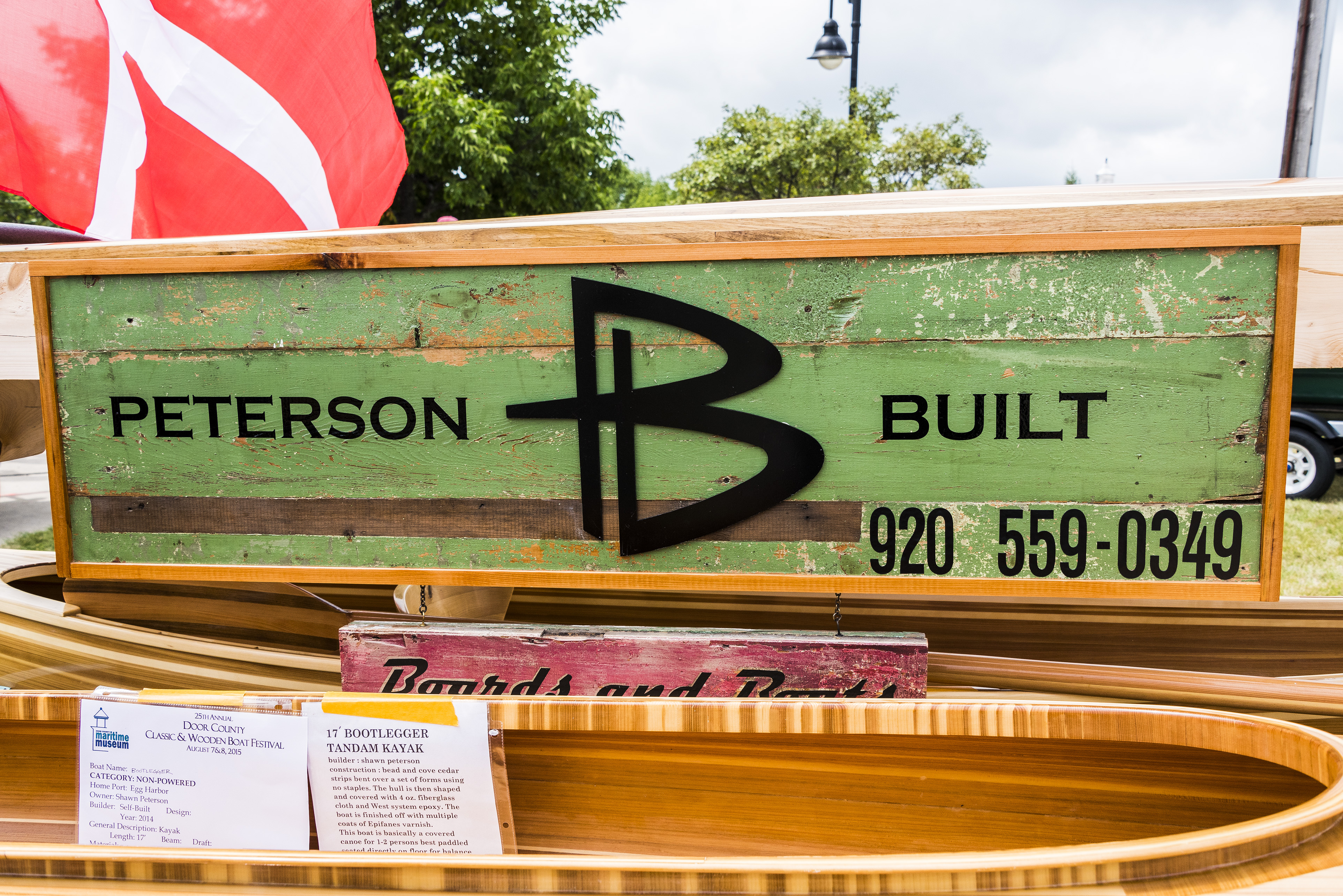 Shawn is slight of build, friendly and direct. You get the sense that when his hands are idle for a moment, he’s planning what to do next. When not woodworking, he is often picking up a paintbrush. Last winter he completed several large canvases, both abstract and figurative, many featuring birds. “I can read a book, and learn to do just about anything,” he said. That’s how he learned the craft of strip boat building.

The boats are stunning — they glow gold with strips of Western Cedar and locally sourced poplar and Butternut. He harvests the wood himself, and takes it to Henschel’s, a nearby mill, to have processed. “I’m a little bit of a wood monger,” he admitted. Constructed over forms, strip by strip, then covered with fiberglass and epoxy, his boats are extremely lightweight — the canoe weighs just 26 pounds. 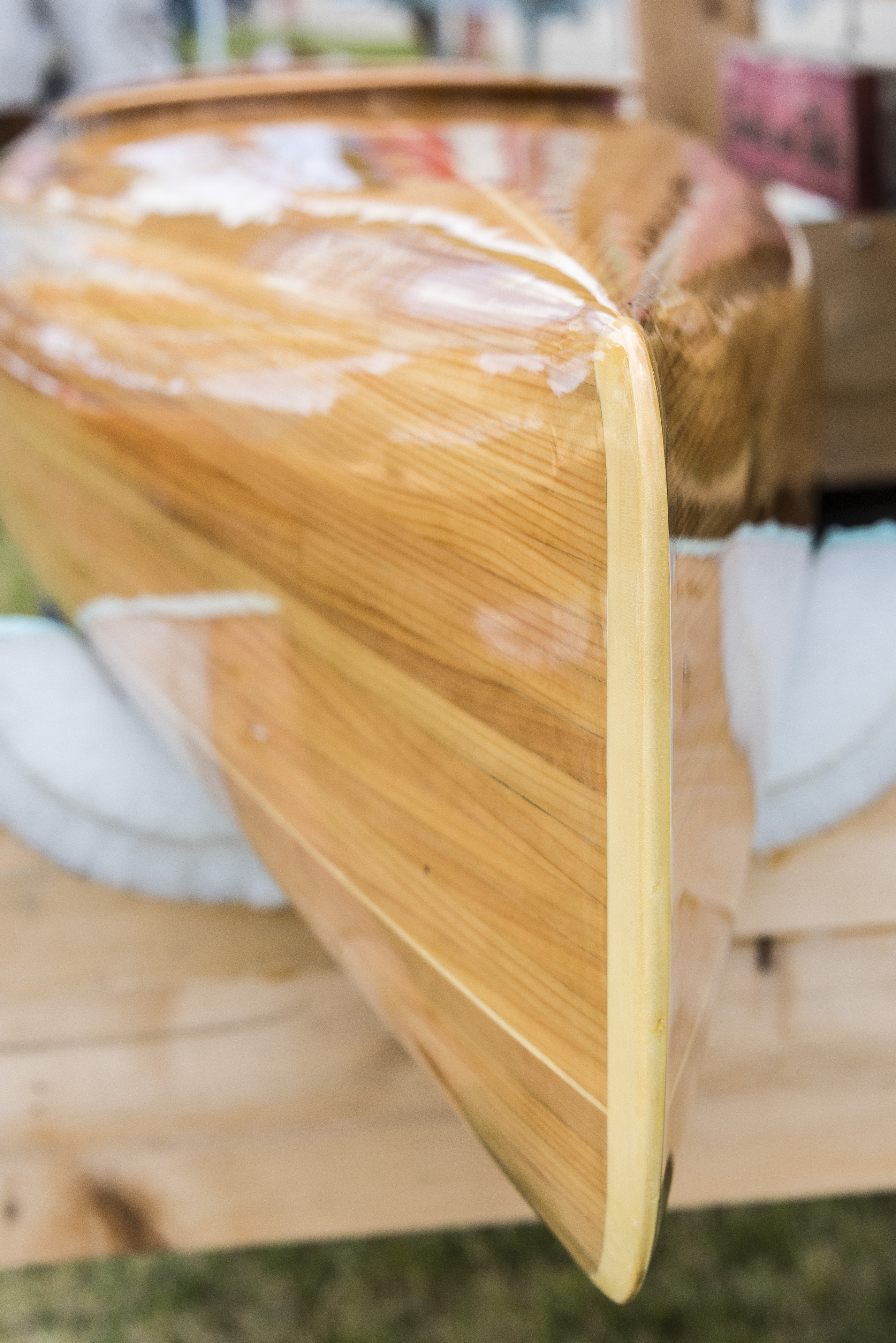 Every detail is carefully considered, from the ergonomic seat in the canoe to the simple alternating geometric patterns in the bow of the canoe to the hand-hewn paddles that accompany the boats.

Shawn admits his biggest challenge is his perfectionism. He is proud that, unlike many builders of strip canoes and kayaks, he uses no staples or “cheater strips” (small strips of wood used to fill in gaps in the curves of a vessel) during construction. He hand-cuts the strips and hand-planes the hulls, applying multiple coats of varnish that make his boats glossy and extremely durable.

Once Shawn got started down the boatbuilding road, he was hooked. He finished the canoe, then built a kayak and a stand up paddleboard. “Then I had some strips left over, so I made another canoe,” he said. 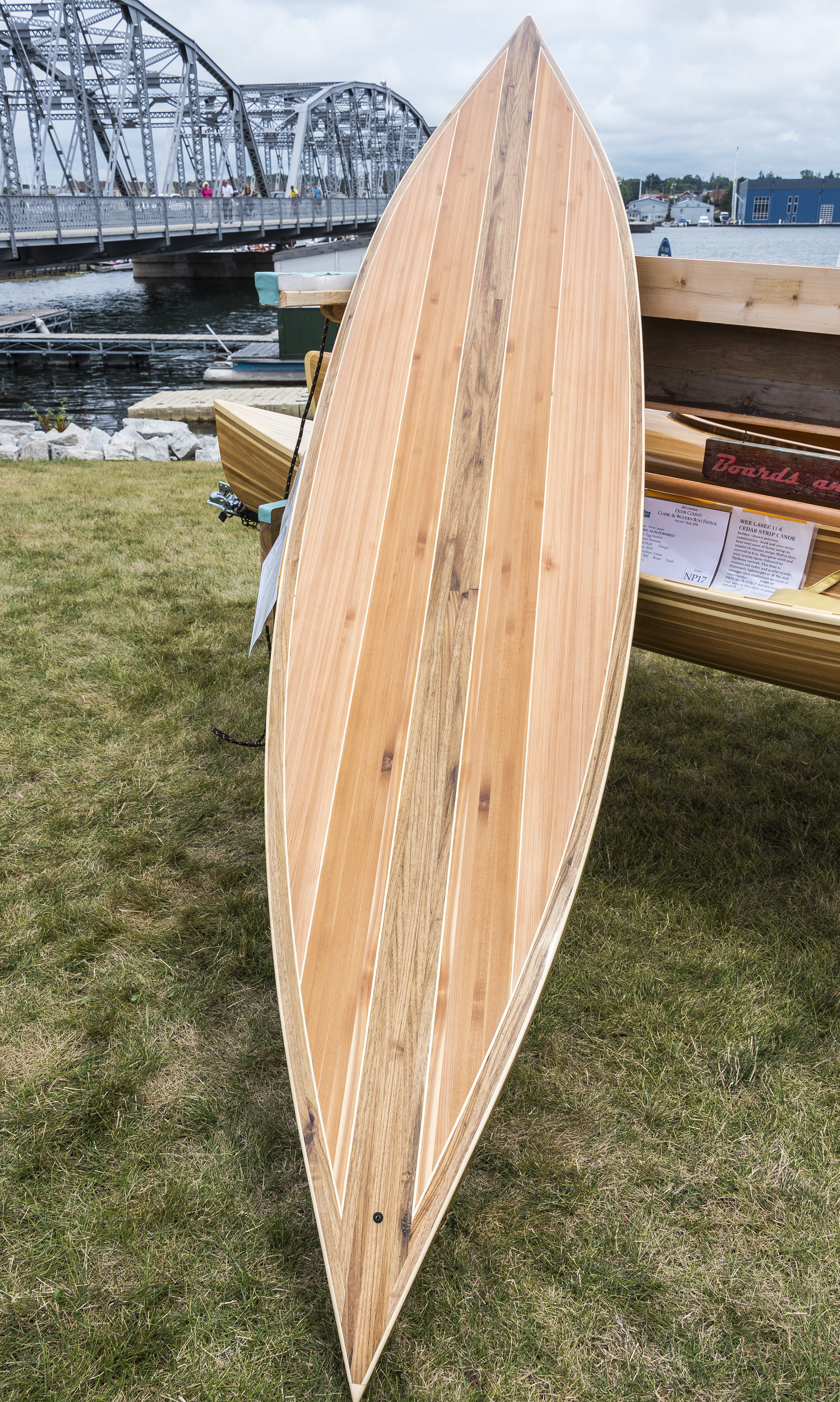 “I can’t really keep track of all the hours.” But for purposes of selling the boats, he estimates he has logged between 200 and 350 hours per vessel. He showed his boats at the Door County Maritime Museum’s Classic and Wooden Boat Festival last summer, and in the shop and on the lawn at Maxwell’s House. “They really look best in the water.”

Peterson would love to build another boat and has the plans all ready to go on top of a shelf in his woodshop.

“They’re up there in a box,” he said. “But I’ve got to sell one of these first. There’s a limit to how much money I can have tied up in these.” 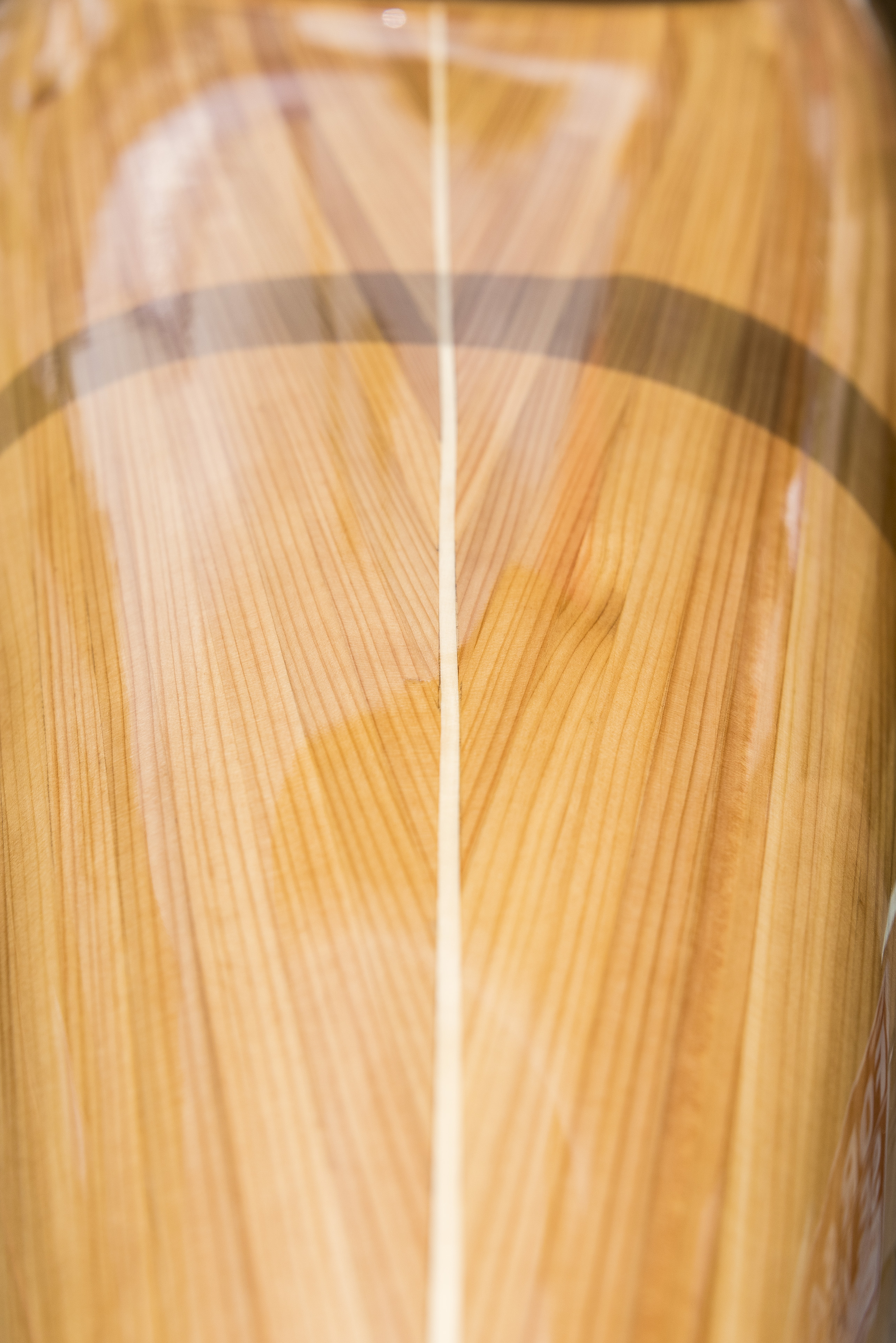 If he had to dream big on a future project? “I’d love to do a sailboat,” he said. For now, the boats are decorating his barn, but he’s looking for just the right place to show his work.

Shawn doesn’t take his boats on the water, as he prefers sturdier craft for duck and geese hunting. But as he looks at them and runs his hands over their sleek curves, it’s obvious he’s proud.

“I just appreciate beauty, that’s all.”