Each winter as we record weather data in our calendar book, I like to think back to one of my all-time favorite teachers, professor of physical geography at the University of Wisconsin – Oshkosh, Levelva Bradbury. She had a marvelous knack of leading her students into closer contact with the earth.

For example, one morning in spring she greeted the class with a fascinating observation: “How many farmers’ silos do you suppose I was able to count from one high vantage point in Winnebago County this past weekend?”

Another morning in late January she informed us that, “Well, this is the time we can expect the coldest stretch of the entire winter – around the 20th of January. Better get those longies out.” She had maintained accurate weather records for many years and delighted in sharing her most learned prognostications.

More than once in past years we thoroughly enjoyed 30 degree Fahrenheit weather on Jan. 20, a fact about which naturally I raved in some of my weekly columns. Invariably I paid dearly in later days for my gloating.

In recent weeks when it was genuinely frigid outdoors and the stinging wind swept over our place with profound authority, we marveled at how the woodpeckers gripped the trees tenaciously in the lee of the wind, and how all the birds would hunker down as they perched on the platform feeders. One decided benefit to those birds was that they were covering their bare legs with feathers, one of the finest natural insulating materials known.

Visual observation led us to believe that they were capable of doubling their apparent size when they wanted and needed to. What’s so amazing about many birds is that they can control most feathers on their bodies with the skin. These days the feathers are being forced outward considerably from their bodies for added insulation. 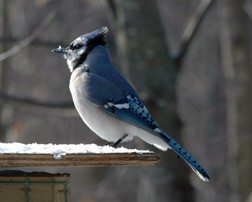 This Blue Jay has puffed out its feathers, trapping air, to keep warm in the frigid winter.

I treasure an experience a friend and I had while walking back from our mailbox one late November. Fortunately both of us had cameras with us so we were able to record the amazing scene. A Ruffed Grouse had flown up into a Quaking Aspen tree right next to our driveway and was busy feasting on the buds when we surprised it. Perhaps not wanting to leave its tasty meal, the grouse proceeded to pull its feathers as closely to its body as was possible, thereby making it blend quite nicely with the tree limbs and branches. For the minute or more that we took pictures that bird never budged, providing us with a very treasured experience.

It would seem quite logical that many wild birds living year around in northern latitudes would have more feathers on their bodies in winter than in summer. Actually, Professor Carl Welty, renowned biology professor for many years at Beloit College in Wisconsin said in his excellent book, The Life of Birds, that a Carolina Chickadee taken on Feb. 19 had 1,704 contour feathers while one taken on June 4 had only 1,140, a decrease of roughly 35 percent.

Undoubtedly birds have evolved over the years to be able to withstand harsh winter environments in more ways than simply growing more feathers. Banding, weighing and measuring nesting Chickadees from different latitudes has proven that individuals in the North tend to have larger bodies, giving them less body area in proportion to their weight. This fact helps them to survive the extremely cold temperatures more easily.

Another discovery is that the northern birds’ beaks, legs and wings tend to be shorter than those of their southern cousins. These extremities lose heat more rapidly than the larger parts of their bodies.

Ornithologists have also learned that a chickadee’s heartbeat speeds up as the surrounding air temperature decreases. An active feeding chickadee on a sub-zero day could be expected to have a heartbeat of more than 1,000 per minute, around 17 or more per second! Its heartbeat will slow down to about 500 beats per minute when the bird is asleep. These “non-stop little spitfires” also enter a state of torpor while asleep, thereby lowering their body temperature and conserving energy.

Eskimos, too, like the northern races and species of Chickadees, tend to have more body weight in proportion to surface area. These great people as a rule are shorter and heavier than people living to the south. And undoubtedly Eskimos through the centuries have become masters at making clothing helping them to endure what to us would be intolerably low temperatures. 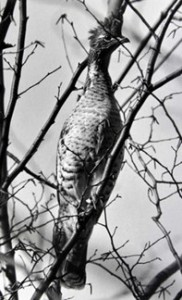 A Ruffed Grouse is playing “hard to see” by making itself as narrow as possible, blending in with tree branches.

Peter Steinhart said in his excellent story, “Winter on Our Minds,” appearing in the January 1986 copy of Audubon Magazine: “We are a tropical species, hairless (for the most part), thin-skinned, made of long limbs and sweat glands that are designed to cool us down rather than heat us up.”

Indeed the same holds true for the Eskimo who mastered the use of furs, but who today undoubtedly rely, as we do, largely upon the qualities of wool, down, Thinsulate or Holofil to keep them warm.

It was via the Hudson’s Bay Company years ago that good grades of woolen and fine-count cotton cloth were made available to the Eskimos. It was surely they who perfected the use of goose and especially eider down held between layers of fine-count breathable cotton for warding off icy January winds.

A knit woolen cap, which I have owned for 56 years, artfully made by the Cowichan Indians from Vancouver Island, British Columbia, has been a favorite of mine. Fortunately it wears like iron, is toasty warm and washes beautifully. Woolen hairs are hollow and hold air, perhaps the world’s greatest insulator.

I do hope a few of the facts contained in this story help bring added warmth to your bodies this winter!