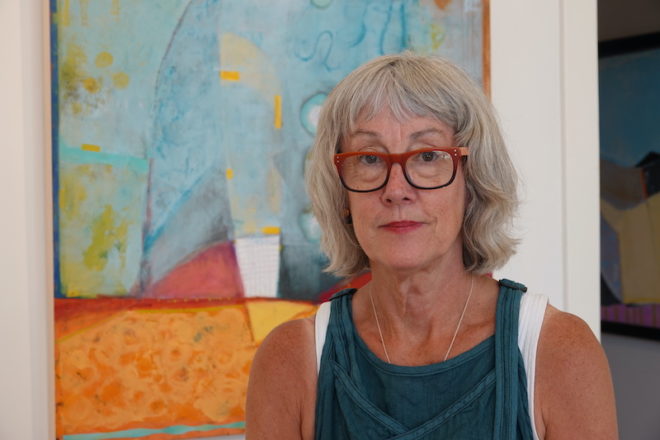 Karen Hertz-Sumnicht has spent her life working in art. With a bachelor of fine arts degree from St. Mary’s College in Indiana, she taught art to K-12 students for two years while starting a framing business in Appleton.

Now called Avenue Art & Co., the business provides custom framing, sells art supplies, and selects and installs art for corporations and organizations such as hospitals. She manages the company largely remotely and has reduced her role to about half time because she’s begun concentrating on her own painting.

Hertz-Sumnicht works largely in oil after taking an oil-painting course from Wendell Arneson at the Peninsula School of Art a decade ago. And although she’s taken cold-wax classes, too, she’s always come back to oil.

Her work with corporate clients may have given her a taste for working big. For corporations, the smallest pieces are two feet by two feet, and they can easily reach 36 inches by 48 inches and larger.

“They are good-size pieces,” Hertz-Sumnicht said. “They’re printing on everything from aluminum to acrylic to bamboo, and there are some other kinds of funky substrates that you can print on.”

Some of the corporate art is more akin to branding than fine art. She works with an artist in Minnesota who designs pieces that work with the corporate marketing messages, and Avenue Art handles some of the installation.

Seven years ago, Hertz-Sumnicht and her husband, Steve, bought a home in Sturgeon Bay, and now she’s part of Sturgeon Bay’s latest art spot, the SŌMI Gallery at 45 S. Third Ave. It’s a collaboration with Popelka Trenchard Glass, whose main production studio and gallery are a block away on 2nd Avenue.

She’s also received six commissions from the Trout Museum of Art’s Made to Order fundraiser.

“The museum shows your artwork through a page on their website,” Hertz-Sumnicht explained, “and a person can come, look at the website, check prices and request a piece [that’s] four feet by four feet.”

The museum gets 50% of the sale price, and the artist keeps the rest. One commission came from a couple who has already begun collecting her work, and they’re building a new home in Baileys Harbor. She’s visited the home to discuss concepts for a four-foot-by-four-foot painting with the buyers. Another request came from a fellow Hoosier, for whom Hertz-Sumnicht plans a painting of cornfields that will be four feet by 16 inches.

“A lot of my work is about edges and boundaries and borders,” she said. “One thing running into another thing.”

Like many artists, her style is evolving, and lately, she’s been working on simplifying.

“Not as many shapes, not quite as much texture,” Hertz-Sumnicht said. “Sometimes I struggle with that because then I don’t feel like it’s done.”

When it comes to working big, she slows down. A larger piece requires more time, conceptually, and she may spend days examining a work in process before deciding what needs to happen next.

“And that’s something both of the two artists I’ve mentored with have said: ‘Slow down,’” she said.

One big advantage of being at SŌMI is the presence of colleagues. Hertz-Sumnicht likes to get another set of eyes on her paintings, so she often shows her work to Stephanie Trenchard or Melissa Resch, who, she says, give good critiques. Or she’ll show a piece to her daughter, who has a degree in film from Bard, to hear her opinion.

Hertz-Sumnicht’s most unusual tool is something she’s borrowed from big corporations: Microsoft PowerPoint. Rather than using the sometimes-mocked presentation tool for its intended purpose, she uses it to chart the steps of a piece.

“I’ll photograph the painting and then email it to myself dropped into PowerPoint,” Hertz-Sumnicht said. “Then I have the progress of the painting all the way along, and I can watch it change. Every so often I’ll say, ‘I probably should have left it alone sooner than I did.’”