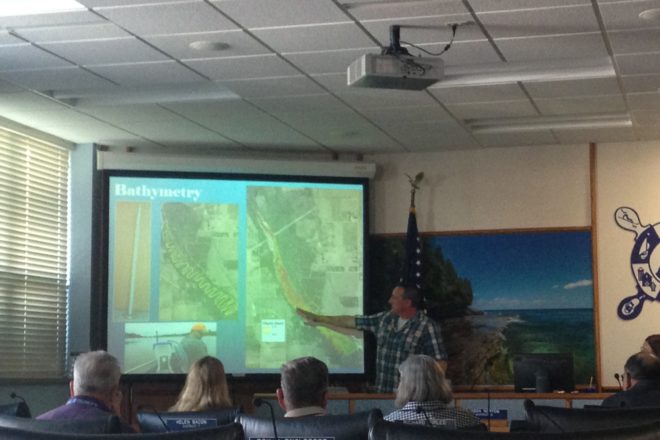 Door County Soil and Water Conservationist Brian Forest explains the bathymetric study of the Forestville Millpond’s bottom to members of the Land Conservation and Parks committees. Photo by Jim Lundstrom.

At a joint meeting of the county’s Land Conservation and Park committees on June 21, county board supervisors on those two committees heard from Soil and Water Conservationist Brian Forest on the recently released report on the Forestville Millpond.

The Pulse received a copy of the report before the joint meeting and reported on the various management options that are under consideration.

Forest reported to the committee that while the millpond is overloaded with phosphorus coming from surrounding croplands, the study found some hope, including that the millpond’s water temperature is pretty good for such a shallow system with an average depth of three feet. Forest also pointed out that 88 percent of the surrounding cropland is already operating under the county’s nutrient management planning system.

That means, he said, that going forward, the department will be looking for where the nutrient loading is coming from.

“We’re looking at ways we can improve or reduce what’s coming off the fields,” he said.

And while there was some gas, oil and a smattering of heavy metals (copper and mercury) found in core sediment, Forest said the results were actually pretty good.

“We don’t have to worry from the heavy metal standpoint. We’re not going to be treating it like nuclear waste,” he said.

Forest also mentioned that the county had sent out a survey to area residents, listing the various options for the future management of the millpond. He said respondents overwhelmingly rejected two of the options – to remove the dam that created the millpond and to do nothing at all.

“We propose that doing nothing is not a good management option,” said Soil and Water Department head Erin Hanson.

She suggested the committees accept the report, and move on to the next step, which is assembling a stakeholder group comprised of experts in various areas dealing with the millpond, residents and several county board members. That group would be charged with working out management options and coming up with a final plan by November.

Once that working group is assembled, they will meet in August, September and October, delivering a final report to the county board for November.