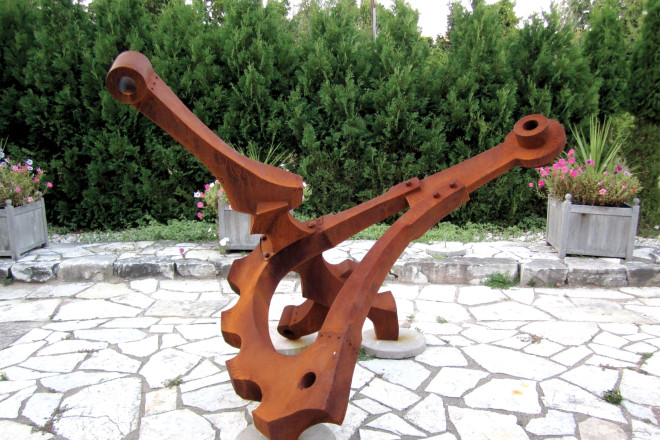 Nathan Hatch, a 2000 graduate of Gibraltar High School who is making his mark in the art world, credits Bob Merline as the teacher who first suggested he focus on sculpture. Merline remembers Hatch as a very diligent, hard-working young man who, when he first entered Merline’s art classes, had an absolute passion for painting.

“As we progressed,” Merline says, “I felt he had a much stronger ability to work in three dimensions and encouraged him to pursue that. 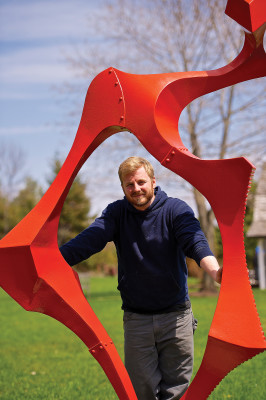 “He was a natural at understanding mass and form – how objects fit together in space,” Merline said. “And he had an uncanny ability to manipulate materials, whether clay, wood or metal. He adapted to it instantly. The truth about what he was destined to do was right in front of him, and he took off with it. He had great promise as a student, and I loved the direction he was going.”

But it was Merline who first sensed the teenager’s aptitude for sculpture, nurtured it at Gibraltar and suggested that he attend the University of Wisconsin – Milwaukee to study with Merline’s friend, Charles Kraus, who then headed the sculpture program in the Peck School of the Arts’ Visual Arts Department.

“Things really started to blossom there,” Hatch said. “I was able to work with bronze casting and other large-scale metal projects. When I began to think about graduate school, Kraus suggested the University of Kentucky – Lexington.” Another bit of good advice from a teacher/mentor.

Hatch spent three years in Lexington, including two years as an instructor of courses in Two Dimensional Surface Design and Three Dimensional Form. Throughout these years, he also exhibited his work in shows in Milwaukee, Sister Bay, Cincinnati and Cleveland, to name a few. Two of the exhibits in Ohio were national juried shows. During the summer of 2010, as artist in residence at Eastern Illinois University, he designed, fabricated and installed a large-scale steel sculpture.

In 2012, a year after completing his MFA degree, Hatch was the featured portfolio artist in a biannual juried publication, Encaustics Works 2011, by R&F Handmade Paints of Kingston, New York. (Encaustics, mixing heated beeswax with paint pigments, is a type of painting that Hatch has used with some of his sculpture pieces.) His work also appeared that same year in a juried national exhibit in Cincinnati and in other exhibits in Wausau and Milwaukee.

In 2013, Hatch achieved a goal coveted by sculptors worldwide when he was selected for a two-month residency, sponsored by the National Endowment for the Arts, at Sculpture Space in Utica, New York. 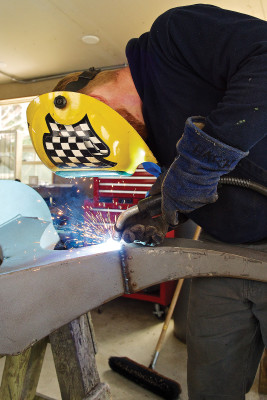 Sculpture Space began life as a boiler factory. During World War II it produced parts for the landing craft used in the Normandy Invasion. In later years, as the economy suffered a downturn, it was reborn as a residency program for sculptors. Selecting just 18 to 20 artists each year for two-month sessions, Sculpture Space has helped to advance the careers of more than 500 national and international sculptors since 1976.

Participants live and work together for eight weeks, sharing their ideas and learning from one another. “While I was at Sculpture Space, there were also sculptors from Berlin, Detroit, New York City and Vermont,” Hatch says. “It was great to work with such a range of different people in a setting devoted entirely to sculpture. We worked independently, but were together in the huge shop space. I produced a lot of work there.”

Many of Hatch’s sculptures suggest a component of a massive machine. Much of his work, in fact, including smaller pieces, resembles implements, although he likes each piece to be open to many interpretations.

“I’ve always been interested,” he says, “in the aesthetics of tools.”

Where does his inspiration come from? Hatch’s artist statement says, “My work derives from memory, passage of time and the mystery that can hide in the everyday. Reverence mixed with speculation and imagination is what I draw from when creating my work. Each sculpture is purposely ambiguous in order to strengthen the viewer’s attraction to what is not easily definable. I use the implication of functionality in order to prompt speculation on the part of the viewer. The references used range from mechanical to the biological and from contemporary 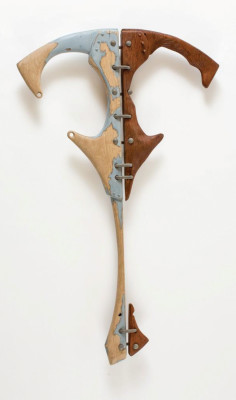 to ancient. A disconnect from a predicable timeline facilitates each object to be viewed with a new perspective.”

Hatch’s work was exhibited in Minneapolis in May, and it will be part of a group show, The Art of the Container, at the Peninsula School of Art in Fish Creek from October 24 to December 27. Meanwhile, his work can be seen at the Fine Line Designs Gallery in Ephraim, at the Elaine Erickson Gallery in Milwaukee and at the Shidoni Foundry and Galleries in Santa Fe, New Mexico. And he invites visitors to his workshop at the Fine Line Designs Gallery, where he works almost every day.

Now married to Jessica and with a daughter, Alayna, born in February of 2014, Hatch is comfortably settled in Door County. “I like being able to produce work here and sending it out into the world,” he said. “I look forward to doing more large-scale sculpture and working with architects, urban planners, developers and designers.”