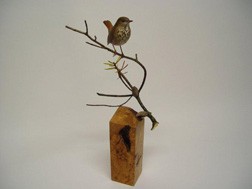 The Miller Art Museum welcomes Green Bay artist Gary J. Eigenberger as a speaker on June 13 at 10:30 am. The museum talk is free and open to the public, doors open at 10 am for coffee and treats.

The program is held in conjunction with the Wildlife Biennial Exhibit, now in its 16th year. The exhibit runs through July 23 and includes work by 35 Wisconsin artists in a variety of styles in painting, carving, and sculpture.

Eigenberger’s love for nature and the outdoors brought him to sculpting animals and birds in clay at a very young age. At 7 years old he had his first exhibit at his local public library, and began taking his carving seriously in 1987.

The Miller Art Museum, located at 107 S. 4th Avenue in Sturgeon Bay, is open 10 am – 8 pm Monday, 10 am – 5 pm Tuesday through Saturday, and closed Sunday. For more information visit millerartmuseum.org.