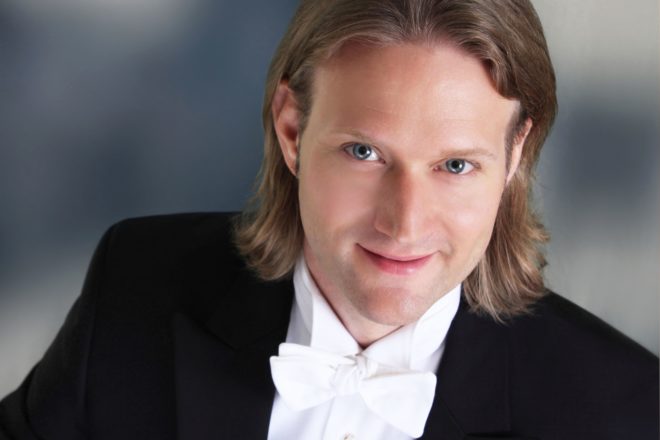 It’s likely that not too many people in Door County have heard a live performance by a world-class opera singer. That can change in a few days, when Keith Harris, a singer, voice teacher and voice-over artist, will be in residence at Sturgeon Bay High School. He’ll work with middle- and high-school choral musicians on May 21, conducting clinics during their choir classes.

Harris grew up in Janesville and Madison, where he graduated from high school. “It’s really because of the arts programs in the public schools that I’m a professional singer today,” he said, “and I like to give back when I can. It’s sad that the humanities are being cut in so many schools. I was an athlete in high school, too – football and track – but those aren’t things I can do the rest of my life. Music is something we can do until we die.”

Harris’s mother, Susan May, lives in Sturgeon Bay and suggested that he visit the local schools, which he was delighted to do. “It’s especially important to encourage middle school boys,” he said. “They may feel insecure as their voices change – a tenor today and a bass tomorrow – but if they’re encouraged to hang in there, they will continue singing the rest of their lives.”

Harris and Leslie Hill, Sturgeon Bay’s secondary choral instructor, have not met, but have been corresponding via email in preparation for the week’s activities. “It is very exciting,” Hill said, “to have a professional musician come to our schools. And, as he said, it’s especially wonderful for the younger boys. It’s also a reason for us to work hard to up our game and be the very best we can.”

Harris holds a bachelor’s degree from Lawrence University and a master’s from the University of Washington, both in voice performance. A seasoned concert artist, who made his debut in 2009 at Carnegie Hall, he performs with symphonies across the U.S. and with opera companies in this country and in Europe. As a voice-over artist, he has done thousands of commercials and other projects for hundreds of clients all around the world.

The May 22 concert is open to the public at no charge. If you miss this opportunity, your next chances to hear Harris are May 28 at Lincoln Center in New York City, June 11 at Carnegie Hall or twice this fall at the Israeli Opera in Tel Aviv.

Harris said the Lincoln Center concert at 7 pm, May 28 can be watched live on Facebook. Go to dciny.org/current-season/ then scroll down to May 28.