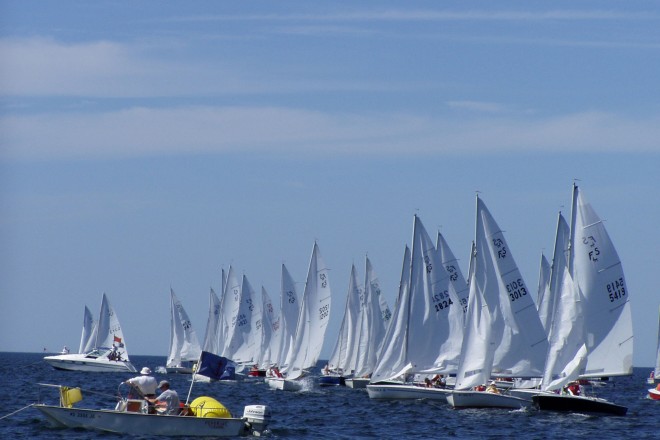 It isn’t a stretch to see why Door County is a huge attraction for sailors. Pristine waters and a constant supply of good winds keep salty dogs from all over the United States coming back year after year. One place these sailors gather is at the Ephraim Yacht Club (EYC) which is just coming off its 100-year anniversary celebration. This year the EYC is proudly hosting the 2009 Flying Scot North American Championship (NAC), a week-long racing event which is attracting Flying Scot sailors from every corner of the country to our shores.

For you landlubbers out there, the Flying Scot is a 19-foot day sailer – which is to say that there are no

sleeping berths on board and it has a deep, comfortable cockpit. It will hold up to eight people but for racing purposes will usually have a crew of two or three. It was designed in 1957 by Gordon K. Douglass and is in the “one design” class of boats. One design racing is a method where all boats have identical designs or models.

The EYC has had a Flying Scot fleet since 1964 and owns six “club boats” that are used for both adult and junior lessons. During the season there are Flying Scot races on Monday and Saturday evenings and, of course, no Door County summer is complete without the Ephraim Regatta, a series of Flying Scot races that will be held this year for the 104th consecutive time just one week before the NAC begins.

Jay Lott, a lifelong sailboat racer and vice chairperson of the EYC/NAC event, explained to me that part of EYC’s 100th year celebration in 2005 included hosting the Flying Scot Midwest District Championship as a part of the festivities. Harry Carpenter, owner of Flying Scot, Inc., the only producer of new Flying Scot boats, attended that event. After a successful regatta (it didn’t hurt that Harry Carpenter won), Carpenter suggested that the EYC make a bid to host the ’09 NAC. The bid went to the Flying Scot Sailing Association (FSSA) board of governors who eventually approved the venue. It is a lengthy process that involves a thorough examination of facilities for both boats and sailors. The process can take up to two years.

Barbara Griffin, president of the FSSA says, “We are very excited about coming to Ephraim and Door County. We have heard it is beautiful. We have raced the Great Lakes before but not recently. We look for fairly large bodies of water because many small lakes can’t qualify to accommodate our one-plus mile legs of the course.” Griffin goes on to mention, “We are looking forward to a small, charming town and desire only to have a positive impact on the area.”

The amount of work that goes into this event can’t be underestimated. There is a big difference between the more extravagant clubs with bigger facilities and paid staff and a not-for-profit, volunteer-based organization like the Ephraim Yacht Club. With a membership of around 375, it will definitely take a village to raise these sails! The NAC is a six-day event that is sanctioned by the FSSA with strict regulations and guidelines. Racing kicks off the afternoon of Sunday, August 2nd with a series of three races to determine the national junior and women’s champions. The women and juniors can then join the main race group as skippers or crew and, beginning Monday, there is a two-day round-robin to split the racers into two fleets. Those “challenger” and “championship” fleet races continue for an additional three days with trophies given out for daily winners.

Flying Scots are built identically and the FSSA has strict rules which prohibit changes that would make older Scots out of date, maintaining an even playing field. A Flying Scot carries a main sail, a jib and colorful spinnaker for downwind sailing; each sail is limited in its dimensions by class rules. An important aspect of Flying Scot racing is the official measuring of the vessels before any racing can 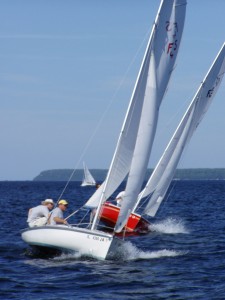 commence. All boats must be weighed and the hulls and sails measured; boat equipment and safety equipment must be checked and approved by certified officials. One reason that the guidelines are so strict is something that makes Flying Scot racing unique; ensuring that the boats are exactly the same makes certain that the race is reliant on the skills of skipper and crew and not on who can put the most money and equipment into their craft. It also ensures that owners of older Scots can still participate in races with no modifications needed to keep up with the newer fleets. Barbara Griffin proudly mentions that hull #1 is still racing today and is as competitive as the newest (at time of printing) boat, #5900!

The racecourse can vary in shape but is broken down into several legs, upwind and downwind. The races usually last for one to two hours with two to three races per day. The racing is managed by an experienced volunteer race committee certified by U.S. Sailing, the governing body of the sport in the United States. Volunteers will provide power boats to set and move racing buoys, establish start and finish lines, transport race committee and judges and perhaps rescue capsized boats (Flying Scots are relatively stable but can capsize when pushed to their limits in strong winds). Spectators by boat are encouraged and there will be more than a few amateur and professional photographers on the water as well. All races will take place in Eagle Harbor in Ephraim and will be easily seen from most of the Ephraim shoreline. Lott confides that some exceptional viewing spots would be at Anderson Dock on the north end of Ephraim, South Shore Pier across from Wilson’s Restaurant and also adds that perhaps the best spot, for an adventurous observer, would be atop Eagle Tower in Peninsula State Park. From there, Lott explains, you can have a true bird’s eye view. From a racer’s perspective, Lott describes it as “a game of chess on the water but with a board and pieces that constantly move.”

With an expected 60 to 80 boats entered in the championship, each with a crew of two or three, plus family members and volunteers, and a potential 200 to 300 extra tourists coming from Texas, the Midwest and all parts of New England, this is a very big event for both the county and Ephraim especially. Rachel Willems, executive director of the Ephraim Business Council (EBC) says, “We are excited that our village will play host to this nationally-recognized sailing competition. The Ephraim Yacht Club has done a thorough job of planning for the event and we are proud to have them representing Ephraim’s business community. The EBC welcomes sailing participants and their friends and family to Ephraim and we look forward to serving them.”

The Flying Scot community is a tight-knit one and with all of these like-minded sailors in town, you can rest assured that the social scene will be as exciting as the races. There are several get-togethers planned for the week that are being coordinated by ever more EYC volunteers. Carol Claypool, event chair and an accomplished Flying Scot sailor, has been tirelessly working toward coordinating all aspects of the week-long event. After the initial measuring of boats on Sunday, the women’s and junior’s championship will take place Monday morning followed that evening by a welcome cocktail party. During that event, sailors will be introduced to race officials and judges. The EYC’s annual “Brat Fest,” regularly held during the Ephraim Regatta, has been expanded to host all participants and EYC members. There are social events during the week being hosted in private homes and in local restaurants. The evening get-togethers are a great time for sailors to reunite with old friends and competitors who travel the racing circuit as well as time for trophy presentation for the day’s race winners.

Racing and trophies wrap up on Friday with a celebratory dinner and final trophy presentation. Whether you are an avid boater or favor terra firma, there is no doubt that this will be an exciting event to follow and watch. Having a national-level championship on our peninsula continues to showcase Door County as a world-class stage  for such events.