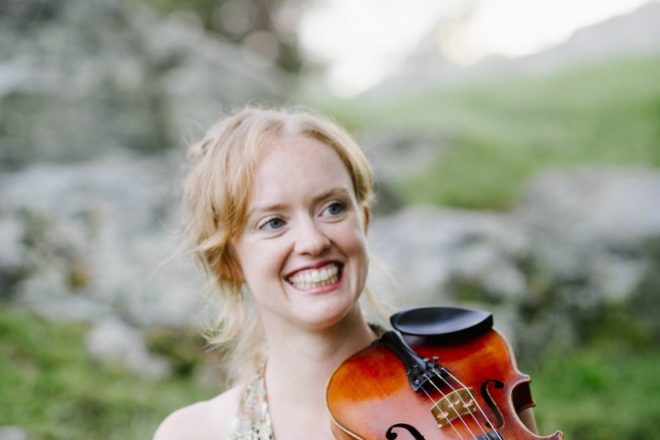 Celtic fiddler Hanneke Cassel somehow manages to balance teaching, composing and performing music all over the world, and she’s coming to Door County from Boston to perform for the 7th Annual Door County Nordic Fiddle Fest. The Peninsula Pulse talked with her about her many roles as a musician and what inspires her.

Cassel started playing classical violin as a young child, growing up in Port Orford, Oregon. She saw an ad on television for a fiddle contest around the same time her classical teacher moved away. She then met a fiddle player from her hometown who taught her a couple tunes, and she decided to attend the contest. She got hooked when she saw other people playing music like that, she said. She then made the switch from classical to fiddle.

Around 14 years old, she became interested in Scottish music. She went on to participate in and win the 1997 U.S. National Scottish Fiddle Championship. She was awarded time to study with Alasdair Fraser and began attending music camps.

Now, she’s teaching kids at those same camps all over the world. She’s already done five different camps just this summer. Because she attended them herself, it’s been easier for her to connect with the teenagers that currently attend, she said. It’s the inspiring community at those camps that are important.

“It’s those friendships in that community that often keeps the person going and inspires them to perform and write music,” Cassel said.

She’s headed to Germany next to teach at Haugaard’s International Fiddle School before heading to Door County. Soon after, she’ll go to California to teach at Valley of the Moon Scottish Fiddle School.

Cassel also teaches through an online program, which she finds has been a really great way to teach Scottish music to kids that might not have other access to it, she said. It’s a series that gets uploaded through YouTube, where she teaches a song with two versions, a basic and advanced version.

She performs all over the world too, so lots of her time is spent travelling. She does all sorts of performances, including solo, with a trio comprised of herself, her husband and acclaimed cellist Mike Block and an alternating guitarist and finally, the Hanneke Cassel and Mike Block duo.

Even amidst all of her different projects, Cassel’s somehow been able to find time to write original music. She has six full-length albums, her most recent being Trip to Walden Pond.

She’s often inspired by the traditional music she’s working on for a camp or for other projects, and finds herself building off of them to create something new. She also plays piano, and uses that as a tool to write music.

Cassel also finds herself inspired by people and events in her life, like people’s weddings or babies being born.

It’s interesting to translate some of those events and ideas without having lyrics. Your only tool is the instrumentals themselves, and Cassel feels that sometimes that’s even more powerful.

“I think instrumentals still transfer a lot feelings; in fact sometimes I think they can even make someone feel something in a way that lyrics can’t because they’re not too specific about something,” Cassel said. “It opens an opportunity for the listener.”

She’s currently writing music, but doesn’t have concrete plans for any new albums. Instead, she does a project every year in conjunction with Many Hopes, a nonprofit that houses, feeds and educates orphaned children in Kenya.

When people donate a large sum of money to the organization, she promises to write a tune for that person that they get to name. She’s currently been focusing her time on about 10 of those commissions.

In the end, amidst all her travel and teaching, she’s found that music is a way to communicate even when you don’t speak the same language.

The 7th Annual Door County Nordic Fiddle Fest presents acclaimed Celtic fiddler Hanneke Cassel and Norwegian multi-instrumentalist Vidar Skrede ion Aug. 10, 7 pm at Björklunden Lodge in Baileys Harbor. This year the festival concert highlights original music, as well as traditional music from Scotland, Cape Breton Island and Scandinavia, and explore the synergy between those cultures. Admission is $20 per person, limited to 120 seats. Tickets may be reserved in advance by calling the Baileys Harbor Visitor Center at 920.839.2366 during business hours, or may be purchased at the door, first-come first-serve cash only. A reception will follow the performance.