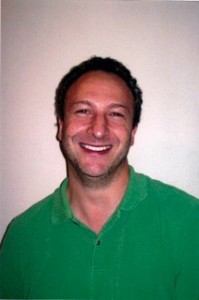 It’s good news for American Folklore Theatre and its fans that Colin Welford, the company’s music director, has not yet purchased a home in Door County. (Explanation to follow.)

Colin grew up in the northern English city of Manchester, the oldest of the four mixed-race children his parents adopted before having a biological child. By three, he was banging on the family’s piano in a way his mother found melodious, so she marched him down the road to Leona F. Walker, whose sign read Piano Forte and Violin Concert Lessons.

At 11, already the church organist, he played his first musical show, accompanying a tone-deaf woman who sang “Bye, Bye Blackbird.” “She changed key on every bar, and I was frantically trying to follow her,” he recalls. “Music was always there, always central in my life.”

He was fortunate that the Cheatham School of Music, one of the three most famous high school music programs in Europe, was in Manchester. Colin spent four years there, graduating at 18 and going off to Oxford, where he began as organist and conductor of one of the college choirs and went on to spend three years as president and one of the principal conductors of the Oxford Symphony, the university’s opera company. His first production with the 105-piece orchestra was Strauss’ Salome.

Colin completed a degree in musicology – “a dry, completely non-practical field,” he says – and enrolled in the World College of Music in London for graduate work in the field of classical conducting. At the end of his first year, he was recruited by a violin teacher who was taking his ten most promising students to study at the University of Miami and wanted to take an accompanist along. Colin got a full scholarship to the university (and a student visa) and ended up teaching a doctoral class.

When that job ended, he was hired as orchestra conductor at a performing arts school for high school and conservatory students that evolved into the New World School of the Arts. After several years in that position, he moved to the Hollywood Playhouse, a community theater in North Miami, where he was paid $14 a show to play keyboard in the five-piece band. (“There was a huge battle when I asked for a one-dollar raise,” Colin says, “but this job did get me a work permit. The theater ‘subcontracted me out’ to the Greater Miami Opera, so perhaps that helped pay for my raise.”

Fate stepped in one night when the playhouse’s regular clarinet player couldn’t appear, but sent a sub. A year later, in 1992, the sub, who turned out to be the major music contractor for all of Miami, called to ask if Colin would like to fill in for a month as associate conductor of The Will Rogers Follies, in which Keith Carradine was starring on Broadway. It was his introduction to the world of big-time musicals. In 1994-95, he was hired as associate conductor of the final nine months of the Follies’ national tour, visiting more than 40 states and ending in Las Vegas.

Back visiting friends in Miami for a day, Colin got a call inviting him to join an opera company touring in Italy. It was an exciting offer, with the catch that he and all his worldly goods had to be back in Vegas, ready to leave for Italy in three days. A 56-hour, non-stop drive, towing a U-Haul through a blizzard ensued.

His next job, back in the states, was touring with the musical, The Who’s Tommy, then to Frankfurt, Germany, with the show for almost a year and finally a revival in London’s West End. At this point, at age 28, Colin’s career took a leap forward when he was named full music director. “It was my first position of real responsibility,” he says. “A big, grownup job – getting to work on time, acting mature, being careful what I said.”

By the time that engagement ended, Colin realized he missed classical music. He saw a magazine ad advertising the position of music director for the English National Ballet, got the job and spent a year conducting a 100-piece orchestra in the 8,000-seat Royal Albert Hall. Ballet music is created to serve the ballet. It can be demoralizing for musicians, and it marked Colin’s final break with the classics. In 1997, he was back in the West End as conductor of the political thriller/musical, The Fix, based on the Kennedy family and directed by Sam Mendes, who two years later won an Academy Award for the movie, American Beauty.

After that run, Colin was called back to New York to prepare to take Lion King to Tokyo in 1999. Plans changed, however, and the show opened in London in 2000. Expecting to be there for some time, he bought a house. He’d hardly got settled when he was sent to open the show in the Plantages Theatre at the famous intersection of Hollywood and Vine, the musical’s second staging in the U.S.

After a year, the Disney Corporation put Colin in charge of all international productions of Lion King. He moved to New York and bought an apartment – where he spent exactly four weeks of the next two years. He traveled the world, casting various companies (the most exciting part of his job, he says), training them and sending them out to Germany, Trinidad, the Netherlands, Australia, London, Japan, Brazil, Switzerland and the U.S.

The second casting call in Trinidad was answered by a lovely young woman named Jennlee Shallow. “Usually, we had an actor with us to run lines with the people auditioning,” Colin says. “But that day, he wasn’t there and I read a romantic scene between Simba and Nala with her.”

Jennlee starred as Nala for three years in productions in Germany and Australia, and in 2007 she and Colin were married.

He spent seven years with Disney, then the couple moved to Chicago and bought an apartment.

Colin was music director for the four-year run of Wicked that broke every existing attendance record. At that point, he decided to take a year off and pursue a graduate degree in composing music for films. Then, in 2009, he received an email from his friend, Paul Libman, composer of the American Folklore Theater (AFT) shows Muskie Love, A Cabin with a View and Cheeseheads: The Musical. The email mentioned that a little theater in the woods in far northeastern Wisconsin needed a music director for the summer. Colin took the job and was charmed by the company, the setting and the audience – a feeling that was instantly mutual. Doc Heide observed that Colin encouraged performers to “tickle the ears of our patrons and warned us away from ‘lumpen’ phrasing.”

Part of the appeal of working with AFT is that it allows Colin time to continue his work with “big” musicals and to produce arrangements and orchestrations for AFT summer shows during the “off season.” A few years ago, he suggested that the company purchase a computerized keyboard and music software that could be used to recreate just about any instrument or sound in the known universe. It was, he said, “like having a paintbox with a thousand colors.”

In May 2011, the day before rehearsals began, the computer with Colin’s winter’s work was hooked to AFT’s printer. “We had high hopes,” he said, “that hundreds of beautiful sheets of music would soon come wafting forth. And they did – in what appeared to be Ancient Egyptian script.” Not to worry; theater thrives on drama. The computer and printer were coaxed into speaking a common language, and rehearsals began apace.

While Jennlee was appearing in Cirque Du Soleil in Las Vegas, the couple lived there. A year or so ago, they moved to Los Angeles, and Jennlee spent several months singing in a jazz cabaret in China. They recently moved to New York. Jennlee has been cast in a production of Dreamgirls at the Ivoryton Playhouse in Connecticut and Colin will take four weeks off from AFT to take Wicked to the Hobby Theatre in Houston. This winter, he’ll be the music director of the musical version of A Christmas Story at Madison Square Garden.

The little theater in the woods is a long way from the 8,000-seat Royal Albert Hall, but its pull on the heart is strong. “It takes so much more effort, with the space and the environment, to put on a show outdoors every night,” Colin says. He adds that some theater people who have spent all of their lives in cities are actually afraid of country life. Obviously, not a problem for Colin, who chats happily backstage amid the mosquitoes and the resident raccoon.

And, the good news: he hasn’t purchased property in Door County – a move that in the past has too often led to an imminent move far away. It looks as though he’ll be around.