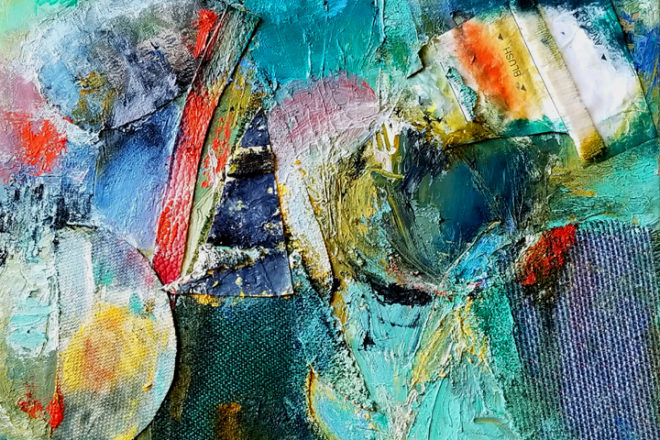 “Overt” by Melissa Resch.

Melissa Resch – a painter, sculptor and fabric artist – came to Door County in 2017 and has wasted no time in settling in as an artist.

At the end of a three-day scouting trip in December 2016, she was at a diner when Wence and Sandra Martinez of Martinez Studio invited her to join their table and asked what she was doing. She explained and asked them what they did.

“We’re artists, too,” they said, and invited her to get in touch when she moved to Door County.

Which she did the next month.

Resch has since been in three juried shows at the Miller Art Museum in Sturgeon Bay and earned its Bonnie Hartmann Award for Outstanding Creativity in 2017. She has exhibited in several invitational shows at the Hardy Gallery in Ephraim and she is represented by the Idea Gallery in West Jacksonport, which is strong in abstract art.

“Her worldly travels are reflected abstractly in her paintings, and she has developed masterly techniques. Her bold use of color and distinctive compositions are strikingly refreshing.”

Resch finds inspiration in the New York abstract expressionists and cubists – an inspiration that she displayed last year during her one-person show at Mr. Helsinki in Fish Creek. She explained the show’s title, The Abstracted Landscape, by saying, “This series of oil-on-canvas paintings is inspired by Door County’s geography and architecture. It explores spatial relationships by combining aerial perspectives with those of peering across the landscape.”

Not surprisingly, Resch always tries to get the window seat when she flies. And she has flown a lot. She has lived on five continents, visited all 50 states and lived in 12 of them, and for years, she called Cape Cod home. At least it was her postal address, even when she was studying in Australia or working in Brazil.

So when Resch decided Cape Cod had become too expensive, she decided to look at Door County.

“When I heard that Door County was called the Cape Cod of the Midwest, I just said, ‘Why didn’t anyone tell me this before?’”

For the last several months, Resch has been studio-sitting the Martinez Studio and gallery in Jacksonport, working in retail and on the census, doing projects and showing the Martinezes’ work by appointment. She has also been using Sandra’s hand-carved rubber stamps to create designs on fabric that can be turned into backpacks or masks. After a hectic summer, she looks forward to the quieter months of Door County.

“Winter is when I recharge the batteries,” Resch said. “Then at some point, the work gushes out, and I am super prolific. The fine art happens when I am well rested and totally in that zone so I can really access the energy for figuring out what is going on on the canvas, making enough sense so some magic can start happening.”

Resch has been creating sculptures from old furniture that she cut apart with a Sawzall – an entirely new direction for her.

Resch taught fourth grade before deciding she wanted to work and live as an artist. She quotes the advice of poet Mary Oliver: “Tell me, what is it you plan to do with your one wild and precious life?”

Not teaching elementary school, apparently. So 10 years after graduating from Taylor University in Indiana with a B.S. in education, Resch enrolled in the Massachusetts College of Art and Design to earn a B.F.A. in painting, then a master’s in contemporary art from the University of Tasmania.

In addition to building an impressive resume, moving around has deeply influenced the colors of her work.

“My palette has changed between the Northern Hemisphere and Southern Hemisphere,” Resch said. “I also spent time in Brazil, and it really ramped up the palette being there because it has such bold, vibrant colors, in both the local flora as well as the way they live. It’s just very bold and vibrant.”

Australia called for a much cooler palette, with trees that are a much bluer green than Door County green, Resch said.

Despite her ever-evolving palette, she said the objective for her work remains true: “to express something else about the essence of what I’m seeing, what I’m experiencing emotionally, intellectually and ideologically.”