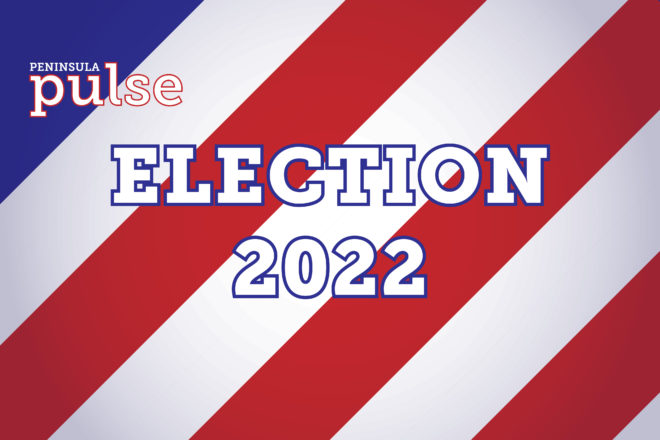 Voters will head to the polls Tuesday, Aug. 9, for the partisan primary.

Statewide, legislative and congressional seats are all on Door County ballots, as are two Door County offices for sheriff and clerk of circuit court. Both of the incumbents – Democratic Sheriff Tammy Sternard and Republican Clerk of Circuit Court Connie DeFere – are running uncontested.

To read answers to questionnaires previously published in the Peninsula Pulse for the primary race between Wisconsin Assembly incumbent Joel Kitchens and challenger Milt Swagel, go to doorcountypulse.com, and use the keywords “Primary Election 2022.” All polls in Door County open at 7 am and close at 8 pm on Election Day.

To find your polling place, go to elections.wi.gov/voters. Voters can register to vote online or by mail up to 20 days before an election. It’s too late to use that method for the Aug. 9 primary, but voters can still register in person at their municipal clerk’s office up until the Friday before the election (Aug. 5), or at the polls on Election Day, Aug. 9.

Absentee voting began July 26. Door County Clerk Jill Lau said she didn’t have a number for returned absentee ballots as of the Peninsula Pulse’s deadline for this issue, but approximately 1,775 were sent out to Door County voters.

If those who have voted absentee want to “spoil” their ballot – negate it to receive another – because they’ve changed their mind or the candidate they voted for has dropped out of the race, there’s still time, Lau said.

“If a voter would like to spoil their ballot, they would need to either make that request in writing to their municipal clerk, who can then mail them a second ballot, or they can appear in person during office hours or in-person voting hours and spoil their ballot to be issued a second ballot,” Lau said. “To note: If the voter has already returned their ballot, the clerk spoils the ballot – it is not given back to the voter – and issues another.”

The League of Women Voters of Door County (LWVDC) is collaborating with the Door County Transportation Department to help anyone in the county who needs transportation to register to vote, to vote early, to deliver their absentee ballot to their municipal clerk or to vote in person at their polling place.

Wheelchair transport and help with curbside voting are also available. Request and arrange a time for curbside voting through your municipal clerk. Once you arrive at your polling place, call the clerk, and he or she will assist you outside. Find municipal-clerk information at co.door.wi.gov/241/County-Municipalities.

Incumbent Joel Kitchens faces a primary challenge from Milt Swagel of Kewaunee. See where they stand on the issues here>>

A couple things happened before Julie Hancock decided to make a write-in run to get on the ballot for the congressional midterm elections in November.

First, the Democratic Party didn’t have a candidate on the ballot for the 8th Congressional District seat that represents all of northeastern Wisconsin, including Door County. Hancock couldn’t believe that, and it’s not a common occurrence. It’s the first time there has not been a Democrat on the ballot since Wisconsin changed from nine U.S. House seats to eight after the 2001 reapportionment.

Second, she said the country was a different place before the June 1 deadline.

“In June, the country changed drastically after the Supreme Court decisions affecting privacy rights, religious ‘freedoms,’ gun rights, among others,” she said. “The direness and outrage meter went from orange to red in a few short weeks.”

Hancock did some research and made some inquiries on social media to learn whether it was possible to get on the ballot for the November midterm election. If she receives 7,000 write-in votes in the Aug. 9 primary, she will be on the November ballot.

Once she decided to go for it, the 8th Congressional District organization of the Democratic Party found her.

“They’ve been very supportive,” said the Green Bay native. “I’ve been getting a lot of help from the party.”

Hancock is a lawyer in private practice, specializing in copyright, immigration and legal services for artists, musicians, creators and innovators. Constitutional law is one of her interests, and it could perhaps be traced to her “very distant cousin,” she said – the John Hancock, a signer of the Declaration of Independence.

Hancock described herself as “very much into politics and social issues,” though never formally as a candidate. At the same time, “none of my friends would be surprised” that she’s running, she said. “It’s one of those things everyone expected me to do one day.”

In the end, she said it’s important to her that all parties be represented and that incumbents have opponents.

“I don’t think anyone should feel entitled to their position,” she said.

Even if she doesn’t make it onto the November ballot, her political aspirations have been kick-started.

Gallagher does have a Republican challenger on the primary ballot, Shaun Clarmont, a master automotive technician and small family business owner in Ashwaubenon. Gallagher had raised $2.7 million to Clarmont’s $21,303 as of the latest filing period ending July 20.

All 435 U.S. House seats are up for election in November. As of July 31, Democrats held a 220-211 advantage in the U.S. House, with four vacant seats. Republicans need to gain a net of seven seats to win a majority in the chamber, according to Ballotpedia.

Democrat Steve Kagan held the 8th Congressional District seat in 2006 and again in 2008 before losing to Republican Reid Ribble. Ribble left office, and Gallagher replaced him, winning his first election in 2016.

U.S. Senate Race Decreased by Three, Gubernatorial Race by One

Door County voters will see eight Democrats on the ballot Aug. 9 for the U.S. Senator seat currently held by Republican Ron Johnson, who is also running for election.

But several of those Democrats have already dropped out of the race, including Outagamie County Executive Tom Nelson, who said his campaign was out of cash, and he couldn’t continue. (His campaign reported having raised $1.45 million, and having only $135,309 cash on hand as of July 20.)

All three candidates dropped out last week on Monday, Wednesday and Friday, respectively; all three endorsed Lt. Gov. Mandela Barnes, who has been reported as the favorite to win the race.