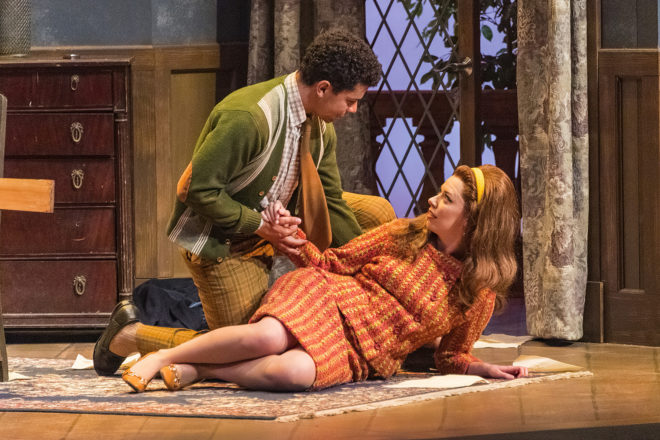 When the curtain opened on the Peninsula Players Theatre stage, it revealed a scene that seemed jarringly out of place for a modern theater nestled in a cedar forest on the water.

The scene was a Victorian-style English estate, filled with ornate wooden furniture and a crackling fireplace, its walls studded with old family portraits and ominous-looking weapons. The actors seemed out of place, too, wearing bright wool coats, pinstripe suits, sweater vests and kitten heels, all of which stood in stark contrast to audience members dressed mostly in shorts and T-shirts.

After a moment or two of surveying the stage, my eyes began to adjust, and the foreignness of the scene started to fade. I was no longer in the middle of a forest. Instead, I was in a 500-year-old English mansion, watching two authors as they crafted the perfect murder story – and then made their plot a reality.

Though the story was set about 4,000 miles away, the actors’ expressive delivery and on-stage chemistry brought the plot down to earth, right there in Fish Creek, Wisconsin. In many instances, the actors deftly expressed the nuances of their characters’ personalities, motivations and emotions with single lines or gestures – Charles rolling his eyes at his wife, or Dr. Woolley gleefully exclaiming that today might be the day when her ward finally dies.

Even if I hadn’t read the program before the play started, it would have been obvious that every actor has years of experience. Not only did they expertly trace the shifting tone of the story – which ranged from funny to sincere to painfully tense – but they made it look easy as they did so.

Immersed in what was happening onstage, I barely noticed the sun setting and the lights in the garden outside switching on. The cool breeze that filtered in through the open doors didn’t feel distracting – instead, it felt like an extension of the set: a draft whispering through the run-down mansion.

Even when bugs flitted periodically across the lighting setup, casting brief shadows across the actors’ faces, that felt fitting, too: Of course such a drafty, old mansion would have its share of moths. It was as though the venue and the production were working together to captivate the audience members and immerse them in the show.

Write Me a Murder will run through July 24. Watch it Friday and Saturday, 8 pm, and Sunday, 2 pm. Learn more and purchase tickets ($41-$47) at peninsulaplayers.com/shows/write-me-a-murder. Take bug spray.