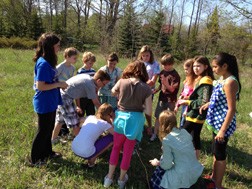 The Gibraltar Writing Club visits the new home of Write On, Door County!

Write On, Door County! is no longer just a dream. Conceived and spearheaded by Anne Emerson, former owner of Edgewood Orchard Galleries, and Vinni Chomeau, Friends of Gibraltar coordinator, the initiative to facilitate and promote the art of the written word throughout the peninsula now has a location to call its home – nearly 40 acres on Juddville Road complete with a four-bedroom house – and a director – Jerod Santek, longtime director of The Loft Literary Center in Minneapolis.

“Lots is happening at once,” said Emerson. “We’ve tried to keep balls in the air this summer, awaiting Jerod’s arrival. The webpage is up. Now we’re spreading the word. People may have heard of [Write On, Door County!], some have not. People wonder, ‘Is this for children? Is this for adults?’ We want them to know that it’s for everybody – all ages, all experience levels.”

The idea for Write On, Door County! came about just a couple years ago when Pastor Michael Brecke approached Emerson with an idea of his own.

“He thought kids should have someone praise something they have done, not everyone gets that,” explains Emerson. “He had this idea for a county-wide drawing thing – every gallery, every restaurant would feature a drawing by a young person with a positive statement from a professional artist beside the drawing. Usually my ideas are way too out of control, but even I thought that was out of control. Just seemed over the top. But then I remember thinking, ‘Gosh, maybe we should switch that thought to writing.’”

For the eclectic artistic community Door County fosters – writing is underrepresented. “Writing hasn’t had the same opening up as painting, theater, performance,” says Emerson, “but it’s going on and I think with a spotlight on writing there’s no end to what we could do.”

Chomeau was the first to put the idea of Write On, Door County! into action, says Emerson. Chomeau planned writing programs and events as a part of Write On, Gibraltar! during the 2011/2012 school year. She also coordinated writing mentors, a writing club, and writing-related field trips.

“For the last day of the Gibraltar Writing Club we took them on the Door County Trolley to the [Write On, Door County!] property. They had some ice cream and did some writing,” said Chomeau. “Kids were sitting under the trees and found their own spot to do their writing. It was neat.”

“Those ten-year-olds were our first official writers of Write On,” said Emerson.

Santek came aboard in a round about way. While visiting Door County he spoke with Kaaren Northrop of Main Street Market about a writing center in Door County. Coincidentally, Emerson spoke to Northrop about Write On, Door County! a couple weeks prior.

“She connected us,” says Emerson. After a few conversations, Santek invited Emerson and Chomeau to the Association of Writers and Writing Programs Conference in Chicago.

“11,600 people were there – he was the sole chair of this event,” explains Emerson. “He asked if we could meet for breakfast, then we knew this was serious.”

Santek moved to Door County just days ago and will work with members of the Write On, Door County! board – including Dee Paulsen, Cynthia Kraack, Bret Bicoy, Emerson, and Chomeau – on getting programs and events implemented.

“He envisions just what we envision,” says Emerson. “He wants to develop programs with schools, The Scandia, The Meadows. What he can bring to this is just phenomenal.”

Santek also brings a multitude of connections. “Somebody posted on a blog after his big farewell party at The Loft that they hate to lose him, but they know that he has this dream, that he will stay connected, and they are getting another writing partner in a beautiful place,” says Emerson.

“I have a couple of friends of friends in academia in Chicago and I tell them about this idea, they are just so excited to bring up groups of students for a writing program or activity,” adds Chomeau. “They really like Door County in the sense that it is so beautiful and inspiring and there’s lots of other things to do as part of the trip – paddleboarding, hiking, theater.”

Ultimately, Emerson and Chomeau look forward to promoting and encouraging writing in Door County. “We’re all storytellers – that’s how we let people know who we are,” says Emerson.

For more information about Write On, Door County! – including how to get involved, share your ideas, or donate – visit writeondoorcounty.org.