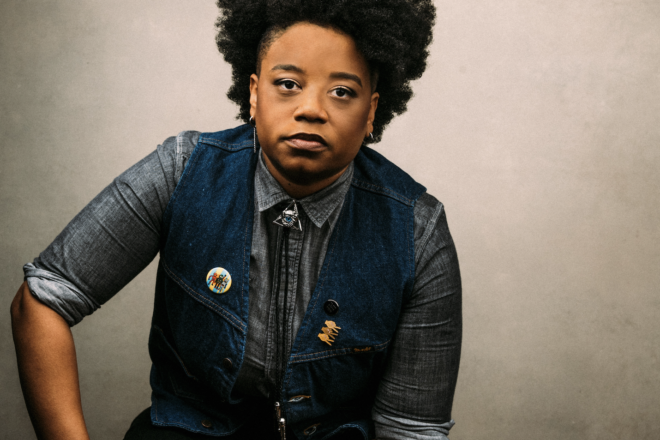 How Amythyst Kiah used songwriting to create music and healing

On Friday, May 13, Grammy-nominated songwriter Amythyst Kiah will perform in a solo concert at Door Community Auditorium, which is partnering with Write On, Door County and its Health & Healing Writer’s Conference, set for May 13-15.

Rolling Stone calls Kiah “one of Americana’s great up-and-coming secrets.” The Tennessee-based singer/songwriter describes her sound as Southern Gothic, and her 2021 album Wary & Strange showcased her unfettered and exquisitely controlled voice. Behind songs that elicit a rich, visceral response with every listen, there’s a creative process filled with deep soul-searching and intense healing.

“A lot of the songs written for Wary & Strange came from deep emotional turmoil,” Kiah said of her third album, which explores themes related to being a Southern Black LGBTQ+ woman, social issues and intensely personal reflections.

The emotional turmoil she speaks of is perhaps most vividly illustrated in the song “Wild Turkey”: a heartbreakingly honest account of her mother’s death and its aftermath.

“That song was really the catalyst for me to break free from my repressed grief and embrace life in a more open way,” Kiah said. “Up until that point, playing shows and being in school and studying music, I was able to accomplish quite a bit. But I was getting stagnant, and I had to figure out why.”
Through songwriting – and therapy – Kiah worked though the paralyzing grip the situation still had on her.

“‘Wild Turkey’ was the song that made me say, ‘OK, I’m going to address how I felt during the time of my mom’s death and put that into a song,’” she said, “because that’s always been how I’ve dealt with things – by putting it in a song or listening to music.”

It’s a heavy song about a dark topic – something Kiah does not shy away from admitting.

“But it’s the most meaningful song that’s helped me get to where I am now,” she said.

Although creating that song was cathartic in many respects, Kiah now looks forward to a new challenge: creating music of equal depth and resonance from a place where life is looking pretty good.

“Now that I’m in this different headspace, I feel I can approach songwriting from a place of being able to explore an idea and fully enjoy the process instead of feeling like, ‘Oh, my gosh. I’m in so much pain, and I need to get this all out,’” she said. “It’s a transition that I’m happily welcoming and is really challenging me to try a whole new thing with songwriting.”
Kiah’s fellow songwriter Allison Russell was slated to perform in Friday’s concert as well, but Russell recently pulled out because of her participation in the Juno Awards. Kiah said the evening’s set list will mostly feature songs from her latest release, with a few surprises added in.

“A lot of the songs that I’m going to be playing will be from Wary & Strange,” she said. “It’ll be me and an acoustic and an electric guitar going through some of the songs – and a couple of the songs from a new EP that will be coming out.”

For those going to the show, the opportunity to hear songs from the album in a stripped-down version creates a personal, intimate experience. And for the artist, it’s a chance to test and further hone her craft.

“When I’m listening to a song when it’s been stripped down, it’s a chance to see – as an artist – if the song can stand on its own,” Kiah said.

She admits that can be a little scary, but it also creates a challenge she gladly accepts.
“Taking a song and stripping it down to the bare bones of the song, it is something I think about when I sit down to write,” she said. “I’m writing the song, but I’m also thinking what can I do to create a soundscape with my voice and my guitar – and nothing else – that’s compelling.”

Following the theme of using music to promote healing, the concert will double as a fundraiser for Ukrainian war-relief efforts. All ticket sales beyond the artist’s fee will be donated to Razom, a GuideStar Gold–rated nonprofit organization that’s providing critical humanitarian war relief and recovery.