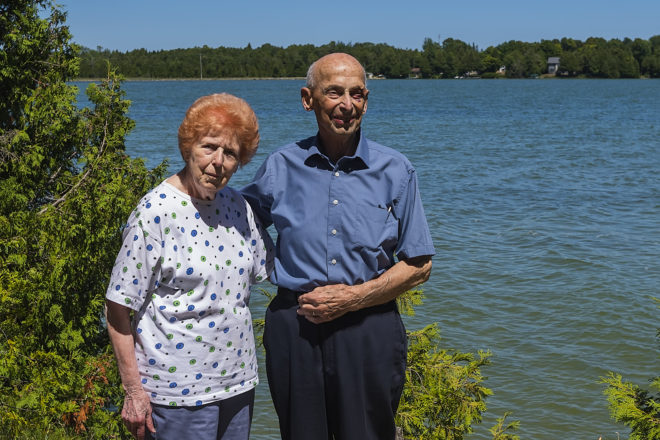 Paul and Marilyn Mahlberg at their home on Kangaroo Lake in Baileys Harbor, Door County, Wisconsin. Photo by Len Villano.

If it were possible to write on water, the names of Paul and Marilyn Mahlberg would be etched indelibly on Kangaroo Lake.

Their connection to the area goes back to the 1800s, when Paul’s great-grandfather worked in the timbering trade around the lake. His grandson, Paul Mahlberg, Sr., and his wife, Antoinette, settled on the north side of Milwaukee and became close friends with Robert and Pauline Schoof. Inspired by the old lumberman’s stories, the two young families began to camp by the lake in the 1920s, and by 1928 both the Mahlbergs and the Schoofs had cabins on the southeastern shore. The younger generation – Paul, Jr. and the Schoof boys, Robert and Walter – forged lifelong friendships there.

From the time he was old enough to walk, Paul, his older sister, Evelyn, and their mother spent every summer at the cabin, joined on weekends by Paul, Sr. During the week, there was no car and no telephone, but a postcard to Olson’s or Voek’s grocery in “the Harbor” would prompt a delivery the next day. If Paul injured himself, his mother loaded him in their boat and rowed up the lake to Eggers Point at the west end of what was then known as “the Kangaroo Bridge,” where doctors Gus and Florence Eggers from St. Louis had built a summer home in 1924.

From the beginning, Kangaroo Lake was the place where Paul was happiest. “It was wonderful for a little kid,” he said. “There was a lot of open land, not nearly as built up as it is now. I loved running around in the woods, swimming and fishing – oh, we got stringers of fish – big fish, little fish, bass, northerns, walleye, panfish!

“By the time I was in high school,” Paul continued, “my parents trusted me to spend time alone at the lake.”

“Yes,” interjected Marilyn, “but there was a condition: You had to have passed eighth grade!” Not likely to have been difficult for someone who studied German, French, Russian and Latin, earned three degrees and retired after 35 years as a professor at Indiana University.

Except it was difficult. Reading was a real challenge. His second-grade classmates made fun of Paul, and the teacher threatened to move him back to first grade if he didn’t try harder. It wasn’t until he was in his 40s and their older daughter was diagnosed with dyslexia, a genetic trait, that Paul realized he had the same problem. Although “word blindness,” as dyslexia was originally called, was first identified in Germany in 1881, at the time of Melinda’s diagnosis, only two scientific papers on the condition were available in the United States.

By January 1954, Paul had completed a bachelor’s degree in biology and a master’s in botany at UW-Madison and was working as a salesman for a chemical company when he decided to stop by an open house the Hoofers Club was holding at the university. Marilyn Waite, a sophomore majoring in art, had volunteered to show neophytes the proper way to paddle a canoe. Because she thought Paul was cute, she took a really long time with the demonstration. (And found out later that he had been president of the Canoe Club when he was in school!) He invited her to a dance at the university on Valentine’s Day, but after escorting her inside, found that the car he’d double-parked wouldn’t start. “We didn’t have even one dance,” Marilyn recalled. “He spent all evening trying to get that car out of the middle of the road!”

Things worked out, though. They were married five months later and spent their honeymoon camping their way across the country to UC-Berkeley, where they lived for four years. Marilyn became a licensed insurance agent and worked while Paul completed a PhD in botany. Next came several years teaching and researching plant cell biology at the University of Pittsburgh, where their daughters were born, and finally 35 years at Indiana University.

Eager to complete the degree she’d cut short at UW-Madison, Marilyn – in her 50s – enrolled at Indiana University and found herself in a computer class with her younger daughter, Heidi, who was not a happy camper. “I told her I wouldn’t sit with her,” said Marilyn. “That I’d sit with the cute boys in the front row.” She finished her degree in fine art and later worked for a stock brokerage firm, in which she is still a limited partner.

Through their marriage of 64 years, the Mahlbergs have returned to Kangaroo Lake as often as possible, staying at his father’s cabin or the stone cottage on the west side of the lake built by Paul’s uncle, Ernst Mahlberg. When Ernst died in 1985, Paul and Marilyn inherited his home. They spent many summers updating it, finishing the boathouse and, later, converting the large garage on property across the road into an art studio for Marilyn and a guest apartment.

When Paul retired, Kangaroo Lake became their permanent home. They were saddened to find that the lake’s condition was not as they remembered it from earlier years. In 1928, an association of lake residents had been formed, but in those days no one was particularly concerned about conservation. The Kangaroo Lake Association (KLA) languished for many years, but was reactivated in the 1960s. After several years of activity, the KLA was again dissolved in the late 1980s.

Mainly through the efforts of Paul and Marilyn, the organization was restarted in 1992. “Naomi Just, the treasurer of the former group, still had $20 left from their treasury,” said Marilyn. “She gave it to us to go toward the $50 it cost to get from the courthouse the names of all the families living around the lake. We contacted all of them and had a meeting to elect a board, write bylaws and collect dues.” Marilyn only recently gave up a 20-year stretch as secretary, and both have long served as the organization’s representatives to the annual conference of the Wisconsin Association of Lakes.

With grants from the DNR, a study of the lake confirmed that 30 to 40 percent of the bulrushes that had provided a natural habitat for fish had been lost. To Paul, whose interest in preserving the lake had been set in grade school, this was both a tragedy and a challenge.

In UW-Extension classes, Paul met Albert Fuller, for whom The Ridges’ new building is named, and through him, became acquainted with Emma Toft, whose impact on conservation is legendary. By 2004, Paul’s interest in restoring and conserving Kangaroo Lake was a passion. A massive project to try to restore the bulrushes was only moderately successful. The Mahlbergs also spearheaded an effort to stop the spread of the Eurasian Water Milfoil (EWM) that was choking out native plants in the lake. The Department of Natural Resources (DNR) provided grants for a study of EWM that established a grid of 450 GPS sites in the lake. Paul, Marilyn and Bob Schoof spent weeks checking and reporting on all 450 locations in 2004, 2006 and 2008.

The Mahlbergs were behind the effort to establish voluntary slow/no-wake zones in the south end of the lake, that has an average depth of just six feet, but their biggest challenge was protecting the section of the lake north of the causeway. By the early 1990s, there were rumors that someone was interested in buying land on the west side of that area to build condos. That part of Kangaroo Lake is even more shallow than the south end. Bulrushes and water lilies flourish, and there are other plants and wildlife not found elsewhere on the lake.

Every lake in Wisconsin has a “guiding member” in the DNR. At that time, Scott Szymanski from Green Bay represented Kangaroo Lake. Paul and Marilyn took him to the north end and said, “We’ve got to save this, and we need help.” Mike Grimm of the Nature Conservancy took a special interest in Kangaroo Lake and the necessity of getting motorized watercraft off the north end.

“We had to prepare a massive report for the DNR,” Paul said, “outlining the important plants and emphasizing that the north end, fed by Peil Creek and its watershed, is the main source of water for the larger southern end of the lake.

“There were many, many meetings with the DNR, meetings with Baileys Harbor and Jacksonport, which share the lake, and meetings with owners of land around the north end to convince them that protection of the lake would be a good thing for everyone.”

“There were people strongly talking against us,” Marilyn said. “They wanted no control of either end of the lake. We’ve spent a lot of our lives supporting unpopular causes. But we were ultimately successful. The north end of the lake is now protected by state law.

A “hard copy” of the Mahlbergs’ devotion to Kangaroo Lake and Door County is the 2000 field guide, Wildflowers of Door County, for which Paul wrote about and Marilyn painted pictures of 400 species. All profits have gone to the Land Trust.

Through the years, Paul has received many honors for his conservation work from the DNR and other organizations. Last summer, Paul and Marilyn were named emeritus members of the Kangaroo Lake Association Board, and they were honored at the KLA annual picnic in July. This fall, they’re returning to assisted living in Bloomington, Indiana – a link to the university community they were a part of for so long.