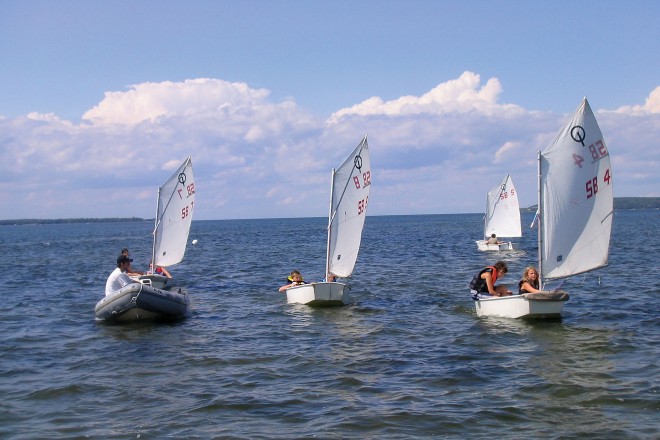 Door County’s access to Lake Michigan and the Green Bay waters has afforded the peninsula a rich maritime heritage. A piece of that heritage continues to thrive off the shores of Sturgeon Bay thanks to the Sturgeon Bay Sail Training Foundation. Each summer this organization trains young and old alike to learn and perfect the art and science of sailing.

Started by a loose knit group of volunteer yachtsmen, members of the Sturgeon Bay Yacht Club began teaching children how to sail in 1953. Local businesses purchased and sponsored small wooden prams, each choosing a different color with matching sails and hulls. These stout eight-foot sailing dinghies with their square bows and traditional gaff-rigged sails peppered Sturgeon Bay’s inner harbor throughout summer days. The pram fleet would remain the mainstay for instruction to present day.

To truly know how a boat connects with the water, wind, and the human touch one must first sail a little boat. The response of a boat’s rudder and sail adjustment is felt profoundly in light craft. Small boats, hands, and eager minds produce the most seasoned sailors. As early as nine years of age, children are skippering their own prams through buoyed courses just a short distance from the berths of 1,000-foot freighters at the Bay Shipbuilding Corporation. A move from the Sturgeon Bay Yacht Club to the outer bay allows for more room to sail and keeps boats from getting tangled in the weed beds of the inner harbor.

As a single-handed sailor, youngsters instantly become skipper, sail trimmer and navigator. They learn to shift their body weight to control the heel of their small craft. This invaluable experience plays itself out in larger racing boats as students evolve in their sailing venues. Those with a passion for the sport stick with the classes and move into double-handed boats with two to three sails. These boats require an orchestrated effort between skipper and crew to maintain balance, sail trim and symmetry. Whether racing or day sailing, students learn to “mind the helm,” trim the sails and look to the wind for their next move.

Many former students are happy to simply reflect on their training as fond memories and great summer fun. Still others have used their experience as a foundation on which to build. Students have gone on to gain college scholarships and become NCAA members on sailing teams. Others have made lifelong careers as yacht captains and are currently following the sun onboard mega-yachts and schooners on oceans and seas the world over. Of course, give a child an education and the sky, or in this case Oceania, may be the limit.

And yet the goal of the small yacht club in Sturgeon Bay was not to create mega-yacht captains, even though their vision has led people to successful careers. 1953 brought an abundance of eager learners from ages nine to fourteen. This was truly the beginning of the club’s junior program. Apparently the enthusiasm was no match for the harried volunteer instructors who resigned at the end of the 1954 season. To fill the vacancy in this volunteer program that had no class fee, a new group of people and boats took the helm of the fledging foundation.

Enter Harry Purinton who in 1958 became the Pram Committee Chairman. Harry, who was the grandfather of sailors both literally and figuratively, ran the foundation until 1977. Harry’s relentless tasks included everything from teaching, scraping and painting boats to maintaining budgets and organizing the group’s big fundraiser – the Spaghetti Dinner. Harry passed away in 1989, but the instructional program that he shepherded into a viable and thriving foundation still remains.

Today the program boasts a new and improved fleet. Gone are the old wooden prams with their peeling paint and leaks. New Optimist prams were purchased in their place and a fleet of 420s, double-handed boats for older or advanced sailors, has replaced an aged Flying Junior class. The largest boats, the Flying Scots, are nineteen feet in length and have been the mainstay for adult students for years. The program truly has a boat for all ages and is an excellent resource for learning. Even if your desire is to charter larger boats for cruising, the place to perfect your art is on one of the foundation’s many dinghies.

As students wait for wind to fill in on the hottest of days, impromptu swims and water fights with bailers make for great fun. Traveling regattas have historically brought the foundation around the Great Lakes in hopes of bringing traveling trophies home to the Sturgeon Bay Yacht Club. In 1968 the program became its own non-profit yacht club, but it still represents the club that gave it its start so many years ago. This summer the program continues to train sailors with their maritime headquarters nestled between Bay Shipbuilding and Sunset Park. Appropriately running out of the old Maritime Museum location, the Sail Training Foundation is still there to teach you and your family the joys of sailing.