Wait, back up. Sweet potato beer?

Yes, The Bruery of Orange County, Calif., has stepped up to the plate with a beautiful yammy beer, basically giving the finger to that pompous pumpkin that thinks it owns the holidays from October to New Year’s Day.

The Bruery, god bless ‘em everyone!, pledge allegiance to the humble sweet potato, which is just Midwestern for “yam.”

All hail the mighty yam!

(Actually, I do know there is a difference between the yam and sweet potato, but that knowledge does not help this riff.) 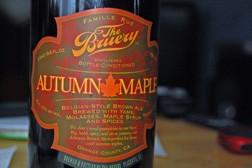 This Autumn Maple by The Bruery is, according to the label, “Belgian-Style Brown Ale Brewed with Yams, Molasses, Maple Syrup and Spices.”

Well, what else would you expect from guys who can’t spell brewery? – An unconventional autumnal ale, perhaps?

Pumpkins grow above ground. Yams grow under ground. Wouldn’t you want to connote that earthy death thing in an autumnal beer? I think it is perfectly conveyed here with natural ingredients, all of which are named on the label (see below for an example done wrong).

I have done a fair amount of brewing with maple sap and syrup. I did a porter once for a homebrew competition that used five gallons of maple sap instead of water (Sap Happy Porter was its name).

I recognize the maple in this beer. It is not the sweet commercial maple flavor. It’s earthier than that, and this is one very earthy beer.

The only other Bruery beer I’ve had was their exquisite 2012 holiday issue, Five Golden Rings, made with pineapple rings. If you don’t know about this, The Bruery is following the song “The Twelve Days of Christmas” with its holiday releases. I can’t imagine what they came up with for 2011 when they were up to four colly birds. This year is six geese a-laying. You begin to realize how bird-centric the song is – geese, swans, turtle doves, French hens, colly birds (?) and that partridge in the pear tree. Quite a challenge for any bruery.

I’m OK with everything up to “Natural Flavors.” Really? What does that mean exactly? 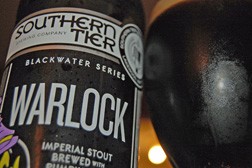 I suspect the Natural flavors are nothing more than traditional pumpkin pie spices – nutmeg, cinnamon, vanilla, maybe even cloves and ginger – but subtly spiced, not in the heavy-handed way where the spice is so thick you can almost feel the grain of the dried spices in the beer. Or at least those are the natural flavors I envisioned after I was able to shake off the flood of bad Natural Flavors that were crowding my imagination and actually focus on the beer.

Yes, I know the brewers are just trying to be mysterious, but that’s just not funny, especially when you have made a beer as exquisite as this. It tastes like a beer brewed in a fat, black pumpkin. It tastes of darkness and fertility, always a combination with weighty consequences.

I put this on the very top tier of autumnal beers.