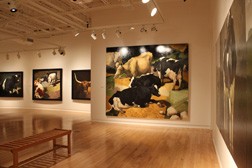 An exhibition of recent large-scale paintings by Sister Bay artist Craig Blietz opened at The Bush Art Center at St. Norbert College in De Pere. “Yard: The Art of Craig Blietz” features nine paintings, some as large as 8 foot by 9 foot, and will be displayed through March 28. This is the third of four venues that the exhibition will have traveled to during a span of ten months.

In conjunction with the exhibit, Blietz will conduct critiques of Art & Design Major Students at the college as well as present a lecture on his work. Blietz will also appear on the Collegeʼs cable television program Conversations from St. Norbert College, where Kevin Quinn, Ph.D, will interview him about the exhibit and his career.

A book has been produced in conjunction with the exhibit of the same name and is available for purchase through the St. Norbert College Bookstore or Edgewood Orchard Galleries in Fish Creek.

Blietz is best known for his rural and agrarian inspired imagery and his Formalist approach to painting. His imagery conveys a surreal interpretation of the “new pastoral” scene. Blietz is represented locally by Edgewood Orchard Galleries.