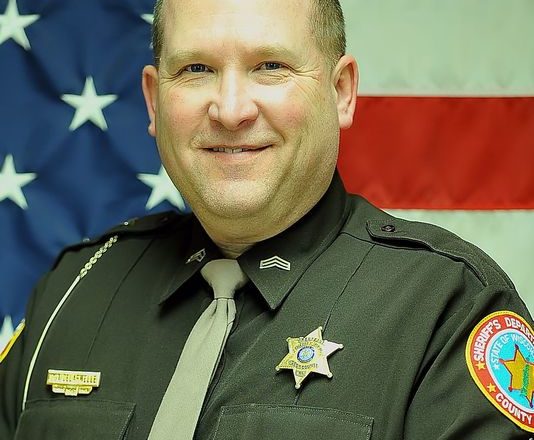 When Steve Delarwelle started taking police science courses at NWTC during the day after his night shift at former Sturgeon Bay shipbuilder Peterson Builders, it was with the intention of securing a future for his young family. He never saw himself rising to the role of sheriff of Door County.

“I worked at Peterson’s for 10 years before I started here. I saw the writing on the wall when things were slowing down,” Delarwelle said. “The last couple years there, I worked nights so I could go to school during the day. I had friends that were in the business and they always talked highly of the job. It was a lot of days with four hours of sleep, but it turned out to be a pretty good idea.”

A few years after Delarwelle made the move to the Door County Sheriff’s Department, Peterson’s closed its doors.

“It was the right decision and I’d do it all over again,” he said. “But I never thought of being sheriff.”

Until being elected sheriff in November 2014 to replace retiring Sheriff Terry Vogel, Delarwelle had spent 22 years driving a patrol car through the county, most of that on the night shift so someone, either he or his wife Tree, would be home for their two sons.

“I enjoyed being on patrol,” he said. “The group I worked with, we all kind of grew up in the sheriff’s department together. We had a group that stayed on that shift 10, 12 years. We knew what each other was going to do before they did it. Being able to work in a group like that was very enjoyable and I miss that part of it. Other than that, I guess just the fact that you’re out in the public eye so much now. Working midnights you weren’t, now you’re the face of the department. That’s a little bit daunting, but I grew up in this county. I played ball in the county league for 17 years and I know a lot of people throughout the county, so it’s not like I’m a stranger or anything.”

Even now, a year into being sheriff, does he still miss the road?

“Absolutely. I always loved being on patrol and I miss it a lot. I still go out. I did some extra patrol one night recently. Myself and Chief Deputy Pat McCarty, he misses it too. We try and get out. He helps on calls yet. I don’t get to do it as much as I like, but I still try to get out there even if it’s to back somebody up on something.

“If it wasn’t for the people I work with encouraging me to do it [run for sheriff], I’d still be on patrol. But they thought I would be good at it, so I thought I’d better try and see how it goes. The worst that could happen is that I’d lose and would go back to a job I love.”

But the Forestville native defeated three other Republican candidates in the primary election and then Democratic rival Lt. Tammy Sternard in the fall 2014 general election.

Delarwelle admits there was a learning curve to becoming sheriff.

“Being on nights, I didn’t deal with administration a lot. Honestly, I knew the basics of what they were doing, but all the details, getting that perspective coming in was an eye opener,” he said. “Not really knowing what to expect, learning on the fly for the first year. It’s been a challenge, but we have some very good people in the office who have helped.”

One of these is his right hand man, Chief Deputy Pat McCarty.

“Pat and I worked together on midnights since he came on board,” Delarwelle said. “He’s been just tremendous. He’s a go-getter, he’s disciplined, he’s been a leader in our department for years, doing firearms and training. He brings a lot of great ideas to the table. We’ve increased our meetings with the supervisors. Every month we come up with more things to discuss and continue to move forward and make it a great place to work.”

Those meetings are a follow-through to Delarwelle’s campaign for office.

“We’re trying to make it more democratic. That was always my goal through the campaign, to get more people to have a voice,” he said. “One person can’t think of everything for the whole department. You need other people and we have some very good ones that I am honored to work with them. Everybody gets their say and you get a voice. I think that’s one of the things I’m most happy with.”

Delarwelle mentions that he has also been helped through his first year by former sheriff Charlie Brann, who serves on the Door County Board of Supervisors and chairs the Law Enforcement Committee.

“He has been a lot of help to me,” Delarwelle said. “He’s been there, done that. He hired me, so that was nice.”

How has being sheriff changed his life?

“I get to sleep with my wife again after working nights for more than 22 years,” he said.