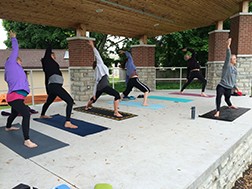 I was surprised to find camouflage, the favored print of Guerillas and northern Wisconsinites, absent from Guerilla Yoga, a free class offered in Sturgeon Bay’s Martin Park, last Saturday. I did not even see a Che Guevara t-shirt.

“I had no idea what guerilla even meant,” instructor Shalyn Rose said, and admitted, “It’s basically for publicity.” Goal achieved. I woke up at six thirty on a rainy Saturday morning to attend.

Shalyn, who is young, petite and muscular, wore black leggings and a grey sweatshirt with the words “Spiritual Gangster” printed on the chest.

That Shalyn is neither guerilla, nor gangster, became quickly apparent. She padded cheerfully around on her black lululemon mat before class, showing off her new forearm tattoo, a lotus, which an artist had inked on her the day before in celebration of her one-year anniversary as a yoga instructor.

It is common for businesses to fail to select a title that reflects their work. A friend of mine, who is a French professor, was once consulted by a nail salon that wanted to spell their shop’s name correctly in French. Upon learning that the correct spelling didn’t contain an l’, the owners reverted back to an incorrect spelling. Nevertheless, the manicure that the professor received in return for her services was excellent. Shalyn has a similar problem.

The class, which meets weekly in the same location, at the same time, lacks the spontaneity that “guerilla” implies. It is not a protest, or a social reform movement, where small companies of yogis use their “flow” to create change. Guerillas don’t go to free yoga in the park, and neither do gangsters, even though they should, because the class is free, and it’s the hardened organized criminals and off-the-grid militants who could really use an hour of stretching and relaxation to connect with their breath and the world around them.

The five women who did attend free yoga in the park represented a range of skill and age. One woman had left her house early to escape for an hour of peace before her children woke up. Another shuffled up the pavilion steps, and flopped onto a mat. “Seven thirty sure is early after Steelbridge Songfest,” she groaned.

Steven, man with the individually packaged toes, arrived after I did. He sat down, leaned forward, and pressed his chest to his thighs. I estimated that he was about 46 years older than me, and twice as limber. Shalyn told me that he was the one responsible for the title “Guerilla Yoga,” and that he had designed a press release for her.

Shalyn made small talk while we warmed up, and set our mats underneath the park pavilion.

“My mom drove me here today,” she said, “later she’s going to get her hair done. I told her she should come, but she said she would stay in the car.”

Neither of Shalyn’s parents had ever attended a class, which is a shame, because the class itself was excellent, and I am convinced my spine grew an inch between our first exercises and our last. Perhaps her parents are afraid that her daughter is part of a revolutionary Marxist faction of yogis, and if that is the case, I can assure them that Guerilla Yoga isn’t scary at all; it’s just free outdoor yoga on Saturdays.

Shalyn plans to continue the free classes through August, every Saturday at 7:30 am, or as long as interest remains.