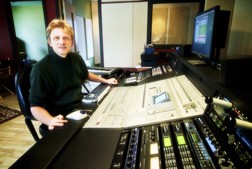 Hans Christian produced and recorded “You Are the Music of My Silence” at Studio 330 in Sturgeon Bay. Photo by Len Villano.

A new instrumental CD, You Are the Music of My Silence, featuring award-winning Canadian musician Harry Manx and Door County musician Hans Christian, was recently released on the Allemande Music label. This CD, produced by Christian, was recorded at Sturgeon Bay’s Studio 330 between October of 2011 and the spring of 2012.

Manx, a globally touring performer known for his Indian/blues style of singing, first came to Door County to perform with Ritchie Havens at the Peg Egan Performing Arts Center. During a repeat visit he met Christian and an instant musical bond was formed. Manx invited Christian to perform with him in Toronto, New England, and the Midwest, and the instrumental collaboration was born.

Manx spent one week in the studio to record the basic tracks before handing over the project to Christian, who added his own musical parts and finished the production. 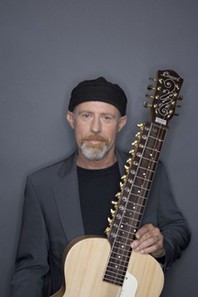 Harry Manx collaborated with Christian after the two met in Door County.

This collaboration is remarkable for its musical chemistry – world music and Western classical influences form the main ingredients. The CD is geared towards alternative, yoga, and meditative audiences. You Are The Music Of My Silence is a journey into original creativity that intends to enrich, inspire, and uplift.