This article is part of an ongoing series on the immigrant population that lives in the shadows of Door County.

Mauricio Martinez has lived more than half of his 34 years in Door County. His wife, Tori, grew up in Green Bay and worked for four years as the English Language Learner specialist at Sevastopol High School. His two children, six-year-old Malaya and three-year-old Rio, were born in Sturgeon Bay.

But today Mauricio is living in Puerto Vallarta, Mexico, waiting for U.S. Citizenship and Immigration Services to process his application for a Permanent Resident Card, or Green Card, so he can return to Door County and restart his life here. 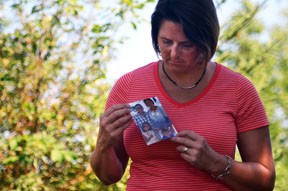 While visiting Door County this summer, Tori Martinez holds a picture of her family. Her husband remained in Puerto Vallarta, Mexico, where the family relocated last August while they await the processing of his application for a Permanent Resident Card, or Green Card. Photo by Katie Sikora.

Tori and Mauricio first met when he was a teenager working in the kitchen of a Northern Door restaurant nearly 20 years ago. Mauricio had followed his brother into that restaurant’s kitchen, pulling on the rope of family connections that immigrants have used to establish footholds for generations.

The 10th of 12 kids, his family comes from Apaxpla, a small town in the southwest Mexican state of Guerrero – the origin of more emigrants to the United States than any other state in Mexico. The region relies heavily on tourism but is also the most violent state in the Mexican drug war that has claimed 50,000 lives over the last six years.

At age 15 Mauricio moved to the United States in what Tori describes as a “right of passage” in so many small Mexican towns. “You move to the states, get a job, make some money and start sending some home.”

An estimated $20 billion is remitted back to Mexico every year by immigrants, both legal and illegal, working in the United States.

When they met they were just restaurant co-workers. Years later, after Tori had lived in Alaska for four years and spent several other years away from the peninsula, she returned to work at the restaurant, and they connected, Mauricio now a young man.

When their relationship grew serious he brought up the elephant in the room.

“You do know that I’m an illegal immigrant, right?” he asked her.

In 2005 they got married, a step that most Americans assume would make Mauricio a citizen. He remained undocumented.

“We lived in Door County, married, for four years,” Tori explains. “It became difficult to have a normal life because he couldn’t get a valid license.”

In Chicago and other large cities with public transportation, an undocumented immigrant can carve out a life without a license and avoid police by keeping their head down. In rural areas like Door County, driving is essential for employment.

“He kept getting stopped,” Tori says. “It became a huge hassle.”

She says she wasn’t worried about deportation. Undocumented immigrants in Door County are largely off of the Immigration and Customs Enforcement (I.C.E.) agency’s radar because they’re so spread out. I.C.E. can target a single packing plant in Green Bay or a manufacturing plant in Chicago to round up dozens of undocumented immigrants. In Door County they would have to raid dozens of businesses and use many more agents and resources to find the same number at the peninsula’s farms, hotels and restaurants.

At the end of the day the agency isn’t very concerned with undocumented immigrants who have melded into their communities with families, jobs, and connections. Congress emphasizes trying to ward off violent criminals and drug traffickers, and those are the places agents put in their time.

(Read More:  Why the Immigration Debate Matters to Door County More than You Think)

“As a result, we can’t count any of the money he makes toward getting a loan for a house or buying a car,” Tori says. “So we showed half the income. He can’t be on my insurance. You can’t get the benefits. That hangs heavy on a family.”

By 2010 they had two children and Tori was working as the English Language Learner teacher at Sevastopol High School, helping the school’s growing Hispanic student base with their studies and language skills.

That was when they decided it was time to file a petition for Mauricio to become a citizen, a long process that will likely cost them at least $6,000 in fees and legal costs when it’s all said and done. It also meant up-rooting their family.

Had Mauricio emigrated to the U.S. legally, on a work visa for example, they could have applied for a change of status and likely received it. Since he crossed the border illegally, even though he married a U.S. citizen with whom he had two children, he had to return to Mexico while his paperwork is processed, which is likely to take two years.

Rather than split their family, Tori and Mauricio decided to move the family to Mexico while the process played out. They sold nearly all of their belongings last August, packed up their lives and moved to Puerto Vallarta with their two children.

“I had a good job with benefits, and I quit to move down with my husband and make pesos,” she says, laughing. They knew too many friends whose families were split up – they wanted to stay together.

“We moved to Puerto Vallarta, where because of American tourism, there is money and jobs,” she says. “Even there my husband made $18 in 8 hours in a restaurant, 200 pesos. No wonder they come to the United States! The minimum wage is about $5.50 a day, or 57 pesos.”

Malaya was sad at first, leaving behind friends and missing their house. She grasps the situation now and has adjusted, making new friends in Mexico and learning the language.

When Tori returned this summer to visit her parents for two months she chose her words carefully when talking to her children.

“I told them we were visiting, not that we’re going home,” she says. “I want them to see home as wherever the family is.”

It’s important, because though she is optimistic Mauricio will get his permanent resident card, allowing him to return and work toward citizenship, it’s not a sure thing. Immigration Services could place a 10-year bar from the country on him.

“You never know with immigration,” Tori says. “I have a friend down there doing the same thing we are doing. She’s been there five and a half years, he got a 10-year bar with no police record.”

Tori wants a better system, and she wants people to better understand why people like Mauricio go to such great lengths to live in America, legally or not. She also knows that this is the life they chose, and they’re willing to deal with what comes their way.

Back in Puerto Vallarta, Mauricio rolls with the punches pretty well, she says, and if he gets a 10-year bar, they’ll roll with that too.

“We knew that was the worst-case scenario,” she says. “If that happens, we could stay in Mexico, we could go to another country. We’ll have to figure it out.”