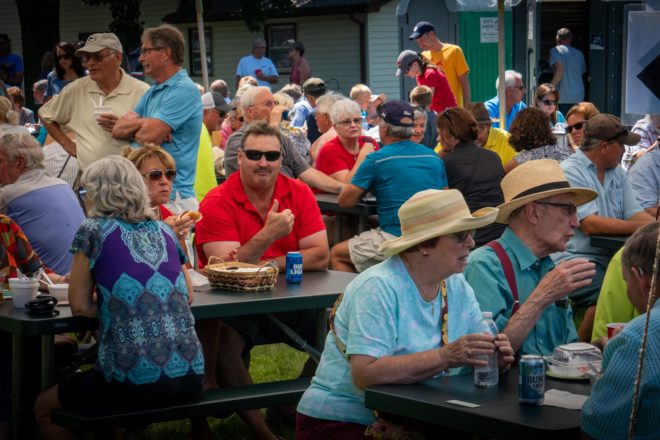 Fun to say and delicious to eat, booyah – sometimes spelled “booya,” “bouja” or “bouyou” – is synonymous with Belgian culture and the Kermiss: a traditional celebration that marks the beginning of the fall harvest season. And if you head to the Belgian Heritage Center on Sunday, Aug. 21, you can enjoy a bowl of the traditional stew and other delicious Belgian recipes.

The Belgian Heritage Center, 1255 Cty DK in Brussels, tells the story of Wisconsin’s Belgian settlement through preserving and sharing the unique elements of Belgian culture, including customs, architecture, language, festivals and food.

“Years ago, the communities would have a harvest celebration,” said Joe Alexander, chair of the Belgian Heritage Center. “They’d have a mass, and then after the mass, there would be a big celebration – usually a two- to three-day event, Friday, Saturday and Sunday.”

Southern Door County is home to the largest North American Belgian settlement, so it’s no wonder the traditions of the homeland still run strong, including Kermiss celebrations and the foods that go with it. Alexander said that some of the area’s communities have their own Kermiss celebrations, but the Belgian Heritage Center’s event – aside from being the center’s largest annual fundraiser – provides an opportunity to share the tradition with people who are not of Belgian descent.

A focal point of every Kermiss celebration is the food, including the dish that Alexander described as something in between a chicken soup and a chicken stew.

“Booyah is chicken and some vegetables,” he said. “Back when they first started making it, it was [made from] what they had in the refrigerator or needed to be used up.”

Traditionally, it was cooked outdoors in a giant kettle designed to feed the masses – generally those who were returning from working in the fields. The name “booyah” is steeped in folklore and legend, with speculation that it stems from the Walloon language and the phonetic pronunciation of the word for “boil” (bouillir) or “broth” (bouillon).

And although the origin of the dish and its name can be debated, one thing – as far as Alexander is concerned – is certain: “I think our booyah is the best.”

Try it for yourself, and if you want to learn even more about the storied dish, the Kermiss includes a 1 pm screening of the new documentary History of Belgian Booyah.

While you’re at the Kermiss, you can also indulge in other traditional foods and specialties, including tripp (a sausage similar to a bratwurst that’s stuffed with cabbage and spices); jutt (a cooked cabbage dish made with bacon, side pork or salt pork); a variety of Belgian pies (sweet, raised-dough pastries that are traditionally filled with some type of fruit and topped with a cottage-cheese topping); and tortes (decadent desserts that marry the goodness of both cake and pie).

Though the Kermiss festival focuses on food, it will also feature live music by the Mad Cats (11 am – 3 pm), an antique farm-implement demonstration, a craft station for the kids, a raffle and a silent auction. The Belgian Heritage Center – an educational treat in itself – will also be open to visitors.

“There are some displays in there that talk about Kermisses,” Alexander said.

But the big thing – about both the center’s displays and the Kermiss itself – is the ability to experience Belgian culture and history firsthand.
“You can get an idea of the history of our food and have the opportunity to try it,” he said. “And it’s fun.”
All Kermiss proceeds will benefit the Belgian Heritage Center and its ongoing projects. Learn more about the center and the Kermiss at belgianheritagecenter.org.