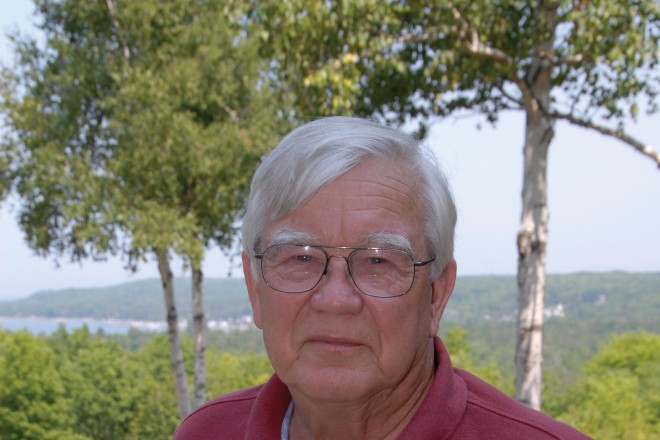 “You have to find the right insect to study, to take you to the right places.” This is what Dr. Guy Louis Bush always told his entomology and evolutionary biology students at the beginning of the semester. Dr. Bush is speaking from experience, as his study of the apple maggot fly, Rhagoletis pomonella, has taken him all over the world, including Door County.

With a slightly unusual passion and the conviction that the current model of species evolution for his day could be expanded upon, Dr. Bush began spending his summers in Door County in 1970. An insect infestation in the fruit of the local cherry orchards by a species of fly that had previously only attacked apple and hawthorn trees provided Dr. Bush an ideal field research opportunity. This type of fly, Rhagoletis pomonella, was Dr. Bush’s specialty and the entomologist brought his wife and a group of students from the University of Texas at Austin to Door County to begin a research project that would evolve into a ground-breaking career and a permanent connection with the peninsula.

When asked why he chose entomology, Dr. Bush gets a smile on his face and says, “I have always been interested in the natural world and insects in particular. And I have always been a collector. When I was younger we lived in Rio de Janeiro, Brazil, and I would spend my free time in the rainforest gathering all kinds of wild things – insects, snakes, birds. I covered the trees in my back yard with orchids and epiphytes and I installed an aviary on the roof for my bird collection.” Dr. Bush’s father was working for the U.S. Department of Agriculture as an Agricultural Attaché. He had posts in Brazil and Cuba during Guy’s youth. The diverse species that Bush encountered while traveling with his father in these foreign areas furthered his interest in the natural world and how it worked.

This fascination propelled Dr. Bush toward studying the biological sciences in college and eventually into entomology, the study of insects. Dr. Bush graduated from Iowa State University with a Bachelor of Science in entomology, which was followed by a Masters of Science from Virginia Polytechnic Institute and a Ph.D. in biology from Harvard. Dr. Bush also spent two years in Australia on a postdoctoral fellowship at the University of Melbourne. He brought his wife, Dorie, with him for the two-year stretch. A significant part of his work was the collection of specimens from the field and this allowed him to travel throughout Australia. At that time there was only one road spanning the southern half of the continent and it consisted of 1,700 miles of flat, arid terrain. So into the wilderness they traveled, in a Volkswagen Bug. Dorie still chuckles when she thinks of their time on the road and says, “If you can travel with someone across Australia AND back again on the same road…”

Dr. Bush was back at Harvard working on his thesis, focused on the formation of new species, when a report from the U.S. Department of Agriculture caught his eye. The report was about Door County and how the cherry orchards were being infested with a particular type of fruit fly. This fly just happened to be the Rhagoletis pomonella. Dr. Bush was curious how this particular type of fly, which had previously specialized on apple and hawthorn fruits, would be able to establish a population on cherries so quickly. He was also curious to discover if this was indeed the same type of fly or if it had undergone genetic changes that would indicate an entirely new host race or species. Though he would not be able to venture to Wisconsin for the next few years, the opportunity was never far from his mind.

In 1970, Dr. Bush was an Assistant Professor at the University of Texas at Austin and the time to pursue research in the north had come. He and Dorie decided to come to the peninsula for the summer to begin the field research project, one that would end up lasting until 1992. Bush and his students began a series of ongoing tests at the Peninsular Agricultural Research Station located just north of Sturgeon Bay. They began by attempting to determine if the species of Rhagoletis pomonella fly present here was the same as elsewhere. Through extensive testing and time in both the field and laboratory, Bush and his students were able to draw the conclusion that the cherry fruit flies were genetically different from the apple and hawthorn fruit flies.

Once this distinction was made, the study shifted in nature to discover just how these flies had changed so rapidly. Conventional wisdom was that it would take many thousands of years for a geographically-isolated population to evolve into a new species. The research that Dr. Bush was conducting in Door County directly challenged this theory, as it supported a theory termed “sympatric speciation.” Sympatric speciation was a little-known and less-supported theory of evolution that allowed for the possibility of rapid evolution through the ecological separation of populations and rapid adaptation to new resources through genetic modifications. With evidence from his work in Door County, Dr. Bush was able to demonstrate that new species can evolve in a very short time in the absence of geographic isolation. This provided insight into the origin of the large number of separate insect species on our planet, as well as providing solid proof of the sympatric speciation model of evolution.

The revolutionary attributes and high caliber of Dr. Bush’s body of work opened the door to academic opportunities all over the world. As a visiting Fellow and Professor, Dr. Bush held positions in Switzerland, Brazil, Germany, England (Oxford) and Puerto Rico. His field research also took him to remote areas worldwide. Through all of his travels, though,  Door County remained a constant, as the ongoing research project brought him back to the county almost yearly.

As Guy, Dorie and their three children journeyed back to the peninsula summer after summer, Door County became firmly lodged in the fabric of their family. Through the years they stayed in various places, from the (now disappeared) Val of Valhalla campground near Carlsville to North Coral Hill road in Ephraim. In 1987, the Bushes purchased a home in Ephraim. Hiking the peninsula (whether to collect specimens or just for fun), sailing the waters of Green Bay and spending evenings around the fire with friends made for memorable and enjoyable summers. The Bushes have been active members of the Ephraim summer community and Dr. Bush was Commodore of the Ephraim Yacht Club from 1985 to 1986. When it came time to retire, Guy and Dorie chose Ephraim as their permanent home base. These days Dr. Bush is more often found painting the landscape of the peninsula, rather than traversing it in hiking boots. He has taken his talent for sketching, honed from many years of drawing the insect specimens he was studying under the microscope, and transferred it to a new medium. Classes at the Peninsula Art School and with local artist Ed Fenendael have helped him develop his skill, and the inspiring views from his windows and his love of art are evident in his work. Dr. Bush is still active in the world of Biological Sciences, however, holding an Adjunct Professorship at the University of Texas at Austin in Integrative Biology during the winter months. But, in the summer, Guy and Dorie are to be found in Door County, the place that the right insect led them to.