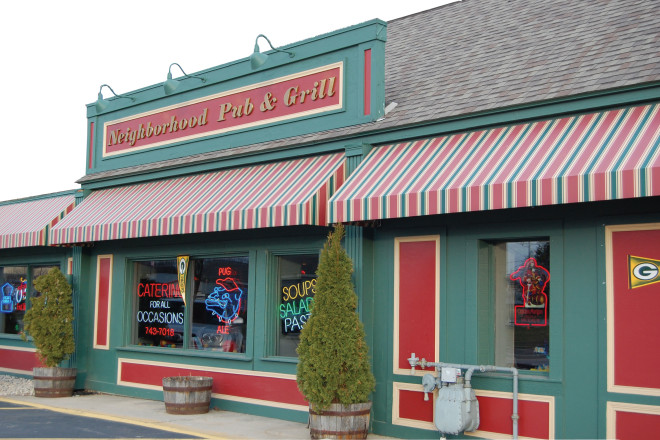 Ask just about anyone within 20 miles of Sturgeon Bay to meet at “The Pub” and they’ll know what you’re talking about. The Neighborhood Pub, located on Sturgeon Bay’s business thoroughfare, has been serving up food and drink to locals and visitors for 14 years. 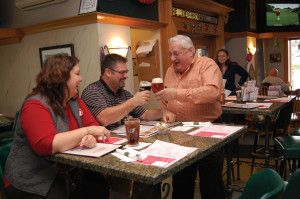 Although The Pub serves a wide variety of beverages, including imported beers and their own Pug Ale, it is the outstanding quality and variety of food that brings customers back time after time. Everyone has their favorites:  mine is the Black Forest Sandwich, thin-sliced prime rib and turkey served open faced with melted Swiss cheese and loaded with sautéed onions and mushrooms. My girls love the broasted chicken drumsticks, and my husband favors their incredibly generous Reuben. Owner Paul Stoltman is proud of the versatility of his menu:  “Families can get it all here, we’re one stop shopping,” laughs Paul. “We’ve got 100 selections for adults and 12 for kids,” he says. “We’ve got people who eat here four or five times a week.”

You know a restaurant is good when it’s frequented by others in the business; the day I came by to chat with Paul, Mike and Barb Laute 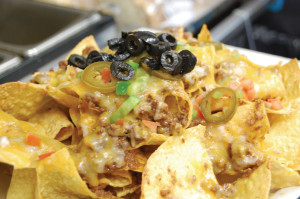 nbach of Mike’s Port Pub in Jacksoport were seated next to us, enjoying the lunch specials of fresh scallops over pasta and Cajun pan fried chicken. By the time I came by to say hello, their plates were empty. “We were in town,” they explained. “It was very good.” Customer favorites include prime rib, Friday fish fry, and Mexican specials such as taco salad and loaded nachos, as well as an impressive variety of soups, all made from scratch. “We have four soups every day,” says Paul, “including chili and chicken dumpling soup.” The Pub does an impressive carry-out business as well, and unlike most bar/restaurants, 70 percent of its sales come from food. The Pub also has a robust catering business that services weddings, parties, and other events.

Stoltman, who hails from Minnesota, had been visiting Door County for years as a vacatio 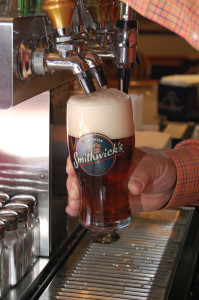 ner when he decided to make a career change. He had never run a restaurant before, but when a local Realtor asked him, “What would you think about a bar?” he and his wife Joan jumped at the chance. The building that now houses The Pub began as a small grocery store located across the street from a large cherry orchard. It later became a tavern, and when Stoltman bought the place in 1997, he cooked a limited menu using a flattop grill and fryer which stood on the bar. It wasn’t long before he started visualizing a more comprehensive restaurant, and he designed and built the large kitchen that is now kept humming seven days a week, 362 days a year.

The Pub boasts a cozy atmosphere:  plenty of tables, large and small, for families and gatherings of any size, as well as a handsome wooden bar that wraps around the center of the restaurant. The walls are adorned with dozens of colorful life rings, marked with the names of local ships and signed by their crews. Stoltman explains, “All these life rings you see come from teams and crews who’ve spent a lot of time here, and felt that this place was their home away from home. They wanted to leave something here.”

The Pub’s customers have influenced the menu as well. About 10 years ago, a crew of ship workers from Louisiana were unable to get back ho 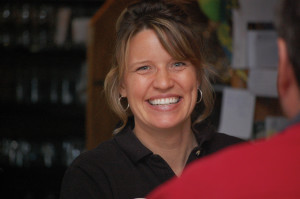 me for Mardi Gras. “One of the guys got his mother’s recipe for etouffee, and we prepared it for them. These 12 guys ate it all, and they wanted to come back the next day for more,” chuckles Stoltman. Thus was born the Pub’s Mardi Gras Menu which is served every year and features items such a chicken and andouille sausage gumbo, lobster and shrimp Ponchatrain, and Bourbon Street bread pudding, in addition to the original crawfish etouffee.

The Neighborhood Pub is best known for their seasonal menus, especially Oktoberfest selections which, due to popular demand, are offered for four extended weekends in the fall. “A lot of these recipes came from my mother,” says Stoltman.

In addition to seasonal offerings, The Pub’s head chef, Matt MacMillen, is constantly experimenting and adding new tastes to the menu. Stoltman praises him as a creative force in the kitchen. “I can’t hold him back,” says Stoltman. 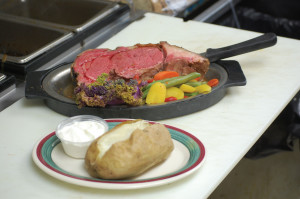 While Paul Stoltman quietly oils the business from the background, it is his friendly and attentive wait and barstaff who make the business shine. Sarah Olson has been working at the pub for years. Sarah and her co-workers create a welcoming atmosphere for all customers, from ball teams celebrating after a win, to business lunchers, to families dining after church. But Sarah has a special place in her heart for kids, and every child gets crayons, a coloring sheet, and a big smile from Sarah. If they’re good they might even get a sweet treat after lunch, if it’s alright with mom or dad. Stoltman refers to his front-of-house employees as “my girls,” and he knows they are the best in the business. They bring in the repeat customers with their timely and attentive service, and also help with The Pub’s other claim to fame:  its longtime commitment to charitable causes. Specifically, the Neighborhood Pub has been raising money for the Multiple Sclerosis Foundation since its beginnings, and this year they brought in $17,850 for the cause. Employees solicit items for the popular MS silent auction, and Stoltman heads up a team of Door County snowmobilers 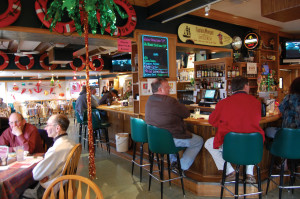 who travel throughout Wisconsin each year and bring in lots of pledges. “We also give to the United Way, the hospital, and many other organizations,” says Stoltman proudly.

When asked about the effects of the economic downturn on his business, Stoltman concedes that growth was flat in 2009, but other than that “we’ve seen growth every single year.” The phenomenal success of The Pub is no doubt a result of its excellent service and ever-evolving menu. But Stoltman has also been ahead of the curve in technological developments, creating a website for the business seven years ago, and offering an interactive “Pub Club” membership which keeps customers abreast of happenings as well as offering them points towards gift certificates and freebies.

Next time somebody asks you to “Meet me at The Pub,” say yes. Order yourself a frosty mug of something, page through the menu, and know you can’t possibly try everything this time around, so you’ll be back again soon.