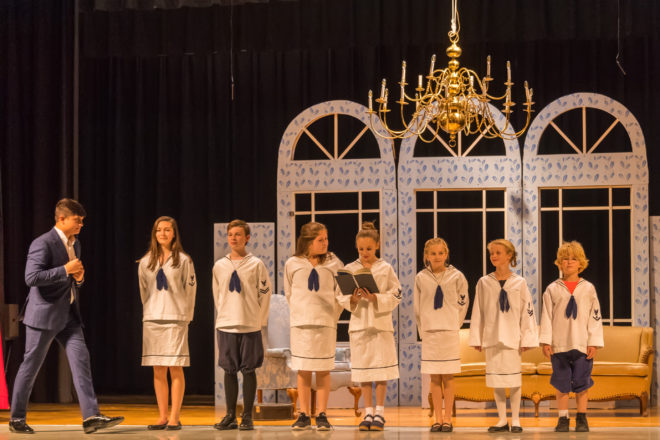 It seemed like Halloween came a couple days early when walking into Sevastopol Schools to see the dress rehearsal for the high school play, The Sound of Music. Immediately upon entering near the elementary gymnatorium I saw three nuns rapidly scurrying around the higgledy-piggledy hallways, trying to get to their starting places.

Backstage, director Amy Ensign was teaching the young troupe of actors the proper way to wear a tie, and, out front, musical director Shannon Sheehan was readying the sound board for the first tech night run-through. Ensign and Sheehan have been thinking about and planning for this play for about a year, ever since the final curtain call of last year’s play. Now, with 50 students as part of the cast, crew and orchestra, they are ready to present The Sound of Music Nov. 2, 4 & 5.

Most people are familiar with The Sound of Music, a musical based on the real-life memoir of Maria von Trapp and the Trapp Family Singers. Set in Austria in 1938, the musical tells the story of Maria, who takes a job as a governess to a large family while she decides whether to become a nun. She falls in love with the children, and eventually their widowed father, Captain von Trapp. He is ordered to accept a commission in the German Navy, but he opposes the Nazis. He and Maria decide to flee Austria with the children.

The Sevastopol production follows the original stage production, so fans of the movie may see differences from the film, but all of the classic songs are there:  “My Favorite Things,” “Do Re Mi,” “Sixteen Going On Seventeen,” “Edelweiss,” and “The Sound of Music.” 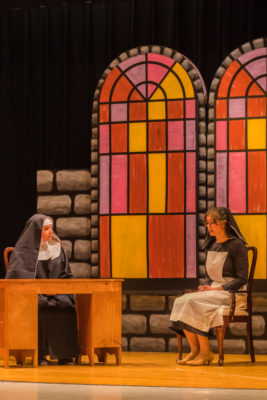 The quality of the music convinced Ensign and Sheehan that this was the play to do. Ensign said, “The music is absolutely beautiful and something Mrs. Sheehan was excited to work with and teach.”

The music was also a favorite part of putting on this production for Ensign. She said, “When I go home and wake up in the morning, it’s nice to have these songs running through my head and my heart.”

Taking on the largest roles in the play are Natalie Meikle as Maria and Manav Jandu as Captain von Trapp. Jandu steps into the role as a freshman and has proved he has a maturity level to match the part. Although a freshman, Jandu has been in previous Sevastopol productions and Ensign said he has “a beautiful voice and is a natural acting talent on stage.”

The rest of the cast is also fairly young, with Meikle being the only senior with an acting role. “It’s quite a young cast. We had plays in the past where everyone with a speaking role is a senior . . . it’s lovely to see younger students get a chance to shine and rise to the occasion,” said Ensign.

Filling out a large cast in a smaller school has been both a challenge and benefit for Ensign and everyone involved in the production. It lets some of the younger classmen step up and shine in roles where, in a larger school, they wouldn’t have the same opportunity. Ensign said, “It’s what makes plays at Sevastopol special. We open it up to middle school students and this year we opened it up to fifth grade students.”

One such fifth grader is Finn Matthews who plays the role of Admiral Von Schreiber. In his first play, Matthews is seen in one scene talking to Jandu and Ensign said, “even though there’s a size disparity, he knew his lines and clearly had a strong idea of his role.” 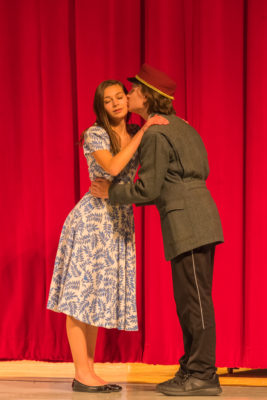 Lexie Henkel as Liesl and Merrick Mann as Rolf Gruber in Sevastopol’s ‘Sound of Music.’

The young cast of 50 students are set to impress with their production of the well-known and cherished The Sound of Music. People with fond memories of the movie will not be disappointed, especially when Maria leads the von Trapp children in “Do Re Mi.” When I left the rehearsal, I had a smile on my face.

The Sound of Music will be performed in the elementary gym on Friday, Nov. 2 at 7 pm, Sunday, Nov. 4 at 2 pm, and Monday, Nov. 5 at 7 pm. Tickets are $8 for adults and $5 for middle and high school students. All elementary students are admitted for free.