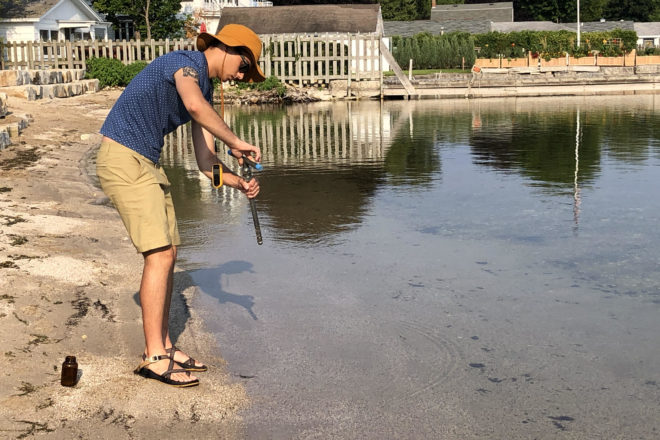 UW-Oshkosh student Jason Trzebiatowski takes a sand sample at the Fish Creek beach while on his daily beach-testing route. A UW-Oshkosh team has received funding for several projects related to the study of microplastics in Lake Michigan, and it bases its work in Door County. Photo by Craig Sterrett.

Although massive islands of floating plastic and garbage in oceans gain a lot of media attention, the Great Lakes also have a major problem with plastic waste.

“One thing most people don’t understand is about 22,000 tons of that plastic material gets put into the Great Lakes every year,” said Greg Kleinheinz, a water and wastewater professor at UW-Oshkosh. “Even though the oceans are receiving a lot of attention, recently there has been some attention paid to the Great Lakes.”

This summer, Kleinheinz is leading a group of researchers who are sharing a house in Baileys Harbor while they study the amount and effects of litter and microplastics in Lake Michigan and the Green Bay area. They test daily for bacteria and toxic types of algae in the water and for plastic particles on all of the county’s sand beaches. Each weekday, they take those samples to the laboratory at Crossroads at Big Creek on the northeast side of Sturgeon Bay.

“The biggest concern is different health effects,” said Marisa Richter, lab supervisor for the UW-Oshkosh projects. “They’re still determining how [microplastics] can affect humans, but also can affect the ecosystem.”

Plastic debris that’s smaller than five millimeters – about the size of a sesame seed – are termed “microplastics,” according to the National Oceanic and Atmospheric Administration (NOAA). These tiny plastic particles come from a variety of sources, including from larger plastic debris that degrades into smaller and smaller pieces. In addition, microbeads, a type of microplastic, are very tiny pieces of manufactured polyethylene plastic that are added as exfoliants to some health and beauty products, such as certain cleansers and toothpastes. These tiny particles, according to NOAA, easily pass through water-filtration systems and end up in the ocean and Great Lakes.

Research funding for the Great Lakes became available after companies in Milwaukee found microplastics in water used in food-grade products, Kleinheinz said. The tiny plastics could also pose a threat to the aquatic life that ingests them, causing bioaccumulation and issues that reverberate across the food chain.

“Maybe that inhibits their growth and success. So what does that mean?” Kleinheinz asked. “That means there’s less forage material for small fish. Then that means there are less medium-sized fish for salmon and trout. It’s sort of like a cascade effect. Exactly what the mechanism is for that is not completely understood. There’s a lot of research going on, and it’s largely dependent on the type of microplastic it ingests.”

The U.S. Environmental Protection Agency (EPA) is paying for plastic-debris collection bins for several boat ramps, harbors and marinas. The EPA also is buying UW-Oshkosh a 24-foot boat that will rake plastic debris and litter from harbors and marinas countywide and collect waste from bins at marinas. The boat will return to Sturgeon Bay, where scientists can sort and characterize the plastics, thanks to research funding from NOAA, Kleinheinz said.

“These are small skimmers that will take out debris automatically,” Kleinheinz said. “The boat will basically drive around the Sturgeon Bay canal and the various marinas and collect debris on sort of a set schedule.”

Litter tossed or dropped on the ground near shore eventually finds its way into the lake. A water bottle, worm container, monofilament line or some human-made fabric might break apart and vanish over the course of several months or a few years. Beads or fibers of plastic, scientists believe, remain in the water or sand for centuries.

“That small piece of plastic becomes a lot of smaller pieces of plastic, and then the polymer itself is not going to really degrade,” Richter said. “It just breaks down into smaller pieces.”

Kleinheinz said he’s hopeful for more NOAA grant money for bins at marinas such as Egg Harbor and along the Fox River next year. Mapping can help the UW-Oshkosh team determine which locations need more plastic-waste bins and trash cans. The researchers will provide the maps to local jurisdictions, and those government officials can decide where to place more trash receptacles and recycling bins, Richter said.

Door County residents and visitors can make a difference by picking up trash while hiking or visiting the beach, and by packing out everything they pack in. If the wind blows something out of a boat or off a picnic table, try to fetch it safely.

“Everybody can do their part to help keep an eye on things, use recycling containers, be conscious of where their debris is going,” Richter said. “All of those things will have an impact if everybody does their part.”