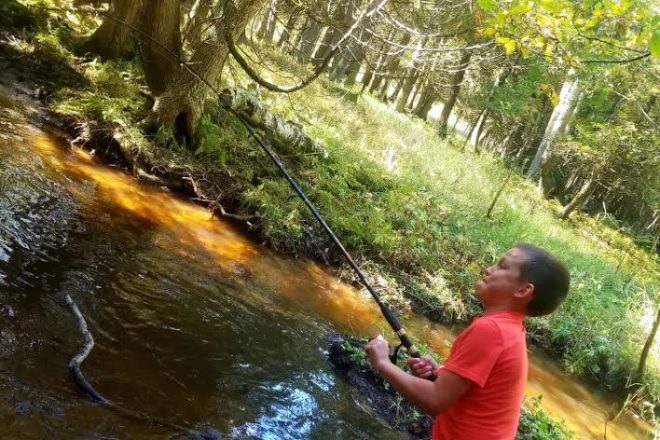 Fall colors are starting to fire up on the peninsula, the beginning of what’s likely to be a two- to three-week period of spectacular beauty.

In addition to the reds, yellows and rusty browns, the keen-eyed among you might spot some blaze orange or blaze pink this weekend as hundreds of youth hunters get out for an early shot at some venison.

Wisconsin’s annual youth gun deer hunt, Oct. 5-6, gives those aged 15 and younger an opportunity to hunt and learn under the watchful eye of experienced mentors.

As a reminder, all hunters – except those after waterfowl – are under the blaze clothing requirements during any gun deer season.

Both resident and nonresident youths are eligible to hunt deer with a gun, bow or crossbow. The bag limit is one buck with a gun buck deer harvest authorization, plus additional antlerless deer valid for the county and land type (public access or private).

The youths must be mentored by a parent, guardian or other adult who has received permission from the hunter’s parent or guardian. For hunters younger than 12 and those who have not completed hunter education, the mentor must also be a hunter-education graduate and hold a current hunting license.

Adults accompanying youth hunters may possess a bow, crossbow or gun to hunt for a game species that is open at that time, including deer with a bow or crossbow only.

An adult may not accompany more than two youth hunters during the youth gun deer hunt at any given time, and those being mentored must be within an arm’s reach at all times. Those aged 11 and younger must have one-to-one mentoring.

Mentors are encouraged to go over the four basic rules of firearm safety with the youth prior to hunting:

• Treat every gun as if it were loaded.

• Always point the muzzle in a safe direction.

• Be sure of your target and beyond.

• Keep your finger out of the trigger guard until you’re ready to shoot.

The duck and goose seasons are closed Oct. 7-11 in the southern zone, which includes Kewaunee and Door counties. They’ll reopen Oct. 12.

Keep an eye out along the roadways during the coming weeks as area sportsmen’s clubs and the DNR release ring-necked pheasants to supplement any wild survivors. That season will open Oct. 19 at 9 a.m.

Salmon Run Is On

The Besadny Anadromous Fisheries Facility on the Kewaunee River west of Kewaunee is hosting its annual open house Oct. 5, 9 am – 3 pm, when visitors may take a tour, watch egg-taking demonstrations and talk to biologists.

The first egg-taking day at Kewaunee was Thursday of this week, a day after fish were sorted for data at the Strawberry Creek facility. DNR fisheries biologist Nick Legler said even without the pump on this year, hundreds of salmon were ready and waiting when the gates to the pond were opened late last week.

Without the aid of the pump from the canal (due to high water), there’s concern that the salmon at Strawberry Creek may be stressed by a combination of crowding and low dissolved oxygen levels. Legler said that’s why staff are planning to use Kewaunee River fish for hatchery needs this year.

The public may visit both Strawberry Creek and the Besadny facility during daylight hours. There are two underwater viewing windows at the Kewaunee site that offer an unusual glimpse at chinooks, cohos, brown trout and rainbows.

Anglers hoping to hook a death-run king salmon need to be aware of three refuges: Strawberry Creek itself (including an area just outside the mouth), a posted area below the Forestville Dam on the Ahnapee River, and the area between the bridge and the Besadny collection ponds on the Kewaunee River.

One of the few bright spots with all the rain and high lake levels is that there are spawn-minded fish in just about any tributary right now.

Hunters and anglers are lamenting an absolute plague of mosquitoes this fall, and there’s no relief in sight. By the time you read this, we’ll have experienced our coldest overnight lows since spring. Unfortunately, temperatures in the 40s aren’t enough to freeze out the biting bugs. As of this Oct. 1 writing, there’s no frost in the 15-day forecast.

At least the rain is finally going to go away. After this weekend, the chance of rain is listed at less than 10 percent daily through mid-month. High temperatures should be in the mid-50s to low 60s, with plenty of sunshine.