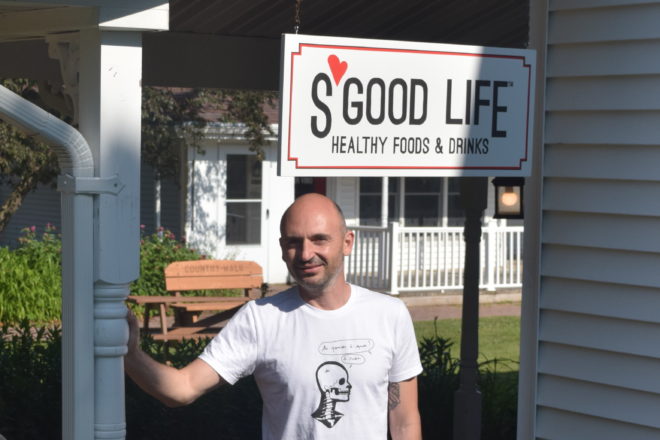 That’s what Stroyan Dimitrov has set out to discover. The owner of a juice bar and breakfast cafe that opened a month ago at the Country Walk Shops in Sister Bay, Dimitrov serves fresh-fruit smoothies, S’Good waffles and muffins, and local Isley coffee drinks. His objective is for his business to break even with its environmental impact. Hence the name: Zero Sum.

“The idea behind Zero Sum is that it is possible to have a commercial business offering fresh local and organic ingredients in every item on the menu, while supporting nature in Door County through the Door County Land Trust and other initiatives,” Dimitrov said. “The goal is to equal all that we use from the environment to investments in land preservation and habitat protection.”

With opening just a month ago and amid the coronavirus pandemic, Zero Sum has yet to reach its long-term goal of total sustainability, but with such a name, Dimitrov said, the goal will be impossible to escape. And the name was ambitious from the get-go.

“When you create a business model, it’s very hard to wrap your brain around the whole impact,” he said. “It’s not impossible, but it’s hard work.”

He decided his goals would be most attainable if he tackled each of them incrementally. For example, the energy that he uses – which he said was not much – was offset by purchasing blocks (one block = 100 kilowatt-hours) of renewable energy from Wisconsin Public Service. The shop also composts its organic waste right in Sister Bay. With the COVID-19 pandemic, however, the nonorganic waste became a challenge.

“As soon as we opened, we had to change a very major part of our business because we couldn’t interact with people,” Dimitrov said. “The idea was that we would have zero to-go containers, and that completely got obliterated.”

Charging for to-go containers so people would become more conscious about takeout was “impossible” with COVID-19, he said. Instead, he elected to pay more for the compostable products.

“It doesn’t solve the problem, but at this point, it was between us opening or staying closed,” he said.

Zero Sum sources all of its products and ingredients either organically or locally, but Dimitrov said that’s often a difficult balance to maintain.

“There is always the question of local versus organic,” he said. “For example, our spinach comes from a place that has better practices than anywhere else, but they’re not fully certified to be organic. They are, in a way, better than organic. I think in many ways the local aspect outweighs the organic ‘stamp’ – especially if you visit the farm, see all the practices and talk to people, I think it is more sustainable.”

“There is no one-stop organic supply chain up here,” he said. “To help tackle this, we work with different local farms and suppliers to get products, and so we just sort of started our own supply chain.”

“I don’t have to make big sacrifices because a wholesome product just tastes better,” he said.

He said that although, ideally, his business will succeed in being profitable, he’ll try to run it as similarly to a nonprofit as possible.

“I think it is a mindset,” he said. “This whole business was conceived with this idea in mind. I think with profit-oriented businesses, it’s not the goal. But even really small steps are completely doable. If a business is conscious of it, I think it’s not hard. It’s just about getting people on the same wavelength.”