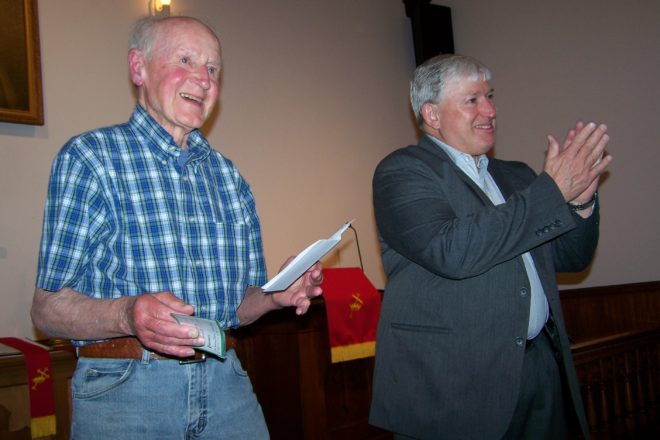 In 1993, the Rev. Don Heeringa began hosting two old-fashioned hymn sings each summer at Zion United Methodist Church. The events in what was then a little one-room church, built in 1906 for a congregation dating to 1875, proved to be very popular, sometimes drawing nearly 150 people from as many as 13 different religious denominations.
As Rev. Heeringa often noted, “People like to choose the old hymns the pastor never picks anymore.”

Zion is a mission-oriented church whose goal is to give away at least half its income each year. It has sometimes exceeded that amount and always comes close. Mission donations in 2016, for example were more than 49 percent. (And the congregation was recently recognized for paying 100 percent of Zion’s apportionments to the Wisconsin Conference for 24 consecutive years.)

Since 2002, Zion’s treasurer, Judie Gauger, has kept track of goodwill offerings at the hymn sings on Sundays near July 4 and Labor Day. In the 31 events since then, participants have donated more than $29,000 to benefit such local organizations as Sunshine House, Coventry Care, Northern Door Children’s Center, Door County Healthy Families Program, Feed My People, Koinonia Kupboard, Help of Door County, Neighbor to Neighbor, Door County Habitat for Humanity and DOOR CANcer.

Although the crowd on July 9 was smaller than usual, their generosity after hearing Steve Vickman, executive director of HELP of Door County, describe the services the organization provides resulted in one of the largest collections ever. The $1,320 donated included $200 from the memorial fund of the late Ken Beausang, a former member of Zion who loved to sing.

Joan Vahey, a member of Calvary UMC, was the accompanist for the July 9 event, as has often been the case. An unexpected emergency kept Rev. Heeringa away from this hymn sing for the first time ever. In his absence, the singing was led by Zion’s pastor, Rev. Michael Morris, and his wife, Jolene. A social hour followed.

The next hymn sing will be at 5 pm Sunday, Sept. 3. Zion UMC is located at 8781 County F, between Baileys Harbor and Fish Creek. The community is invited to attend.