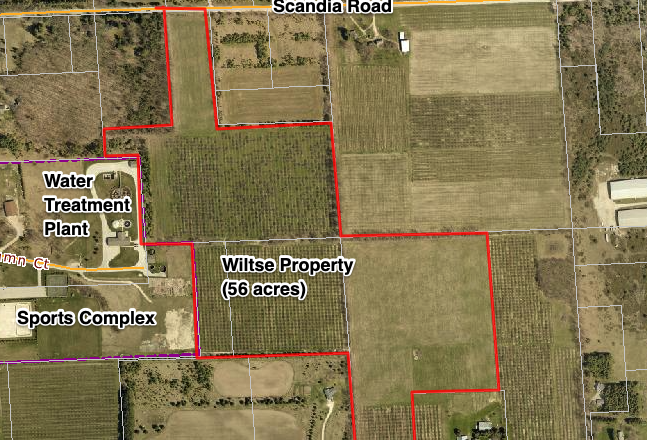 Sister Bay is exploring options for uses of the 56-acre Wiltse property between County ZZ and Scandia Road.

At Monday’s Sister Bay Parks and Properties meeting, Village President Rob Zoschke made a push for the village to think big about prospects for the downtown core and the 56-acre Wiltse property that the village acquired last year.

“This is a chance to think generationally,” Zoschke said.

The village did just that in 2007 when it purchased Helm’s Four Seasons resort to expand the public beach. That sparked a wave of public improvements, including acquiring two additional properties to create 1,800 continuous feet of public waterfront. Improvements to Mill Road, expanded sidewalks, new street lighting, marina enhancements and the construction of the village sports complex all followed.

At the time, the village was desperate to attract business and investment. Now Zoschke wants the village to think big in terms of managing the business those moves created. That includes addressing parking needs, nonmotorized transportation and housing.

He’s asked all village committees and interest groups to provide input for what could be done with the Wiltse property and suggested that the village should plan to move the operations of its administrative buildings, parks and maintenance facility, and village hall to the property that abuts the sports complex between Highway ZZ and Scandia Road.

“We could then remove street parking on one side of Highway 42 to add bike lanes through town to truly be the leader in creating a bike-friendly community for families,” he said. “The coming generations are going to want that and need that.”

Zoschke said the village could sell the administration property downtown, as well as the village hall. That suggestion drew surprise from fellow trustee Denise Bhirdo.

“Did I hear you correctly, or did you suggest we sell the village hall and break up the public waterfront?” Bhirdo asked.

Village trustee Chad Kodanko said it was good to put all ideas on the table, but that wouldn’t mean the village is anywhere close to committing to them. When the village initially embarked on the Waterfront Park project, early iterations called for moving the village hall to open more public space, but not to sell the property.

As for a parking garage, Kodanko suggested that a simpler solution would be to reconstruct South Spring Road to add parking along one side of the street – an idea the village has discussed for years.

Zoschke also said the village should consider setting aside a portion of the Wiltse property for the village to develop housing for village employees and fire department staff.

The village will be gathering feedback from additional committees during the coming weeks.

Lighting the Way for Mental Health

The village approved placing a Mental Health Awareness Lighthouse at Waterfront Park. Deputy Chris Ott of the Door County Sheriff’s Office explained that the five-foot wooden lighthouse displays messages of hope and a hotline phone number for people who need help to call to  become aware of the resources that are available to them.

Bhirdo asked the village to erect new “No Parking” signs along Mill Road beyond the beach parking lot. On busy days, cars park on both sides of the street by the Sister Bay Yacht Club and farther up the narrow road, making it difficult for emergency vehicles to get through.

“We have taken off mirrors on cars with ambulances going down some of the roads in the village,” said Sister Bay/Liberty Grove Fire Chief Chris Hecht.

Kodanko said the village needs to do more than put up signs.

“We can’t just put up ‘No Parking’ signs everywhere,” he said. “We’ve got to address the roads and create places to park.”

Zoschke, who took office as president in April, asked the committee why Sister Bay is one of the only communities that does not place crosswalk signage in the roadway to protect pedestrians.

Bhirdo said the Parks Committee has discussed the idea at least six times and has always been turned down. She said there are concerns that drivers will overcompensate to not hit the sign in the middle of the road and end up hitting parked vehicles, as well as concerns that when pedestrians see the sign, they may just enter the crosswalk without looking for cars.

Numerous studies from universities and the U.S. Department of Transportation have shown that such signage results in more pedestrians using marked crosswalks, and more drivers yielding to pedestrians.

Kodanko reminded her that pedestrians have the right of way and that it is the responsibility of drivers to look for pedestrians at crosswalks.

Hecht said the signs do present concerns for drivers of emergency vehicles.

“I’m against putting signs in the crosswalk,” he said. “On our narrow streets, it is difficult to maneuver around them. If I interviewed 12 paramedics, they’d all say no. If you want to make them safer, then light your crosswalks.”