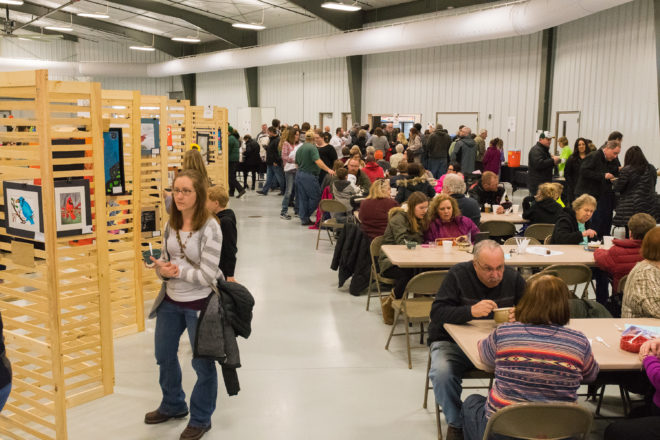 The bobcats at Bruemmer Park Zoo in Kewaunee are one step closer to having triple the amount of room to roam thanks to more than 500 attendees of last weekend’s 4th Annual ZoupArt fundraiser. 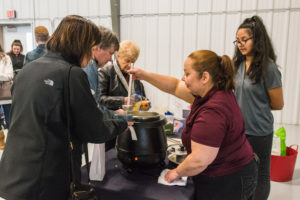 Popcorn soup being served by Hotel Stebbins during the 4th Annual ZoupArt in Kewaunee. Photo by Len Villano.

This annual event, held at the Kewaunee County Fairgrounds, supports the rebuilding of the 80-year-old Bruemmer Park Zoo. For $10 admission, guests were invited to select a handmade bowl (glazed by area students) to taste soups donated by 17 Kewaunee County restaurants. This year’s soup award – a Retro 11-quart Stock Pot Kettle Rethermalizer – went to Gibs On The Lake for their Creamed Cabbage and Smoked Knockwurst soup. It was Gibs’ second consecutive year of taking home the event’s top honor.

A raffle, pottery demonstrations and a student art show rounded out this year’s event.

“They raised just over $6,000 and they had, I would say, 500 people come through the doors for the event,” zoo director Dave Myers said. “That was their highest attended ZoupArt event they’ve had.” 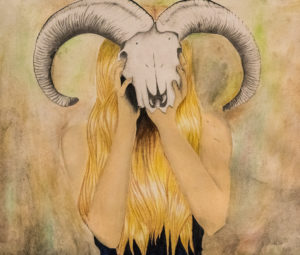 “Untitled” by Zoe Zimmer, on exhibit during this weekend’s ZoupArt event.

The Zoological Society of Kewaunee County is the nonprofit behind ZoupArt and the zoo’s other annual fundraising event, Zoobilee. These events bring in more than $10,000 every year and when combined with donations and membership drives during the past few years, contributed approximately $70,000 to replace the goat/sheep and arctic fox cages.

“All money is given to the zoo,” said Pam Zander, president of the zoological society. “The zoo has been there since the 1930s so we are replacing all of the fencing, making all of the exhibits larger for the animals that we have, we’re taking care of those first…in the spring we’re starting our bobcat pen which will almost triple in size and that will be all new fencing and new housing for them. Once that is all done, there’s a lot to do down there. The steps coming down, we’re in an old stone quarry so those we’re going to work on getting replaced.” 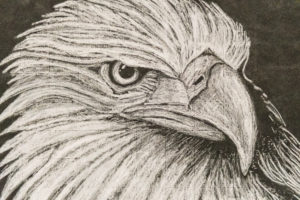 “Eagle” by Alex Hlinak, on display at this weekend’s ZoupArt in Kewaunee.

The zoo’s next fundraising event, Zoobilee, is scheduled for Aug. 26, 2017. For more information on the zoo or to donate, visit BruemmerParkZoo.com.

Bruemmer County Park is located at East 4280 County Road F, at the intersection of Roads F and C, about two miles northwest of the City of Kewaunee. It is open year round from 7 am to sunset, and admission is free. For more information, call 920.388.0444.