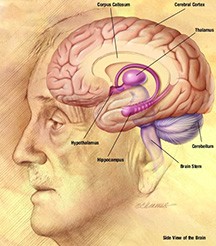 Studies suggest that during the lifetime of a person, the brain continually rewires itself as a result of experience. For example, the brain circuits of most veterans with Post-Traumatic Stress Disorder have been modified due to experiences in combat. But because the brain is highly plastic, with effort the veteran’s brain can rewire itself to deal with the non-combat environment. Brain plasticity is also reflected in recent studies showing that a teenager’s IQ (intelligent quotient) can rise or fall as many as 20 points, depending on experience. IQ tests are designed to measure language skills, spatial ability, arithmetic, memory, and reasoning, with a score of 100 considered to be average. The plasticity of the brain is something not to be taken for granted, and if you start out with an IQ of 100 and become a couch potato, your IQ is likely to fall. Use it or lose it. (Sources: Brain in the News, Dec., 2011)